Cheryl Fagan wants to talk about sex. The 28-year old has a vision to revolutionise the conversations we are having about sex, to remove the shame and awkwardness. 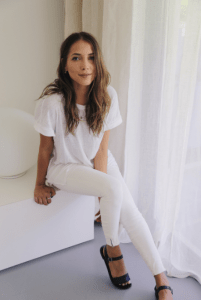 Cheryl Fagan is the author of ‘On Top: your personal study guide to holistic sexuality.

“As young Christians, when sex isn’t talked about or when it’s talked about awkwardly, that can sometimes tell young people that God is not for sex, that he’s against it, that we shouldn’t ask about it and shouldn’t talk about it,” she tells Eternity.

“But the Bible is sex-positive, and there is sex all throughout the Bible. I think what that can tell young Christians is that sex is God’s idea and that he has a purpose for it.”

Cheryl and her husband Sam are pastors at Hillsong’s Inner West Campus in Sydney, where they minister to young people. But Cheryl’s passion for healthy conversations about sex goes back a long way.

First, she grew up in a home where it was normal and natural to discuss sexuality, and says that conversations often ended up being about sex, relationships and dating, so she never found the topic awkward. But more importantly, when she was in her first year of university, she was deciding whether to have sex with her then boyfriend, which is when it all got real.

“Everyone around me was having sex and it was completely normal, and I didn’t think I wanted to wait or anything like that, I just wanted to wait for the right time, what seemed like the smart stage in the relationship to have sex.

“In church, [sex] was kind of talked about in a really shameful way, but at school it was like ‘here’s a condom, don’t get an STI this is what they look like,’ and then my parents had talked about it with me. So I had all these questions,” says Cheryl.

She had dropped off going to church several years prior, but suddenly thought maybe the Bible would help her make her decision.

“I’m not sure where I found this Bible, but I got one and I started researching and I realised the Bible talks so much about sex. It’s not just negative and saying don’t do it ’til you’re married, but there’s helpful information.”

From there, Cheryl decided she wanted to learn more about the various aspects of human sexuality and how it affects young people, and she also committed her life to following Jesus.

“Sexuality is a normal part of who we are, our being, and it’s okay to talk about it. So what I want to do is help people know what sex actually is, why it’s important, and why its valuable. And then help them learn how to make healthy decisions for themselves, figuring out what your values are, and make choices that align with your personal faith and values.”

Cheryl is a committed Christian and believes that sex is best within marriage.

“It is clear throughout scripture that God’s design for sex was in marriage and it is used to bring unity and make babies and bring pleasure to each other. That’s not a God who says sex is bad and we should be ashamed of it. It’s just saying this is what I created sex for and this is the best time for it so that you can have a healthy sexuality or a healthy relationship.”