What kind of Christian is Bill Shorten?

Both the Prime Minister and the Opposition Leader describe themselves as believing Christians. Malcolm Turnbull was raised a Protestant, but, in his 40s, became a Catholic; Bill Shorten was raised a Catholic, but, in his 40s, became a Protestant. What have been the key religious influences upon them? To what extent is their faith reflected in their politics?

For all but the very rich, there used to be three verities of a Catholic upbringing in Australia: go to mass, join a union, support Labor. Shorten, born in 1967, complied dutifully. 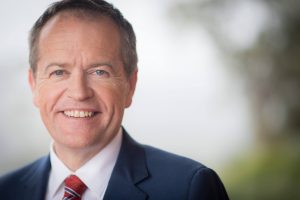 The key influence in his life was his mother Ann, who died in 2014. Ann’s two younger sisters were nuns, and she seems to have been a woman of sure if not dogmatic faith herself. Throughout their childhood she took Bill and his twin brother Rob with her to Mass each Sunday, at the Sacred Heart in Oakleigh, in south-east Melbourne. (There, thanks to Ann’s motherly sixth sense, Bill and Rob evaded contact with a priest later exposed as a paedophile, Father Kevin O’Donnell.)

There appears no doubt that Xavier College was a formative influence on the teenage Shorten. He was never especially devout, nor much interested in theology, but he took away one core message. This is evident from his recent campaign book, For the Common Good, which begins and ends with proud reference to Jesuit teachings. Such self-serving electioneering tomes must be treated with caution, of course. But it was an interesting choice for a left-wing leader in 2016.

Shorten laid emphasis on the stirring injunction of Spanish priest Pedro Arrupe: “be men and women for others”.

“I am a Christian and a supporter of marriage equality under the law”. – Bill Shorten

It is fact of Australian history that such messages – the whole edifice of Catholic social justice teaching – have long been influential within the Labor Party, especially for those of Irish working-class heritage. In this tradition, the Beatitudes and Matthew 25 are paramount passages. Shorten stands in a line of Labor Prime Ministers who were Catholic born and raised, from Jim Scullin through Ben Chifley, John Curtin, Paul Keating and Kevin Rudd.

Only Scullin, Chifley and Keating stayed in the church of their birth. Shorten has followed the path of Curtin and Rudd, by converting as an adult to a form of liberal Protestantism.

In Shorten’s case there were two inter-related factors. First, in 2008-09, he wished to obtain a divorce and then re-marry. His first marriage, to Debbie Beale in 2000, had been conducted under Catholic rites and was thus indissoluble in his Church’s eyes. Chloe Bryce (who became his second wife in November 2009) was an Anglican. Second, in his own words, he “had come to disagree with the Church on a number of issues: stem-cell research, the right of women to control their own bodies, priestly marriage, and, more lately, marriage equality.” He might have added divorce and re-marriage.

At all events, his marriage to Chloe took place at St Thomas’ Anglican Church at Moonee Ponds, in Melbourne. He has since referred to it as his “local” church. Interestingly, St Thomas’ now has a woman priest, Rev. Vanessa Bennett, whose sermons are quite evangelical in flavour. Rev. Bennett responded to a query from me as follows:

“It is my belief that Mr Shorten regards St Thomas’ Moonee Ponds as his local church and that he had a good connection with my predecessor, Rev. Alan Colyer. Having only arrived in the parish this year I am yet to meet Mr and Mrs Shorten and am looking forward to the opportunity once he returns from the campaign tour.”

In a speech to the Australian Christian Lobby in 2014 – worth reading in full – Shorten revealed a hitherto unappreciated religious side. He quoted Jesus, Pope Francis, Martin Luther King and John Wesley. And he argued that “for Australians of faith, religion is a base to build upon in public life”.

In the same speech he also said: “I am a Christian and a supporter of marriage equality under the law”. Few evangelicals will find his reasoning persuasive, but, at least on that day, Shorten spoke respectfully about alternative points of view. He has also fought internally to ensure that federal Labor MPs retain a conscience vote until 2019, by which time it looks inevitable the matter will be decided.

More recently, during the 2016 campaign, Shorten has promised if elected to preserve the current exemptions for religious institutions in Commonwealth anti-discrimination laws, and the saying of the Lord’s Prayer before each sitting day of Parliament.

Roy Williams is the author of In God They Trust? The religious beliefs of Australia’s prime ministers 1901-2013 (Bible Society, 2013) and Post-God Nation? How religion fell off the radar in Australia … and what might be done to get it back on (ABC Books, 2015).