Eight Canberra Catholics, including a priest of the Archdiocese, received an official police warning on April 15 for allegedly breaching the exclusion zone around the ACT Health Centre in Civic.

The group, which has held weekly pro-life prayer vigils outside the facility for more than 17 years, was gathered outside PJ O’Reilly’s Irish Pub on West Row when police asked them to move elsewhere.

Seventy-five-year-old Kerry Mellor decided not to move from the location, and was consequently fined $750.

The Health (Patient Privacy) Amendment Act 2015 Bill, introduced in the ACT Legislative Assembly by Greens Minister Shane Rattenbury and passed on October 29, established the exclusion zones, which came into effect on March 22.

The Bill prohibits behaviour that attempts to stop a person from entering the building, as well as “a protest, by any means… in relation to the provision of abortions” in the facility. 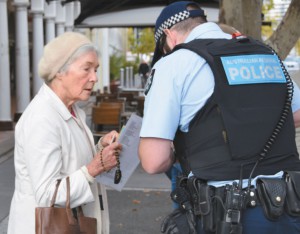 Participants in the weekly prayer vigils outside the ACT Health Centre in Civic were given a police warning on April 15. Credit: Matthew Biddle

Mr Mellor, who has been attending the prayer vigils for the past 12 years, told Catholic Voice he was convinced the police had made a mistake.

“We do not believe that we are protesting,” he said.

“We are praying, which is directed exclusively to almighty God and his Blessed Mother. It’s not a protest, it’s a petition that God will act to change the hearts and minds of people.

“It’s also an ancient tradition to pray for the dead, including the innocents killed here – we pray for their souls, and we make a small act of reparation for this horror committed in our midst, in our community.”

Contrary to media reports, the pro-life group does not hand out anti-abortion material, nor do they engage in conversation with individuals entering or leaving the health centre.

Rather, the group prays a Catholic prayer including the Rosary.

Mr Mellor said he had taken legal advice, and would not be paying the $750 fine, which could lead to a trial in the ACT Magistrates Court.

“I have made a formal request that the charge be withdrawn, on the basis that our quiet prayer cannot possibly be interpreted as any of the types of ‘prohibited behaviour’ in the legislation. I’m awaiting the outcome,” he said.

Mr Mellor also said it was important that the official interpretation of the rules in relation to the exclusion zone be clarified to all parties.

“We’ve had conflicting advice, which makes it hard for everyone,” he said. “It’s in the interests of police, as much as in our own, to have clear definitions of what the law says we can do, and what it says we can’t do.”

Last year Archbishop Christopher Prowse took part in a prayer vigil outside the facility during the annual ’40 Days for Life’ campaign.

Later, after the Bill establishing the exclusion zones was passed, he described the legislation as “cold and clinical”.

“It completely ignores the complexity of the abortion issue itself,” he said at the time.

“The real issue is trying to assist fragile women with unwanted pregnancies to consider deeply options other than abortion.”

* This story was originally published at Catholic Voice, you can read it here.