A prayer for the persecuted church 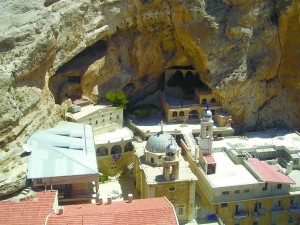 St Thecla monastry in Maaloula, a Christian village northeast of Damascus, Syria. Taken by Al Qaeda linked rebel forces in September, retaken in turn by the Syrian Army, the Jihadists, then the army again.

On 21 October 2013, Islamist rebels linked to al-Qaeda invaded Saddad and Haffar, two Christian villages in Syria. One week later, dozens of Christians were dead, thousands of families had been forced to flee or used as human shields. Far from being an isolated incident, the siege is part of an accelerating trend of targeted anti-Christian violence in the country. The very existence of the Church in Syria is under threat.

If nothing is done to reverse this trend, Syria could go the way of Iraq. Hundreds of thousands of Iraqi Christians have been forced to flee because of a huge surge in anti-Christian attacks since the US-led invasion in 2003. The Christian community in Iraq has been reduced to a quarter of its size. Many Christians fled to Syria, where they are seeing history repeat itself.

In Pakistan, our brothers and sisters are reeling from the country’s deadliest anti-Christian attack. More than 100 Christians were killed, or died later of their wounds, when two suicide bombers targeted All Saints Church in Peshawar on 22 September 2013. Some worshippers who came to church that morning with their entire immediate family, returned with nobody. The Pakistani Taliban, responsible for the attack, said it would continue to attack “foreigners and non-Muslims” until US drone attacks in the region ceased.

In Nigeria, atrocities are committed weekly by the violent Islamist group Boko Haram. In its attempt to create an Islamist state in the North, the group brutally attacks Christians and other targets in Northern and Middle Belt states. In 2012, almost 1,000 believers were killed, making Nigeria the most lethal country for Christians.

We must ask why our brothers and sisters are being so mercilessly targeted. Although persecution has many causes, one major contributing factor is perhaps a surprising one: Western foreign policy. Western intervention in Iraq and Afghanistan has made the Christian minorities in these countries more vulnerable. In Syria, Western governments are backing the side that aims to destroy the church. The revolution in Syria may have been begun by pro-democracy activists, but the opposition is now dominated by Islamists, who are fighting to create a state in which Christians would not be welcome.

The influence of political Islam since the Arab Spring has also led to Christian persecution. Although Islamists played hardly any part in the revolutions in Egypt and Tunisia, their power in those countries was strengthened. Anti-Christian attacks and arrests for blasphemy increased during Egypt’s year of Islamist rule, and since the second revolution, Christians have been scapegoated for the fall of former President Morsi and attacked.

The effect of violence on our Christian brothers and sisters is devastating. Threatened or actual attacks create fear and uncertainty about the future. Christians forced to flee are often left desperately poor. In Nigeria, Egypt and Pakistan, they must live with the possibility of full-scale insurgencies leading to civil war. And for many, as for the victims of the attack on All Saints Church, following Jesus in a hostile context has cost them their lives.

And the expression of anti-Christian persecution is not limited to violence. Oppression and harassment by the authorities can be devastating. In Saudi Arabia and North Korea, Christian worship is outlawed altogether. The authorities in many Communist and ex-Communist countries are often strongly opposed to religious freedom. And persecution is sometimes implemented through the legal system; for example in Indonesia and Central Asia, church registration is compulsory yet almost impossible. In India, anti-conversion laws are misused to restrict legitimate Christian evangelism. And wherever sharia law is enforced, Christians face official discrimination and many restrictions, with converts gravely endangered.

So how should the Western church respond? We must be moved by concern and empathy for our brothers and sisters. In a world where mainstream media largely ignore the plight of Christians, we must make sure we stay informed. We must advocate politically for believers in need, and we must share with them the material blessings God has given us. Above all, we must pray continually (1 Thess 5:17). Join me in praying for persecuted Christians:

“Almighty and most loving God, the Father of mercies and God of all consolation, whose compassion never fails, save your persecuted people. As they pass through the waters of adversity, may the rivers not overwhelm them. As they walk through the fires of affliction, may the flames not consume them.

“O God, make them firm in their faith, joyful through hope, fill them with Your love, protect them from the wiles of the devil and the conspiracies of men. So that, passing through the waters, they may come at last to the land of everlasting life, there to reign with You forever.

“In the name of the all-powerful and triune God, Father, Son and Holy Spirit, Amen.”

This article is adapted from a talk given at the Global Anglican Futures Conference in Nairobi in October 2013.

And other women the Church forgot

At least 100 men, women and children were slaughtered in Sobame Da – a mainly-Christian…