Climate Change Part Two: Why the church is part of the problem

Byron Smith recently launched an online petition to call for the Sydney Anglican Diocese to divest fossil fuels from its roughly $120 million endowment. The petition includes the words: ‘This is important because profiting from activities that harm our neighbours … is a breach of the Lord’s command, dishonours the Creator and compromises our witness and mission.’

In Part One, Smith says “while there are still debates about the details, the big picture has been clear for some time: human actions are causing serious damage in myriad ways to the complex systems on which life depends.” He goes on to argue that Christians should take heed of the words of Jesus and apply them to the issue of climate change: “And so when I reflect on what Jesus said was the first and greatest command – to love God with all our heart, soul, mind and strength – I cannot reconcile this with what we are doing to his handiwork. And when I turn to his second command – to love our neighbours as ourselves – I cannot reconcile that with the damage and the suffering that this is already causing, let alone the projected impacts.”

Echoing his research, Smith says the rate of environmental change caused by global warming is accelerating: “Indeed, the situation is dire enough for many experts to talk about the genuine possibility of civilisational collapse. Note that this does not mean the end of the world, just the end of the world as we know it.”

Below is Part Two.

This kind of massive change has happened before: when the Western Roman Empire collapsed. This was a self-consciously Christian empire yet God allowed it to undergo massive political, cultural, economic and demographic upheaval. At one point, over a period a couple of hundred years, the population of western Europe halved. For those involved, it was the end of the world as they knew it.

To awaken to the scale of the threats involved and to acknowledge one’s own involvement in contributing to the problem brings many uncomfortable and undesirable emotions: confusion, fear, guilt, anger, grief, impotence. Often it is easier to find various excuses to avoid having to face such emotions: “It can’t be that bad”; “God won’t let us hurt ourselves too much”; “Things have changed before and we’ve been alright in the end”; “Humans are too small to cause such large changes”; “Technological breakthroughs will save us”. Such half-truths and wishful thinking can be comforting, but they don’t do justice to God or our situation.

The good news is that Jesus walks with us in our grief and confusion, he draws the sting of guilt and invites us into a space where we can be honest with ourselves and with one another. He banishes our selfish fears, but deepens our concern for the plight of our neighbours, inviting us into a path of costly service, trusting in the God who raises the dead.

None of these issues is going away anytime soon. There is enormous momentum behind the various drivers of change. Responding well takes time, effort and attention; it risks bringing into question a number of our unexamined habits and assumptions; it may take us outside our comfort zone personally and communally. It may mean examining some cherished ideas afresh to see if they are scriptural or merely cultural.

But ignoring these matters or leaving them for a small group of “greenies” cannot be maintained as a responsible course anymore. Climate change and the broader ecological crisis are now part of the context within which contemporary Christian discipleship and mission occur. Let us follow Christ, who is the same yesterday today and forever, into the unchartered territory in which we now find ourselves, discovering afresh the grace of Christ, the love of God and the fellowship of the Holy Spirit.

As one piece of the puzzle, I believe that as a church we should examine how we are using our money and the ways in which we might be investing in the causes of these problems, rather than investing in solutions. Therefore, I am urging the Sydney Anglican Diocese to consider divesting its endowment from fossil fuel companies, whose business model depends on burning far more carbon than is compatible with a planet hospitable to life as we know it. 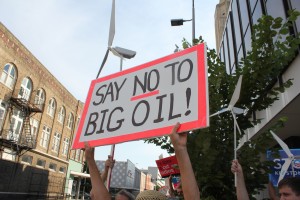 Given the likelihood that governments will ultimately take considerably more decisive actions to limit carbon emissions, there is also a straightforward regulative risk in investing in companies whose share price is dependent upon the assumption that they will get to extract and burn all their fossil carbon reserves. If and when governments do act, the value of fossil fuel companies is likely to drop dramatically. Dozens of universities, churches, city governments and super funds have either already divested or are actively considering doing so. For both ethical and financially prudent reasons, divestment makes a lot of sense.

The total amount we’re talking about taking away and reinvesting elsewhere is pretty tiny in relation to the global size of these companies. Nonetheless, for mid-sized institutions like universities, city governments and churches to divest sends a strong moral message, undermining the social license of these companies to operate and limiting their ability to lobby government and shape policies in their own favour.

Consider the tobacco industry: a few decades ago, it was widely considered to be an upstanding (and highly profitable) piece of the economy, yet the withdrawal of approval by an increasing number of public health and community bodies shifted the playing field, making much tighter regulations more thinkable, and subsequently, smoking rates have dropped to something like a quarter of what they once were in this country.

Or consider South Africa: both Nelson Mandela and Archbishop Desmond Tutu credited the international divestment movement that started amongst universities and churches as being one of the most significant pieces of the puzzle that lead to the downfall of Apartheid. Archbishop Tutu has been vocal in his support for fossil fuel divestment today.

Of course, there are many urgent, pressing, important and worthy issues out there. Christians can engage in careful attention and loving service of our neighbours in all kinds of ways. There are other examples of grave injustices, where the powerful exploit the poor.

(a) Climate change is one of the few truly global issues; our actions and inactions have consequences for billions of people. Generally, those who have done least to cause the problem are those who face both the earliest and the worst consequences.

(b) Once we burn sources of fossil carbon, much of the extra carbon stays in the atmosphere, oceans and biosphere for hundreds and even thousands of years. So our actions and inactions have consequences for many, many generations to come.

(c) It is not going away. The structure of the climate predicament in which we find ourselves means that it is easy for things to get worse, but difficult to improve. Our best efforts may succeed in avoiding the worst case scenarios, but whatever we do, we are still going to have to face some nasty consequences for our activities to date.

Byron Smith is a PhD candidate in Theology at Edinburgh University, and a blogger at nothing-new-under-the-sun.blogspot.com.

Front page and above image used under a CC license, from Fanboy30 and 350org respectively.