For four months over the summer of 2014-2015, a collection of the garments of fashion icon Jean Paul Gaultier graced the rooms of the National Gallery of Victoria (NGV). The exhibition, entitled The Fashion World of Jean-Paul Gaultier: From the Sidewalk to the Catwalk, catalogued his designs, from the first dress he created in 1971 to his latest haute couture (intricate, exclusive, and custom-fitted clothing made entirely by hand) and ready-to-wear collections. 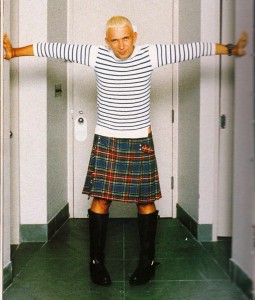 I accompanied my cousin to the exhibition, and while I was a complete novice in the presence of his garments, noting the prettiness of the lace on some of the dresses, she—a fashion student—walked through the exhibition marvelling at his creations. She did not bat an eyelid when faced with corsets and skirts for men, or scantily clad mannequins in cone bras. I, on the other hand, felt an urge to look away, as if what I was looking at should not be on display for the world to see.

Jean Paul Gaultier would become famous for rocking the fashion world with his unconventional designs that blurred gender lines in clothing. Eventually he would earn a reputation as the enfant terrible (a person who behaves in an innovative and often controversial way) of French fashion.

As a child, Gaultier suffered with his different sexual identity, eventually coming out as gay in the 1970s. His battle with his own sexuality led him to create a wide range of looks, encompassing even the hypersexualised and transgendered. He wanted to give all people the “freedom to choose their own, whether ‘butch’, ‘boy toy’ or anything in between”.

He emphasised unconventional beauty by opposing the rule of thin, taking out ads in newspapers saying, “non-conformist designer seeks unusual models – the conventionally pretty need not apply”. In his designs he challenged the idea that there were particular types of clothing that only men or only women could wear. Gaultier wanted man to be able to express his fragility and sensitivity, and woman to be able to assert the masculine side of her personality.

In the mid-1980s, Gaultier wrote a new page into the fashion history books with his collection A Wardrobe for Two, which “reflected his investigation of masculine, feminine, androgynous and alternative conventions. He proposed a post-macho look with the skirt for men,” says exhibition curator Thierry-Maxime Loriot. Around the same time, in his Dada collection, he also gave men the opportunity to don the corset—harking back to the 19th Century English militia who would wear them to improve strength and endurance in battle.

My urge to look away when faced with men in corsets and skirts taps into the fact that we are, on the whole, unused to seeing men in skirts—with the limited exception of kilts and cassocks. We are even less accustomed to seeing men (or women for that matter) in corsets. The whole idea of a corset for anyone seems antiquated—unless, of course, you happen to have just stepped into a Jane Austen book.

In the West, men’s clothing generally does not include skirts, or skirt-like garments. Fashion sensibilities outside the West tell a different story. In several countries in South Asia, for example, men commonly wear garments that have a similar appearance to a dress.

But the feeling of discomfort deserves exploration. Though it might be tempting, wholesale dismissal of Gaultier’s designs on the basis that gender lines in clothing ought not be blurred actually fails to recognise that the distinctions have already been messed with, and the outcomes haven’t been all bad. 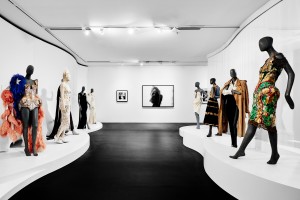 Over the last 100 years the spectrum of women’s clothing has slowly expanded to include trousers and shirts, while the spectrum of men’s clothing has remained suspiciously monochrome. The cyclical nature of Western fashion (note the return of wedges, culottes, high waisted skinny jeans, and b0ld prints on women’s trousers or men’s shirts) actually serves to reinforce our particularly one-sided fashion rules for men and women.

When many women entered the work force for the first time during the First World War, it was common for the women to alter their husbands’ pants and wear them to work. Although actress Katherine Hepburn was often photographed wearing trousers in the 1930s, they really only resurfaced in the Second World War as women once again filled the jobs left vacant by men going to work. It wasn’t until the 1970s that trousers for women really gained traction in society. Not many among us would wish to return to the days when women weren’t allowed to wear pants.

On the other hand, men’s fashion has relaxed, but not substantially changed. Men are no longer required to wear three-piece suits, complete with pocket watch, but on the whole they still wear the same type of clothes. Trousers are still the traditional masculine fare in Western society. No matter how many times the wheel of fashion turns, it never really turns in the direction of encouraging men to dress in skirts.

It is an illogical social convention that allows women to wear pants while passing judgement on men who choose to “cross dress”. While our understanding of elemental female gender identity has shifted to the point where women are afforded a great degree of latitude in their fashion aesthetic, conventional male gender identity remains solidly based in particular modes of dress. There are, of course, plenty of examples of gay and avant-garde men who challenge these conventions, but for most men the fashion limits of male gender identity begin and end with the wearing of trousers.

So his designs cannot be dismissed out of hand on the basis that gender lines in clothing ought not be blurred without also advocating for a return to the time when women were not allowed to wear pants. 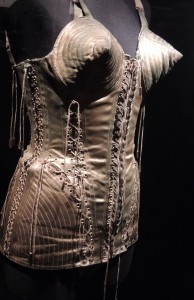 If, as Christians, we want to say that there is something essentially important in men wearing pants (or not wearing skirts), then the question Gaultier asks us is “Why?”

Christians, on the other hand, have tended to weave these two things together. It is not enough to simply note that God created male and female (Gen 1:27), these male and female bodies are then infused with meaning. There are ideas about what it means to be a man or a woman, and these ideas exist because of biblical passages. Women should not focus on jewellery and fancy hairstyles, but inner beauty (1 Pet 3:3-4). Men ought to pray, instead of disputing with one another (1 Tim 2:8). And women should not wear men’s clothes, nor men wear women’s clothes (Deut 22:5). Christians uphold cultural expressions of gender difference out of respect for the sex difference God created.

Gaultier has invited us to ask of our culture, “What does it mean to dress as a man in 21st century Australia?” The answer is up to us.

It is easy for Christians to place a lot of stock in the importance of gender distinctions. We have well entrenched ideas about what it means to dress as a man or a woman in the church in 21st century Australia. But these norms can be challenged and changed. They are not as static as they seem. Gaultier has invited us to ask of our culture, “What does it mean to dress as a man in 21st century Australia?” The answer is up to us.