Doris and Alwyn Pfeffer have been married for 70 years.
Carinity
Australia family

More than 75 years ago two neighbours become good friends – and then more – in a tiny farming community west of Beaudesert, Queensland.

This year, COVID-19 has kept them apart but, now, lifelong sweethearts Alwyn and Doris Pfeffer have been reunited. They also reached a major milestone.

Doris, 91, lives at Carinity Hilltop aged care in Kelvin Grove, Brisbane. Alwyn, 94, is still in the family home of 70 years at Ashgrove – about four kilometres from Kelvin Grove.

Alwyn visits Doris almost every day and is assisted at home by Carinity Home Care.

Doris and Alwyn met as children at Charlwood State School, in Queensand’s Scenic Rim region, and grew up on neighbouring dairy farms.

They didn’t attend high school as they worked on the family farms but caught up at Sunday School at their local church. They also attended the same community functions.

After being paired together for a community bushwalk at Cunninghams Gap in the Great Dividing Range, the then teenagers began courting and were engaged five years later.

“We were paired off for the walk and Doris and I were a pair – and we’ve been a pair ever since,” Alwyn says.

Alwyn and Doris were married in Kalbar on 11 November 1950 before moving to Ashgrove. 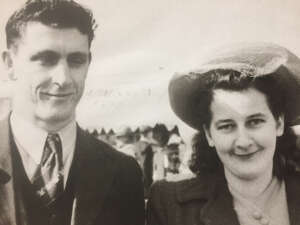 The Pfeffers agree that times were much simpler when they were growing up and in the early years of their courting.

Alwyn worked as a wool classer in Brisbane for more than 40 years while Doris was a homemaker who cared for their three sons.

They are long-time members of Ashgrove Baptist Church, where Alwyn was a Sunday School teacher for 25 years and Doris catered for social functions. They also helped establish other Baptist churches in western Brisbane.

The couple travelled overseas to places such as the United Kingdom and Africa, where one of their sons did mission work.

Alwyn believes a good marriage will endure if couples “have the same goals and hobbies, have good communication, are tolerant, don’t place your own views first, and learn to compromise.”

Doris’ secret to a happy marriage is: “If you have a disagreement just let the other person think they are right – even if you know they aren’t.”

Lee Oliver is Communications Officer at Carinity, which provides community services as an outreach of Queensland Baptists.

Patricia Weerakoon, who laughingly calls herself a 70-year-old Christian sexologist, is excited about her latest…

Celebrating 162 years of taking the good book to the world