Five Australian Christian peace activists escaped the threat of jail and were fined $15,000 this week for trespassing at Australia’s top secret military intelligence base Pine Gap in Alice Springs last year could face up to seven years in jail.

When the “Pine Gap Peace Pilgrims” appeared at Brisbane Federal Court, Justice Reeves told the court he did not wish to make a “martyr” of Jim Dowling, one of the group.

The Christian activists entered the Pine Gap base in September last year to protest civilian deaths in the Middle East, due to the drone programme run by the United States which utilises the base’s communications systems. Their protest took the form of singing a lament, chanting, praying and playing music.

“We came to Pine Gap last September to mark the 50th anniversary of this US military intelligence base in the middle of Australia.” 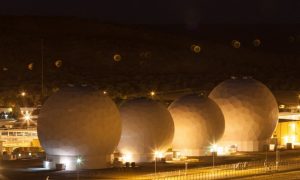 During the trial, Melbourne University professor Richard Tanter testified that Pine Gap supplies geolocation data that is essential for US drone strikes, according to SBS News.

“In the case of Pakistan, Somalia and Yemen, countries with which neither Australia nor the US are at war, this makes Australia complicit in illegal extrajudicial killings or assassinations,” he said.

Eternity asked one of Pine Gap pilgrims, Andy Paine, some questions about the action:

1. What was the aim of the lament and did you achieve your aim?

The five of us who did this lament at Pine Gap are devoted Christians. We try to live this out in a variety of ways; including some of us living in community together where we worship together, try to live simply and communally, open our doors to friends and strangers in need, and resist injustice and violence where we see it.

“We went there to lament – an ancient and very biblical practice. We lamented to bring into the open what really happens at Pine Gap beyond the euphemism of “intelligence gathering”. There are deaths of civilians just like us that can be directly linked to Pine Gap.”

It was Jesus’ call to us to be peacemakers that led us to Alice Springs. We came to Pine Gap last September to mark the 50th anniversary of this US military intelligence base in the middle of Australia. Pine Gap has many functions, among which (most worryingly for us) is gathering signals intelligence used to target air strikes and drone bombings overseas.

Pine Gap operates in extreme secrecy which stops the Australian public from asking the important questions of whether this is something we are happy to occur from our soil.

We went there to lament – an ancient and very biblical practice. We lamented to bring into the open what really happens at Pine Gap beyond the euphemism of “intelligence gathering”. There are deaths of civilians just like us that can be directly linked to Pine Gap. But also the lament was to confront the violence that lives constantly in our world. On the long walk through the bush we could contemplate the roots of sin and violence in our own hearts, our relationships, and our broader society.

2. What was your personal reason for going and how did you feel as you entered Pine Gap? What about after? The road to the Joint Defence Facility of Pine Gap, near Alice Springs in Australia. Wikimedia Commons1 License

I had a couple of reasons personally. One was that I felt my knowledge about the effects of Pine Gap around the world demanded a response. Once I had studied what happens there and heard the voices of those affected by the drones and air strikes, I felt a need to take action. The other reason was a belief that our actions there could actually make a difference. Our action seems very small, and the potential consequences were serious; but I honestly believed that if what we did brought attention to what occurs at Pine Gap and shared a story of ordinary people getting together to resist it; that would make a big difference in a society where we are so often removed from the real effects of the wars our country is involved in and so often feel we have no power.

As we entered Pine Gap it was a mix of very powerful feelings. I felt a great sense of peace in spite of the potential consequences – the peace that comes from acting unashamedly on your beliefs. I also felt a sense of strength from the people that I was with – people I’ve known for years, two of whom I live with and share the everyday struggles of life and faith. We are a supportive and close community that has enabled us not just to get onto the base that night, but to prepare for the court case and everything that entails.

“We were prosecuted under the Defence (Special Undertakings) Act – a charge that carries a maximum penalty of 7 years imprisonment.”

I also felt a sense of revelation. I had read and researched a lot about Pine Gap, but standing there face to face with this powerful and secretive place was like scales falling from my eyes. The huge radomes and satellite dishes of the base were right in front of me, and reminded me of the ordinary humanity of those who operate this technology – and of those who see only its effects on the other side of the world.

3. How did the authorities react? What happened to you?

Police were already there when we walked on, so we were arrested midway through our musical lament. It’s not uncommon for people to engage in acts of civil disobedience on matters of conscience. But unusually, we were prosecuted not under normal criminal code laws but under the Defence (Special Undertakings) Act – a charge that carries a maximum penalty of 7 years imprisonment.

We went to the Alice Springs Supreme Court from November 16-24 on trial. We represented ourselves, and pleaded not guilty to the charge. Not because we deny we were there – we openly admitted to that fact. But we said we were acting lawfully because we were acting in defence of others – the people who suffer from the drone strikes Pine Gap facilitates. We felt happy with the account we gave of ourselves and our action in the court, but unfortunately we were found guilty by the jury and will be sentenced on Monday, December 4 (today, as of publication).

4. How should Christians respond?

We take our choice to follow Jesus very seriously – as a choice that affects every part of our lives. For us, one implication of following Jesus is the call to non-violence. Jesus calls us to love our enemies (Matt 5:43-47), and to live not by the sword (Matt 26:52). He never advocates the use of violence for any cause.

There are loud voices in our society that say our security comes from military power, or from our alliance with a military superpower that drops bombs in faraway places. We believe someone truly seeking to follow Jesus can not accept this. For Christians our security comes in our love for others and our faith in the power of the Holy Spirit to transform people and institutions, and ultimately our world.

“We came to Pine Gap and to the court with nothing other than our own witness.”

We also believe we Christians should accept that following Jesus does not always equal following the laws of our society. Jesus broke laws when necessary, was punished for it, and expected his followers would have to do the same – he says “On my account you will be brought before governors and kings as witnesses to them and to the Gentiles. But when they arrest you, do not worry about what to say or how to say it. At that time you will be given what to say, for it will not be you speaking, but the Spirit of your Father speaking through you.” (Matthew 10: 17-20)

We felt called to intervene in the violence we saw. We don’t think every Christian necessarily needs to do the same thing we did, but the gospel of Jesus is a call to radical, counter-cultural love. Christians should courageously and joyfully try to live that out. 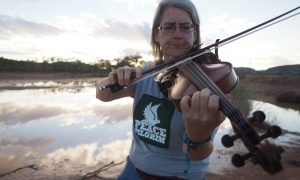 5. Who else was with you in the action?

We were a group of five friends of different backgrounds and ages. Myself, Jim Dowling, Tim Webb and Franz Dowling are all involved in the Catholic Worker movement in Brisbane. Margaret Pestorius is a social worker from Cairns. We all had different abilities we brought to the group.

The idea of a musical lament came from Margaret. She was very taken by the prophetic books of the Old Testament and the way they grieve injustice. She said “Grief is not always pain. With the power of the Holy Spirit, grief can transform and transfigure.”

We all believed one of the important things about our action was not just what we were against, but what we were for and how we lived that out. We came to Pine Gap and to the court with nothing other than our own witness – ordinary people doing what we could in response to what we saw as a great crisis. We tried to show our message not just in articulating the violence of Pine Gap; but in showing an alternative in how we related to each other, to others we came into contact with, and to the court and military institutions. For us peace is the goal we hope to arrive at, but it is also the method by which we hope to achieve it.

“The purpose of measurement is to stop doing the stupid stuff,” Katie Delahaye Paine declared…