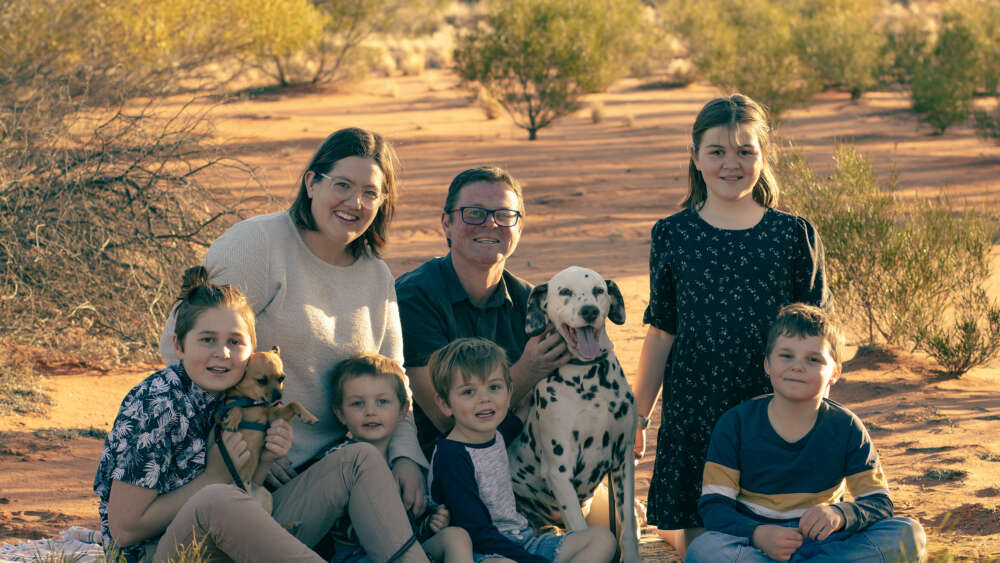 Glen McDonald was shocked when Bush Church Aid’s Mark Short asked him to go and lead the church at Roxby Downs, a town nestled on hot red sand 563km from the creature comforts of Adelaide.

“Roxby?” he said incredulously? “With five kids? No, that’s not in my plans!”

The McDonald family had no desire to move to the remote mining town which had been purpose-built by BHP and which was once the most controversial town in Australia because of protests against uranium mining at the Olympic Dam Mine in the 1980s.

Glen had a grand plan to stay on as chaplain of the Juvenile Justice Centre in Wagga Wagga in NSW, and do some community chaplaincy in the town, but couldn’t find any financial support for that. He knew he had to leave Junee, where he had been serving as a minister because the financial viability of a full-time minister was no longer sustainable. But Roxby Downs was certainly not the solution he was looking for.

“But then knowing that we had to leave Junee, I felt obligated to share with my wife – and her initial reaction was no,” he recalls.

Not only did Roxby not fit in with their ministry plans, but they were concerned about accessing necessary services in such a remote place for the development of one of their children.

But BCA’s motto is “Never too far, never too few”, so when Mark, the former national director of BCA, asked them about moving to Roxby, Glen and his wife Beth prayed about it and “we realised there’s actually no reason not to go, so we thought well, why not? And so here we are.”

After 3½ years as minister at Roxby Downs Christian Community Church, Glen can say that with five kids aged from 15 to five, the challenge has not been so much coming to an isolated place but struggling to find close friends in such a transient population of about 4,000 people. He says his two eldest children have found it particularly hard to leave relationships behind and start afresh somewhere new.

“One of the anomalies of Roxby Downs is people come and go regularly, and one of the challenges for Zac, my eldest, was he had made a friend in the first little while here, and then he soon left. That was a matter of him trying to find his place and where he fits into the whole scheme of things. He doesn’t need a lot of friends but he needs close friends, and he just struggled to find those close friends,” Glen explains. There have been sacrifices involved in education too, especially for Zac and the next eldest, Lili, who are quite academic, but don’t receive the support to stretch themselves they would elsewhere because many high school-age children leave Roxby to attend boarding school or their family moves to gain access to educational opportunities.

“But one of the things we’ve always said is we’ve never wanted education to be an idol for our kids … if we didn’t have that attitude, coming to a remote area wouldn’t have been viable.”

“We’ve never wanted education to be an idol for our kids … if we didn’t have that attitude, coming to a remote area wouldn’t have been viable.” – Glen McDonald

A connection made with the youth at Holy Trinity Church in Adelaide has been a key encouragement not only to the McDonald children but also to the church.

Not only have Zac and Lili been able to fellowship with other young Christians at camps held by Holy Trinity, but a group of youth came up to Roxby Downs last October to run a holiday program – which helped build the children’s ministry because most of the children who came had no previous connection with the church.

“So we’ve been working hard at building those relationships in the community and having that presence. One of the great things that the Trinity mission had was a focus on the demographic of youth and children in town, so they enabled us to run a holiday kids’ program, which was lovely and well attended.”

One of the new families lives across the road from the church whose children were curious about what was going on over there.

“And so then when we ran the program that enabled them to come and have a look at church and then we ran another holiday program before Christmas. And they came to that as well,” he says. A kids program run by youth from Holy Trinity, Adelaide, in Roxby Downs.

When the parents of that family came into the church building to vote in the South Australian state election campaign in March, they saw signs advertising another kids program.

“The kids from across the road saw the upcoming program, and they were asking their mum every day ‘Is today the day we’re going to the church program?’ ‘Not yet,’ she would respond.

“There was another family whose son came to the holiday program who was asking, ‘When are the big kids coming back?’ That was his way of expressing ‘When is the mission team coming?’ So he was looking forward to that as well.”

Unfortunately, Glen had to cancel a week-long visit by the Holy Trinity youth group over Easter because of a COVID outbreak in Roxby Downs, but they will receive a warm welcome whenever they manage to get back.

For Glen, the big challenge of building the church is the transient population.

“A number of people left again the next year, so each year our numbers seem to drop down to about 20 or so, and then they grow up again. So the church that we have at the moment is not the church that was here when we arrived. Probably only eight or so are still here, but we had a large turnover last year, and a number of key families left.

“Most of our parish council left and then this year we’ve had a number of key people leave as well, people who were leading church services and things.

“So we’re working hard at trying to connect with people and reconnect with some Christians who moved into town as well in that migration of people, and we pray that God will keep bringing more people to support the ministry – not just to fill numbers but to create a base enabling us to connect into our community and proclaim the gospel.”

Glen sees his biggest challenge as “people being gripped by the need of gospel ministry, particularly in developing children’s and youth ministry”.

“When Zac was about nine, he kept answering all my rhetorical questions in the sermon.” – Glen McDonald

With kids making up half of its current congregation of about 27, Glen keeps the kids in church and tries to involve them much as possible in the music and then have some activities at the back of the church.

“Some of my vision would be to have some directed craft activities for the kids at the back of the church so they will experience church, but also be engaged in appropriate activities which are discipling them,” he says.

“I don’t think we give enough credit to what kids pick up in church. The key for me was when Zac was about nine, he kept answering all my rhetorical questions in the sermon, which was indicative that he was actually listening and getting more out of the sermon than we would necessarily think.

“So I’m motivated to have some kind of directed craft around sermons or engaging with the theme and the topic of the sermon but in an appropriate way for them, but here again, we need other people to get alongside this vision and to see the value in that.”

So does Glen feel God was wise in sending him to Roxby?

“You’ll have to ask the congregation that one! I always question what I am doing but I also see that God is doing great things through us and in us. And so we’re looking at extending our time here because it just feels like God’s got more to be done through us.

“I often feel like I don’t necessarily have all the skills and gifts, but I guess at the end of the day, it’s God who grows his church, not us anyway.”