New Year’s Eve 2019. David Jeffery, owner of the Wave Oasis B&B in Mallacoota, was sheltering at the local wharf as bushfires ripped through his town in Victoria’s East Gippsland region. Thousands of holidaymakers and locals also sheltered with him at the wharf and at the nearby beach.

The morning sky turned to night as thick smoke haze engulfed the town. Some said the nightmarish scene was like that of “armageddon” or the “apocalyse”. But for Jeffery, the event turned out to be, unmistakably, a miracle.

Speaking with Eternity over Zoom a few days ago – after a year when COVID followed the bushfires – he is more convinced of God’s miraculous provision than ever.

“[The bushfires] looked like they would be the death of a lot of things, but God turned it into a resurrection.” – David Jeffery

“Everything has been amazing about this year – everything. It’s been God’s provision – the fact that the whole town wasn’t destroyed, the fact that we didn’t have a single person burnt alive,” Jeffery enthuses.

“God honestly never gives you more than you can handle. [The bushfires] looked like they would be the death of a lot of things, but God turned it into a resurrection.”

One week after New Year’s Eve, on January 6, Jeffery described to Eternity the miraculous change in wind as a firewall – which he says was reported to be 60 feet high and moving at 90 kilometres an hour – bore down on the crowd at the wharf.

“We could hear the roar. It sounded like a thousand freight trains coming at us. Then a huge gust, like someone had opened the door of a furnace, pushed us … It went black as black. The smoke was so thick it was hard to breathe,” Jeffery told Eternity.

But then as Jeffery and a few other “prayer warriors” prayed, he says an easterly wind came out of nowhere and miraculously pushed the fire away from their direction.

“If [God] didn’t answer [our prayers] then, we were dead,” says Jeffery, estimating they only had 30 seconds to spare before the fire hit them.

“It was impossible but he did it. He did that for five minutes, which broke [the fire front] enough to stop it from getting to where we were.”

Jeffery wasn’t afraid to share his version of events with mainstream press. In fact, he became one of the faces of January’s bushfire crisis after being featured on BBC News and SkyNews, as well as the ABC – although he was, incorrectly, labelled by some media as the “atheist who turned to prayer” (when in fact he had been a Christian for 25 years).

“No one could hold back this thing. It was about a thousand degrees and it was moving at 60 to 90 kilometres an hour, racing at the town.” – David Jeffery

In his recent conversation with Eternity, Jeffery confirms his story, saying, “Now I’ve seen the infrared footage from the helicopter and that tsunami of fire coming was no exaggeration. It was massive. The [authorities] were obviously expecting a large loss of life … No one could hold back this thing. It was about a thousand degrees and it was moving at 60 to 90 kilometres an hour, racing at the town.”

According to Jeffery, he knows “non-Christian witnesses” who cannot explain how this extraordinary wind arose to push the  firewall back. And, he says, neither can authorities.

“That wind was so strong coming past us. And it felt so cool. I know it was God,” he says, adamantly.

“The same thing happened when this house got spared,” Jeffery continues, referring his second “miraculous” answer to prayer that New Year’s Eve, when fires were bearing down on his property.

“I had all these witnesses … who said there was a wind that came against the fire and put it out.”

At the time, Jeffery described this event as “so impossible, but somehow God turned off the flames, like flicking off a switch. All the fuel was still there – the houses were still there, the grass was there.”

Today he reflects: “It takes faith [to believe these were miracles]. To those who don’t believe in God, it’s foolishness. We know that, but we don’t want to back down from what God’s done and we don’t want to share in his glory. He deserves all the praise. Whether people understand it or not, it doesn’t matter.”

In the weeks immediately following New Year’s Eve, Jeffery put his spared property – with its bed and breakfast facilities – to good use as the bushfires continued to burn.

“We had a request to open up our property under a state of emergency, really, for a lot of firefighters, for the police, and for the air force,” he says.

“That went on all of January until the roads were opened up on February 5, I think. The fire was finally out for us on about February 15. So until then, I was constantly still wetting and dampening down [the property], putting sprinklers on, just in case the wind blew from the north and we had an ember attack and it started again. So there was no letting up [until all the fires were finally put out].

“After that, I basically had a two-week break and then it was on to the bushfire recovery. We were very blessed with the contractors being here to clean up all the burnt homes. They told me there were 125 homes that were burnt to the ground and another 25 that had to be destroyed – so that’s 150 homes lost in total in the Mallacoota area.

“There were also about 30 sheds, plus the abalone co-op, which was the big one, which is millions of dollars. 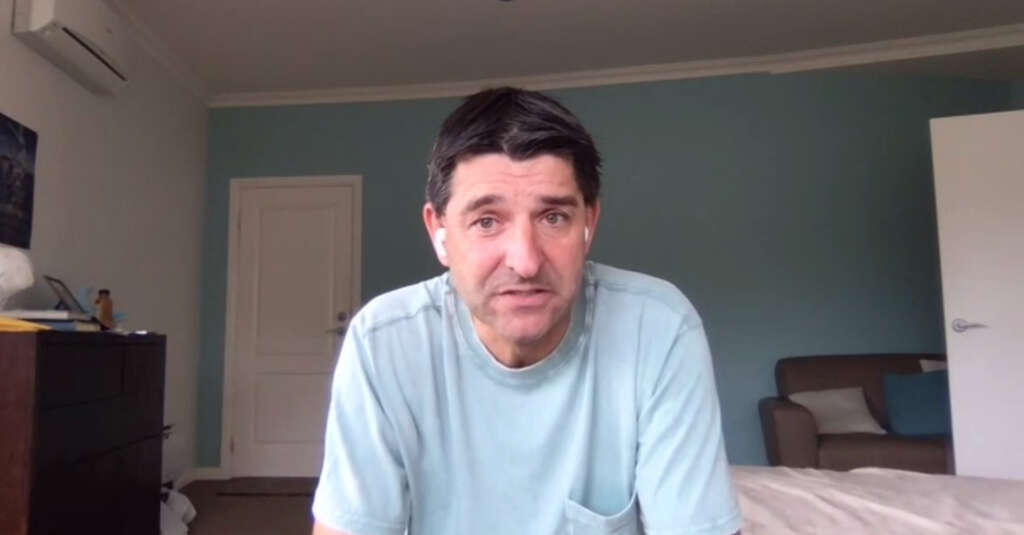 Of course, being in regional Victoria, Mallacoota went into COVID lockdown from August through to October, when restrictions finally eased.

But rather than seeing this as another blow to his already fragile town, Jeffery just can’t look past the positives.

“We’ve had amazing support,” he says, “from the army and the navy. We had Tennis Australia here just recently, with John Fitzgerald and the media crew who stayed here with us. They raised $6 million for the bushfire recovery in Victoria and New South Wales. They gave a cheque to the local sports and youth community club. I also got to play tennis against Fitzy, so that was fun.”

At the moment a team of electricians and other workers are staying at Jeffery’s place while they help rebuild homes in the town.

“I think some people will get into their new homes by Christmas, while others will take a bit longer,” Jeffery explains.

“[The town] is coming back, it really is. I’m quite excited about what I see. You could speak to some people and they might be really down. I haven’t lost a home, I haven’t lost everything, so I don’t want to discredit the real suffering that some people will still be going through. So I’m not downplaying that, but we’ve had amazing support from Australia.”

Of course for Jeffery, his main source of support this year has been from the Lord.

“I think in suffering, there’s nowhere else to go but to the living word of God. That for me was the audio Bible, which is like my best friend.”

“I feel like I’ve been given another life … We so easily could have lost our lives on New Year’s Eve last year.”

As the one-year anniversary of the New Year’s Eve bushfire approaches, Jeffery ponders on the emotions this might trigger for other locals and for himself.

“I guess a lot of people will probably reflect on that experience. I’m not sure how they’ll feel – there might be fear there …

“It reminds me again how fragile this planet is – that at any time, it could be a plane, a car, volcano, tsunami, bushfire, earthquake, you name it, this is a volatile planet and it can be quite dangerous. Most of the time we’re not aware of that.

“So for me, it’s about being ready for eternity. It’s about making sure that my heart’s right before God, making sure that I’m not twisting the Bible to suit my sins or my flesh. I want to be ready – and I’m at peace.”

Here, as our conversation draws to a close, Jeffery clarifies the final message he wants to leave readers, drawn from the depths of a life-changing year.

“On New Year’s Eve 2019, I got to witness what God can do when we cry out to him and how merciful he is to people – to people who don’t know him and people that do know him …

“The sky proclaims the glory of God,” says the Psalmist. While we might think of…

A prayer for peace

Crazy winds and balls of flames as families escape bushfire

Crazy winds and balls of flames as families escape bushfire

“Pointing people to God” as people leave their homes