For the past ten years, Perth Prayer has seen God's big plan unfold through their prayers.
reenablack/ pixabay
Australia prayer

The faithful few bringing revival to this city

It’s 6.30am on a Tuesday. A small but faithful group of saints have gathered at Wesley Uniting Church in the heart of Perth’s CBD to pray. A man who was sleeping on the street wanders in, and is prayed for. This is a common occurrence in the life of the Perth Prayer group, which celebrates its tenth birthday on June 19.

“Because Wesley church is so central, many times we’ve had people come in off the street. And sometimes they’ve made a commitment to Christ,” explains John Yates, one of the governing members of Perth Prayer, who is a retired Anglican minister and former theology lecturer at Perth’s Tabor College.

He gives another example of a drunk young man who found himself in the group’s second weekly meeting on Wednesday lunchtime, after being pursued into the church by police for disturbing the peace. “Now he’s got his act together. He’s off alcohol and he’s part of a Bible study I run,” says Yates.

“It’s part of the glory of that group really. The Lord brings these people in with all sort of stories, from all sorts of backgrounds. It’s quite remarkable.”

“I imagined Christians working in the city coming together … that, in unity, our prayers would heal people and heal this city.” – David Sibley

Perth Prayer now consists of about 40 members, with an average weekly attendance of 20. The group was established in 2009 as a weekly prayer meeting by a small group of business people, pastors and local church leaders. It was the vision of David Sibley, a scientist working for Chevron energy company, who modelled the group’s meetings on those used by Jeremiah Lanphier, which sparked the New York revival of the 1850s that brought one million people to faith in Christ.

“I imagined Christians working in the city coming together during lunch to worship, share testimonies and pray, and that the denominational walls that divided us would come down, that, in unity, our prayers would heal people and heal this city,” wrote Sibley in a testimony about Perth Prayer provided to Eternity.

While Sibley left several years ago to work in Houston, Texas (where he has since founded another city prayer group), his vision for the group as an agent of unity continues to flourish.

“Because it’s an open thing, we’ve had people [ranging] from Margaret Court, who’s a classical old-fashioned evangelical … through to my friend who’s a Coptic Orthodox priest, but we can all meet together, as we have done, in the name of Jesus,” says Yates.

He outlines the impact of Perth Prayer over the years, with people being saved, healed, “finding a peace with God and finding encouragement from being with other Christians.” The group’s impact has also spread geographically, with two more prayer groups started at Trinity Uniting Church, just 300 metres down the road, and Ross Memorial Uniting Church in West Perth.

“There’s no pressure to become members, no pressure for money … We’re not after anything. We’re just inviting people to share an hour with Jesus.” – John Yates

Yates believes the appeal of the prayer group stems from the fact that “it’s not like a church”. He explains: “There’s no pressure to become members, no pressure for money … We’re not after anything. We’re just inviting people to share an hour with Jesus. Not unusually, there’ll be people who’ll stay behind to keep praying and sometimes that’s gone on for a long time …

“I think people find a kingdom presence in these meetings … When people from all over the place, different races or ethnic backgrounds or different denominations, when they get together and they’re oblivious to all that … they do discover that ‘pearl of great price’ or that ‘treasure in the field’.” 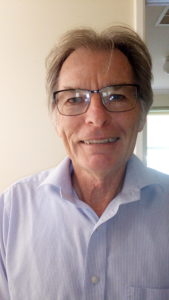 He believes this ideal is already under way. “There’s a lot of interaction between church leaders across the city. Many of them are people who have come and shared in Perth Prayer, so there’s like a DNA there and good relationships.”

For Yates, this unity and even Perth Prayer itself is part of the unfolding “tapestry” of God’s sovereign purpose for this city, which he is bringing about through the prayers of his people. He notes the role other corporate prayer events have played in this plan, including a week-long prayer meeting he took part in over two consecutive years (1994 and 1995), where a  small group of Perth faithfuls prayed 12 hours each day for “the kingdom of God to come into our city and our nation.” He also points to the Commonwealth Prayer Initiative, held in conjunction with the 2011 Commonwealth Heads of Government Meeting (CHOGM) in Perth, this year’s Franklin Graham event and Movement Day in May.

“There’s lots of prayer beginning to happen more and more across the spheres of culture – for example, in allied health or for teachers. We’d like to see that get a bit more focused, a bit more intentional and ordered … We need a lot more integration in terms of the different streams or works God’s already raised up being integrated across the city,” Yates explains.

“There’s a crisis of discipleship across the whole church in this country. People don’t read their Bibles … People want God on their own terms, unfortunately.” – John Yates

Some of Perth Prayer’s initial aims are also still to be realised, “like all the churches filled with people praying”, as well as Yates’s conviction to pray for renewed passion among the saints.

Yates is also keen to see the bridge between “the affluent and the impoverished” continue to be broken down across the city. For the church, this means reaching out to those affected by the “glaring issues” of homelessness, mental illness and the epidemic of ice use.

And so, Perth Prayer will continue to pray, in Yates’s words, for “a sovereign move of God to renew the people of God, empower them for evangelism to see lost people come in, their lives be healed and transformed.”

While this plan sounds monumental, Yates is quick to add this simply means the group will carry on seeking God’s will through prayer. “We’re waiting upon the Lord each step of the way.”