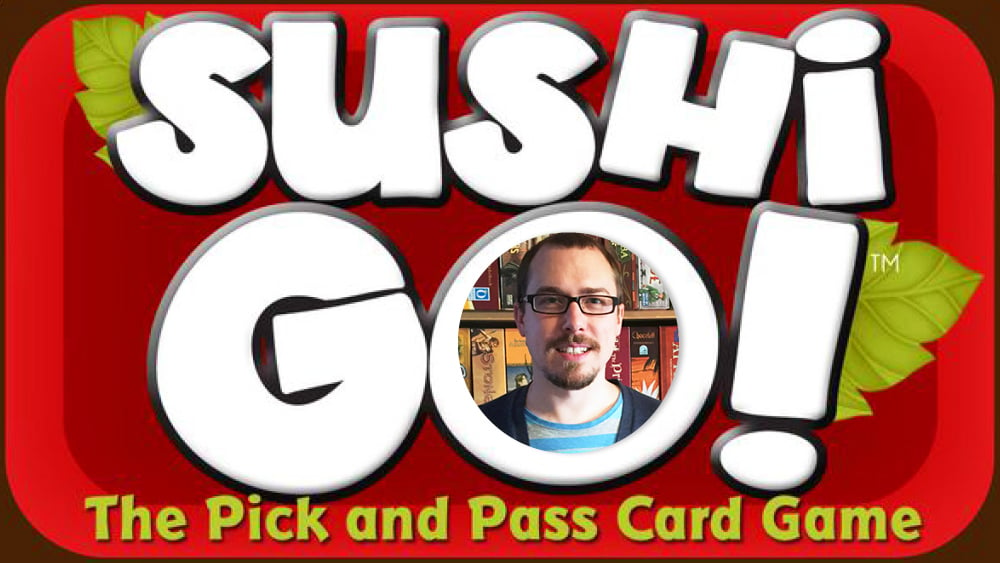 Picture this: you’re two hours into a game of Monopoly, and everyone is getting bored. The person next to you says, “Let’s just forget about that rule and move wherever we want.” Everyone thinks that’ll be a great idea. It’ll make it more fun.

“But it always descends into chaos. Has anyone ever actually finished a game of Monopoly like that?” asks Phil Walker-Harding.

Phil is a self-confessed board game rule fanatic.

Phil’s penchant for rules may have something to do with the fact that he is a board game designer.

His most successful game is the fast-paced card game Sushi Go!, which has been an international hit. In Sushi Go!, you are eating at a sushi restaurant and trying to grab the best combination of sushi dishes, scoring points for collecting the most sushi rolls or making a full set of sashimi. Phil has created other games that have also been picked up by major board game producers, including Bärenpark, where players build their own bear park.

“Someone asked me if I could create a Christian version of Sushi Go! But I wasn’t aware that eating sushi was not Christian.” – Phil Walker-Harding

Phil is a part-time game designer and spends his other days working in ministry in Newtown, in the inner west of Sydney. He says his weeks are an “excellent balance” of ministry and creativity, work and passion.”

But that doesn’t means Phil will be designing a Christian board game anytime soon.

“It’s something Christians ask all the time,” Phil sighs. “And I think what they’re really saying is, ‘Wouldn’t it be great if you could use your faith and creativity at the same time!’ To which I go, ‘I feel like I am already…’

“Aren’t we all supposed to be doing that? Our faith and Jesus’ example should shape our whole lives, whether you’re a painter, or a game designer, or a business person. “You can’t think of art as a tool. How can I paint a painting, force this concept into a painting or a song or a game? That’s generally not how you come up with good art. It comes out of who you are. I think this idea that all aspects of our lives should be touched by our faith … the idea that unless we are singing about a Bible story or playing a game about a Bible story that somehow we’re not engaged with God – I think that misses what it means to be a human.”

He questions the need for Christian versions of secular games such as Settlers of Catan (called Settlers of Canaan,) or Monopoly (that would be Bibleopoly, where the “Go” tile is replaced by “In The Beginning,” among other things).

“Someone asked me if I could create a Christian version of Sushi Go! But I wasn’t aware that eating sushi was not Christian.”

“Games allow groups of people to engage with each other and get to know each other, and have a shared experience – people from all ages and backgrounds. I think that’s better than games with a ‘Christian theme.’

“Just by playing, we’re enacting something like Christian community – at church, that’s what we’re always trying to do, to build a community where everyone is welcome, where there is openness towards each other. I think games can really facilitate that. That’s what they do! It’s why I love them. I don’t see the need to somehow ‘Christianise’ their content.”

Phil has always loved board games. He spent his youth making “silly games with paper and Textas” and has always loved playing games with friends and family. But it wasn’t until he was introduced to modern European game design, as in games such as Carcasonne, Lost Cities and Settlers of Catan, that he decided he wanted to make games, not just play them.

“I discovered a whole new design school [of games] where my decisions actually mattered, where I could strategise and there’s great interaction between players. When I was introduced to those types of games, I really wanted to make something like that, too.”

“I’m always surprised if people know who I am. I’m usually just at home, sitting in my room, designing games.” – Phil Walker-Harding

Phil is in Germany this month at Spiel Essen, the largest trade fair for board games in the world. He’s launching three games this year – that’s considered a big year for a board game designer. Gizmos is all about building machines at a science fair. Gingerbread House has players using dominoes to build a gingerbread house and attract fairytale characters to their doom. And then there’s a spinoff of his popular game Imhotep, which is a two-player, duel game.

At Spiel Essen, Phil will meet players of his games and demo his new creations. He’s always surprised when people know who he is.

“The [board game design] industry is quite small in Australia – most of the big publishers are in Europe or North America,” says Phil. “So in some ways I’m quite isolated, and I’m still learning about people’s perceptions of me as a designer. I’m always surprised if people know who I am. I’m usually just at home, sitting in my room, designing games.” Phil describes his game designs as “quite abstract,” meaning multiple themes could often fit with the game mechanisms he chooses. For example, in Sushi Go!, the central mechanism is passing cards around the table.

“I was looking for a theme that would work well around that mechanism. My wife and I were eating a lot of sushi and I thought: a sushi train could work well!”

He follows trends in game design and there are a few that have piqued his interest. “Legacy games,” for example, where you play a game in multiple stages, reflect a global fascination with binge-watching television.

Phil says heavy narrative games are part of this trend, and he believes the human obsession with narrative stems from the “story that’s embedded deep in us – there’s a story to the world we’re living in, how God has acted in it and shown himself in it. That’s why we love stories so much, and look for narratives in everything we do, including the games we play.”

Phil agrees that Christians generally tend to enjoy board games, and suggests it is because of the social aspect.

“You’re interacting with people you might not normally interact with, and around a dining table you find yourself going on an adventure together or solving a puzzle. Games can facilitate relationships quite quickly. That’s really important to me in my own game designs.”

We asked Phil to recommend some other games (apart from Sushi Go!, of course!) he loves which bring a group of people together.

One Night Ultimate Werewolf: “You’re given a secret role, and you have to figure out who at the table is the werewolf, just by discussion. I’ve had so many great interactions with people through that, and really gotten to know them.”

Kingdomino: “This is a really great, introductory light strategy game. You’re building a kingdom out of domino tiles. It’s really bright, beautiful artwork, and it works for a range of ages and backgrounds.”

Race for the Galaxy: “This is one of my personal favourites, but it’s much more complex. It’s a case study for me of how much complexity you can get out of a single deck of cards. The whole game is cards, and all the cards have multiple uses. It’s an amazing game design lesson. I’ve been playing it for ten years and I’m still excited by it.”

I was recently in Auckland, New Zealand, looking for a bite to eat. I stumbled…