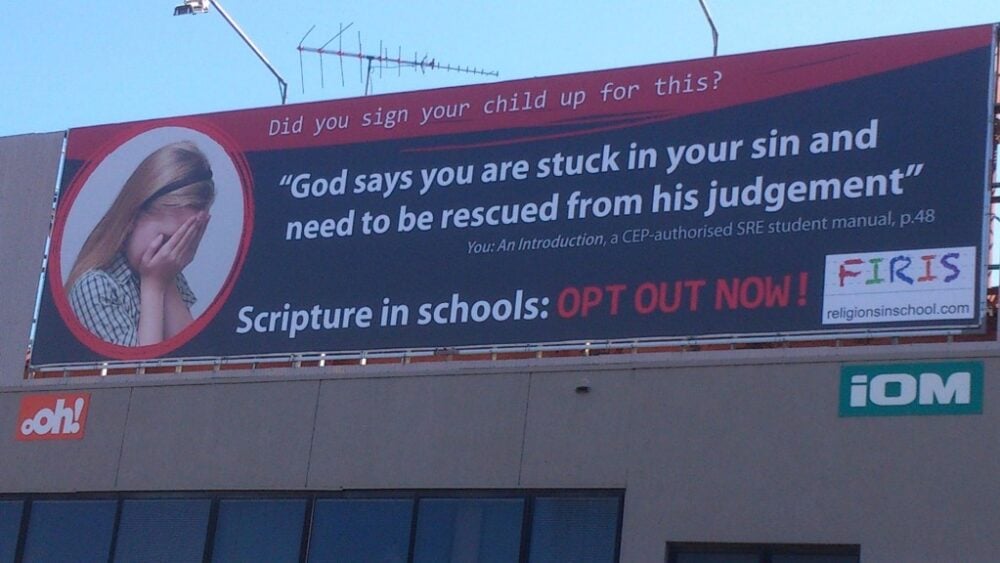 A billboard in Victoria purchased by anti-religion in schools campaigners.
David Clarke

Why Christians don't need to hate the new anti-scripture billboard

A billboard purchased by an anti-religion in schools group has been unveiled in south west Sydney today. Some Christian leaders think that it’s an opportunity to talk more about the gospel.

“God says you are stuck in your sin and need to be rescued from his judgement,” the ad from FIRIS group (which stands for Fairness in Religion in Schools) reads.

“Love it!” said Anglican minister John Dickson and founder of Centre for Public Christianity on social media. “Imagine all the people driving past this, giving it a glance. I predict some passersby will dismiss it as Christian advertising preaching the gospel at them, some may end up pondering their own sin and need of rescue (and may even think the little girl is praying for forgiveness!), and some will study it closely enough to realise this is meant to be a critique of Scripture in schools.

Dickson, who contributed a token amount to the FIRIS fundraising campaign for the billboard, in what he says was an expression of “grace and friendship” while making clear to them that “their endgame of getting rid of SRE is misguided”, was clearly excited by where the money had gone.

The billboard purchased by anti-religion in schools group FIRIS

The billboard quotes an Anglican Special Religious Education study manual that complements the Christian book You: An Introduction written by Anglican minister and Eternity contributor Michael Jensen. The book was one of three subject to a temporary ban by the New South Wales Department of Education earlier this year after complaints were made about its content. The Department subsequently overturned the ban.

Michael Jensen told Eternity he was surprised at the contents of the billboard.

“I expected it to be about sex or another, more hot-button issue,” he said. “But actually the verses from Genesis 50:20 came to mind: ‘You intended to harm me, but God intended it for good to accomplish what is now being done, the saving of many lives’.”

Rev. Jensen said that his book and the accompanying student manual (not written by Jensen) are for high school students, not young children as depicted in the billboard, and the quote has been pulled from its context that emphasises God’s unfailing love and goodness.

“I think it’s a message that is hard for Christians to get out, and FIRIS has helped us do it.”

“It’s all about age-appropriateness,” Jensen said. “We want to teach kids from early on that there are things that human beings do that make God sad. I think we can do that. It’s important to emphasise God’s goodness and that God loves us. And it’s important that we start with the good news of Jesus. That’s the context. But to say that we don’t do the wrong thing, or that God doesn’t care what we do, is anti-human. It’s the foundation of ethical behaviour – that God tells us what is right and wrong.

Jensen says even though they’re only half of the story, God’s judgment and human sin are important elements of the Christian message that we all need to hear.

“I think FIRIS intend to do a mischief to scripture in schools, but I think what they’ve said is what Christianity teaches. And I think it’s a message that is hard for Christians to get out, and FIRIS has helped us do it.”

This is the third billboard the FIRIS group has bought in opposition to religion in public schools. The first two were in 2012 and 2014, in Victoria, where the group began its campaign against Special Religious Instruction (SRI) in Victoria. The 2012 billboard said, “State schools are not church playgrounds. Special Religious Instruction divides our children.” In 2014, it was a billboard with a picture of Jesus petting a dinosaur, with the words “Heaven only knows what they are telling your child.”

Correction: A previous version of this story did not identify that the quotes from John Dickson were from social media. We have also clarified Dickson’s reasoning on him giving a “token amount” to the FIRIS billboard funding campaign, at his request.