Over the past 27 years, thousands of people have experienced Christ's birth through Lobethal Living Nativity.
Good News Christmas

It takes a whole town to put on this nativity play

The small town of Lobethal in the Adelaide Hills has become synonymous with Christmas. But there is another, more important, Christmas tradition for which Lobethal has earnt its fame: the Living Nativity play.

“… the idea [was] to show the people … the real meaning of Christmas.” Janet Le Page

In this town of around 2,500 – founded by German Lutherans – the story of Jesus’ birth is being kept alive by hundreds of people from local churches and the community who put on the play each year. The play is now so well-known that it’s not only a key tourist attraction, but has also gained mainstream media attention, with the ABC’s Compass program devoting an episode to the making of last year’s nativity play.

Janet Le Page has been part of the Lobethal Living Nativity since its conception 27 years ago and is now vice-chair of the play’s committee. She tells how the idea was originally developed by Lobethal Lutheran Church, when Tom Pietsch was pastor. “We had just built a big new church with an amphitheatre out the front. It was Flo, the pastor’s wife, who came up with the idea of having a nativity to show the people who came to see the lights in Lobethal what the real meaning of Christmas was.”

Le Page continues: “For the first performance, all the characters and the stable faced out towards the main street. It was a disaster as far as traffic goes! The traffic just stopped. After that, we turned it around and it now faces away from the street.”

Today, the play is a combined effort by several local Lutheran churches (including almost 60 members of Lobethal Lutheran this year), along with Seventh Day Adventist, Baptist and Anglican churches, other Christian groups and non-churchgoers from the local community. “We’ll be tired by the end, but it’s a good tired,” enthuses Le Page.

“Last year … I spoke to people from over 40 different countries.” – Janet Le Page

She expects around 12,000 people will see the play this year, with audiences of about 800 each night. Significantly, these audiences come from far and wide – with some Christmas-light enthusiasts just stumbling across the play on the main street, while others make a special trip to see the play itself. “Last year, when I was ushering, I spoke to people from over 40 different countries in the audience,” says Le Page.

The play follows the biblical accounts of Jesus’ birth in the gospels of Luke and Matthew, and the narration is interspersed with Christian carols. Each evening the Living Nativity cast varies somewhat, with a different family playing the roles of Mary, Joseph and baby Jesus, along with a mix up of angels, shepherds, wise men and other characters. Alongside these characters is a choir (ranging from two to 20 members), and a sound, lighting and set-up crew. All up, Le Page estimates up to 50 people are needed for each night. To clothe this host of characters, the Living Nativity committee has a store of over 60 costumes, complete with 100 pairs of sandals.

Le Page has the job of assigning each position in the play over the whole two weeks.

“I’ve been [the angel] Gabriel every year for one or more nights. But, because I do the rosters, if there’s a spare position and I’m free that night, then I’ll fill it – except I’ve never been a wise man or Joseph,” she explains.

“They say never work with children and animals, but we’re doing both!” – Janet Le Page

Alongside humans, there is (of course) a menagerie of animals. These include two hired camels (sometimes substituted with alpacas or people in dress-up) and a couple of donkeys, as well as sheep, goats and a young calf on loan from local owners. There are also two trained doves, which sit in the stable eaves.

“They say never work with children and animals, but we’re doing both,” jokes Le Page.

As a result, there have been many funny moments over the years, with stubborn alpacas being dragged across the stage, little angels somersaulting to impress the crowd and many antics involving a live baby Jesus. 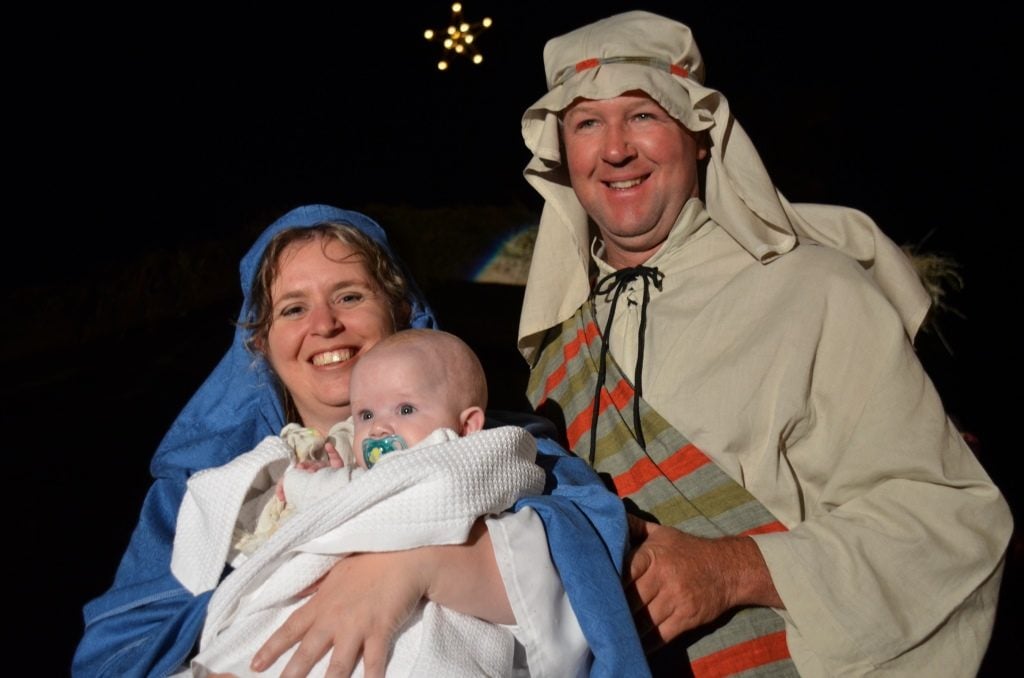 Alongside the fun, there is also a staggering amount of work involved to put on a nativity play of this size. The committee begins preparations early in the year, holding review meetings and organising fundraisers with baking and craft donations. Recruitment for roles begins in September, when 200 registration forms are distributed through local churches. Before the play season begins, a team of locals builds the set and erects enclosures for the animals, and another team washes, repairs and irons all the costumes.

“[For] some people, that’s their [only] Christian message for the year.” – Janet Le Page

But Le Page is convinced that all the hard work is worth it. “It’s a chance to remind people of what Christmas really is about, particularly those who are not associated with any church. Some people come back every year and that’s their [only] Christian message for the year.”

She adds, “Those in the community who are Christians appreciate the fact that we are witnessing in a world where that’s no longer so common or popular.”

The committee has received feedback from audience members that the play has served to strengthen their faith, and someone even suggested they thought Lobethal Living Nativity was better than the famous Passion Play in Oberammergau, Germany.

Amongst locals and beyond, the nativity play has become recognised as just as much a part of Lobethal’s Christmas tradition as the light display.

“A lot of the town is involved with the light display, but now the nativity is a very important part of that. On the final night [December 23], there is a pageant down the main street and the nativity float is always at the beginning of that pageant,” Le Page explains.

While Le Page is pleased that recognition is growing for Lobethal Living Nativity, she certainly doesn’t depend on accolades to continue this labour of love.

“For those of us involved [in the play], it just wouldn’t feel like Christmas if we weren’t.”