Coming together to support local leaders in remote areas

A small organisation in the middle of Australia is embarking on a huge project – to bring theological education to indigenous Christians living in remote communities.

The programme has been launched in Alice Springs, but it is hoped that the courses can be offered in remote communities in the future.

ITECA is an ecumenical group made up of the Catholic Church, Uniting Church, the United Aboriginal and Islander Christian Congress (UAICC), Lutheran Church, Anglican Church and the Australian Society for Indigenous Languages (AuSIL).

“It’s for people who have expressed a desire to be involved in ministry, articulated some sort of sense of call.” – Wayne Munster

“ITECA has engaged me to develop a Certificate III programme,” says Wayne Munster, who works for UAICC in Alice Springs. “The Certificate III is aimed at developing a pathway for indigenous leaders into ministry, to come out the other end of that as leaders in their respective congregations.”

As a general rule, students who participate in these courses are not ministers or pastors in their local churches, but they are active Christians already engaged in their local congregations.

“It’s not just an open invitation, it’s for people who have expressed a desire to be involved in ministry, articulated some sort of sense of call,” says Munster. “This course is about taking the next step to not just give Bible and ministry training but to equip indigenous Christians for leadership in their congregations.”

The group was formed about three years ago when founder Peter Greenwood had a vision to establish a satellite campus of Nungalinya College (a theological training college in Darwin) in Alice Springs. 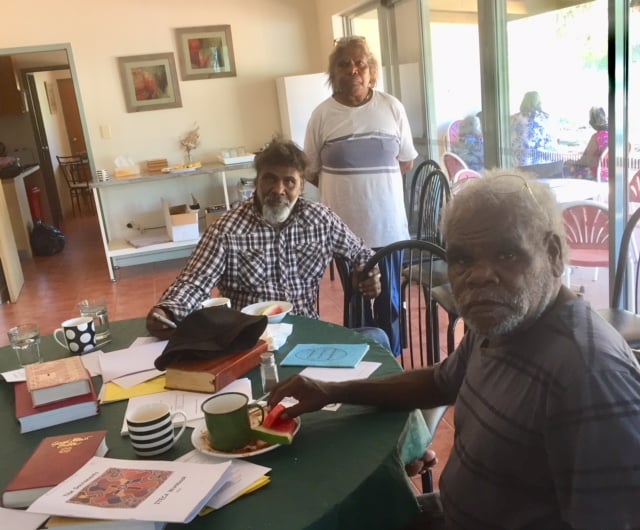 Munster says that over the past few years it’s become obvious that a satellite campus of Nungalinya wouldn’t work for a number of reasons.

“The Nungalinya curriculum is quite Top End-centric. That’s fine – it’s where it’s situated and has historically drawn a lot of its students from up there – but, together with them, we discovered we needed something contextualised to here, to conditions and ministry contexts in the desert,” says Munster.

“This course is about taking the next step … to equip indigenous Christians for leadership in their congregations.” – Wayne Munster

Nearly 1500km separate Alice Springs and Darwin, and there are lots of differences between the indigenous people in both locations.

“There’s different cultural processes, a different history of encounter with non-indigenous Australians. There is a whole different history to deliver training in. It’s not a shared history, not exactly the same story,” says Munster.

“As a generalisation, there’s very different learning styles from the Top End to the Centre. ‘Saltwater people’ (from the Top End) are much more outgoing and engaged in different ways than Central Australian indigenous people. I don’t really know the reasons for that, but it’s a well recognised thing about cultural difference.

“And there are different cultural understandings about the gospel – different stories through which the gospel has been conveyed and understood – and we’re trying to take those differences into account when we’re delivering theological education.” Students at the ITECA sacraments course in Alice Springs in February, with a Catholic Priest Wayne Munster

Currently ITECA is offering two subjects. One is called Our Culture, God’s Story in which indigenous people think about the connections between their culture and Christianity. The second is on the sacraments.

The sacraments subject was run in Alice Springs in February this year, and there were eight students who came from the Catholic church and NRCC (Northern Region of the Christian Congress). Pitjantjatjara and Arrente language groups were represented. The course ran for five days and was facilitated by Helen Richmond, a former lecturer at Nungalinya College and now Minister at Casuarina Uniting Church in Darwin.

Student Grant Burton (Mitika Burton), from Mimili, said of the course, “I didn’t know there was so much to these Christian sacraments!” A second student, Meredith Treacle (a Pitjantjatjara woman from Fregon) said, “I understand baptism more now from this course.” Robert Hoosan (a Pitjantjatjara man from Finke) said, “it’s good that we can go into the Bible to learn these things.”

“One of the really good things … is this freedom … to appreciate the richness in the diverse views on things.” – Wayne Munster.

When asked how the ecumenical group resolves differences of belief, Munster says, “we agree to disagree on the things that aren’t essential.”

For example, the Catholic Church teaches that marriage is a sacrament, while most Protestant churches have a different understanding. A Catholic priest taught part of the subject on sacraments, with a section of the workbook devoted to what Catholics teach, so that all the non-Catholic participants heard Catholic teaching on that subject. Similarly, the Protestant view was also be put forward.

“I think that’s really important because they [students] are able to become more established in what their denomination follows and practises but they also get to hear other rich aspects that they might not believe, they might choose not to believe, but may enrich their own understanding of it as well.

“There’s a lot of mutual respect. We haven’t found it hard to sit around the table and work together.” – Wayne Munster

“I think one of the really good things about ITECA is this freedom – not to avoid controversial differences but to try and appreciate the richness in the diverse views on things,” says Munster.

“The thing that unites us is the sacrifice of Jesus Christ, and ministry and care of people – that’s something that is common across the denominations. There’s a lot of mutual respect. We haven’t found it hard to sit around the table and work together.

“We are trying to embrace our differences with respect and be OK the end of the day saying, ‘we don’t believe that but we respect your right to believe it’. And the things that unite us are far stronger and more well established than these differences we have.”

Pray that this ecumenical movement to support theological education for indigenous people in Central Australia will glorify God and bring the good news of Jesus to more and more people.

More than three quarters of this Indigenous town went to church