This Christmas, thousands of “invisible” workers will spend the day miles away from their family – and perhaps even from the nearest land. These often forgotten workers are seafarers, who spend an average of eight to 11 months at sea as they ship cargo around the globe.

In their remote, watery world, many seafarers not only spend the entire Christmas season away from those they love, but they often miss the most significant moments in family life.

“Separation from family is the number one problem.” – Garry South

“You can just imagine telling your wife and your children ‘I’ll see you next year.’ That’s a really hard thing for some of them, especially if their wife is expecting. They miss the birth. They’re on board for another four or five months and they see pictures of their new baby, but they can’t hold them,” chaplain Garry South explains to Eternity.

South is one of the few people who has regular contact with up to 38,000 seafarers each year as they pass through Port Hedland Seafarers Centre, on the north coast of Western Australia. These workers power the ships that visit the port to export the Pilbara region’s lithium and iron ore resources to China and beyond. Port Hedland is the world’s largest mineral export port, and also Australia’s biggest port based on total annual tonnes shipped from it.

“Separation from family is the number one problem ­– if their children are sick or things happen at home, they can’t go home. And then if a seafarer is injured or sick on board, they don’t always get help because they’re too far out to sea. You sometimes have deaths on board.”

South gives another example of a young Japanese cook who discovered his sister was gravely ill just one month after his contract started. Within two months, his sister passed away “but he said he couldn’t go home because ‘I have a wife and a three-year-old daughter, and if I go home I lose my contract.’”

“So, basically, he had to stay on board.”

While employment conditions are not as bad as they used to be, according to South, the chaplain says “there’s still a lot of improvement to be made”. In particular, he singles out support for the mental health of seafarers.

“I go to the hospital and visit those that have been injured or sick and it’s just really sad. They’re worried about how they’re going to survive because they’re worried their contract will be cancelled … For the seafarers, having someone to show them a little bit of interest and try and help them, it lifts them up.”

“It’s about trying to identify with what’s going on in their world … When we finish work we can go for a walk or go to the supermarket; when they finish work they can only go to their cabin.” – Garry South

On an average day, South hops into a launch boat and visits at least two ships anchored in the port, staying on each vessel for a couple of hours to chat to the crew. He also takes the opportunity to hand out Bibles, which are funded by Gideons and Bible Society Australia.

“I’m finding a lot more Myanmar crew coming to Port Hedland now … A lot of them are Buddhist and I’m giving out lots of children’s Bibles. The Filipinos and Myanmar crew are quite happy to receive a children’s Bible. When they get home, they’ll send me a picture of them with their children and wife.”

South continues: “Recently I was on board a vessel and I spoke to a Myanmar captain. I think he was trying to convert me to Buddhism. It was an interesting conversation because in Buddhism, there is no forgiveness. So I was able to tell him that my God’s into forgiving.” South’s conviction about the ability of chaplains to change lives comes from a place of personal experience. As a young man he was converted by a chaplain during a 15-minute conversation in a hospital, after a motorbike accident.

“God really got my attention then ­– it was a turning point,” says South, who afterwards began attending an Anglican church in his home town of Forbes in central-west NSW.

He later entered into church ministry in Narooma on the south coast of NSW, then worked in chaplaincy for a juvenile justice centre in Wagga Wagga in the NSW Riverina and in a drug rehabilitation centre near Coffs Harbour in northern NSW. Then he received a phone call inviting him to take up the chaplaincy position at Port Hedland.

This year, South and his wife Kathy have also taken over management of the local visitors centre to help fund the chaplaincy work. The importance of the couple’s contribution hasn’t gone unnoticed, with South winning the 2019 International Seafarers Personality of the Year award.

For South, it is a labour of love. With most of his three daughters and grandchildren living far away, he says, “we understand seafarers a little bit because we only get to go back once a year to visit [our family]. It’s about trying to identify with what’s going on in their world. What I try and do is to take my shoes off and put theirs on. When we finish work we can go for a walk or go to the supermarket; when they finish work they can only go to their cabin.”

And so, South is quite prepared – year after year – to spend his Christmas serving seafarers.

Since November 30, staff at Port Hedland Seafarers Centre, along with community volunteers, have been packing 2000 Christmas gift bags to give to seafarers. The bags, largely funded by mining companies, each contain souvenirs from the centre (such as a cap and drink bottle), as well as practical items (like toothpaste and a toothbrush) and Christian literature. This year they will also contain beanies hand-knitted by nursing home residents and provided through a local Rotary club. 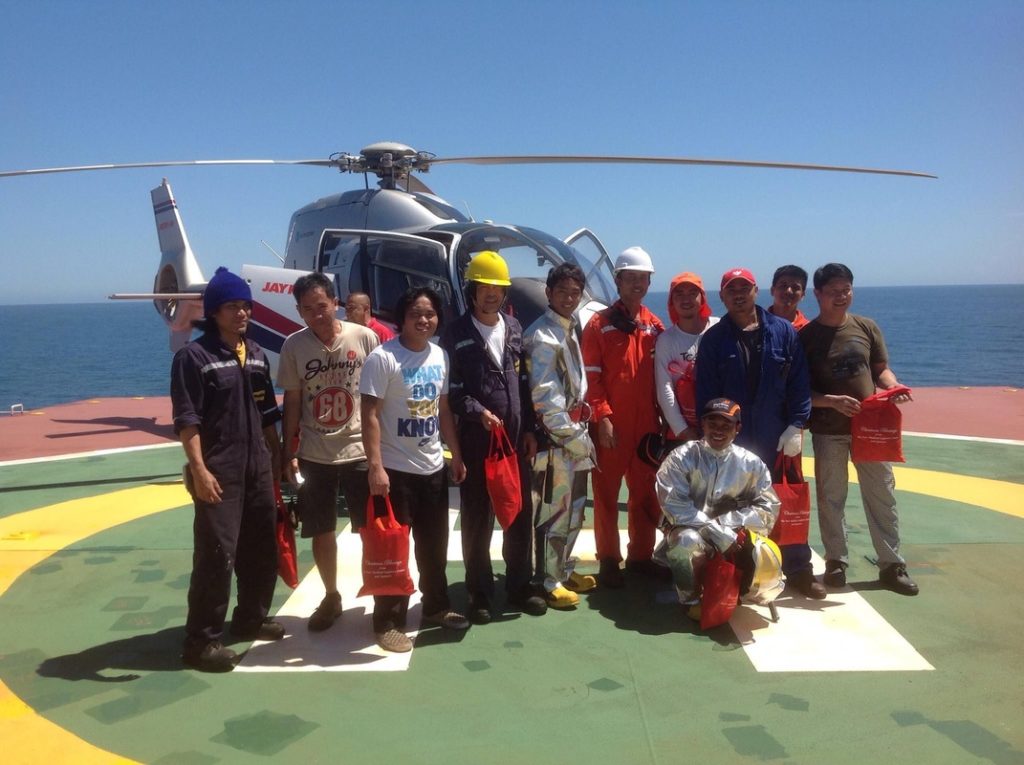 “We start giving the Christmas bags out to each individual seafarer around December 21 for vessels leaving our port then,” South explains. “Then on Christmas Eve day, I usually fly out to an anchorage which is 16 miles out. So we land the helicopter on a ship there and the crew come and meet us on the helipad, and we give them the bags and then we fly over to the next vessel. Last year I went to about 36 vessels out there.”

While Garry admits this outreach is “full-on” and “exhausting”, he adds, “I have the seafarers thanking me for the presents for the whole of the next year.”

But for Garry, the biggest payoff is “just seeing the seafarers actually getting looked after”.

To find out more or support the Mission to Seafarers visit mts.org.au. To visit the Port Hedland Seafarers Centre directly head to phseafarers.org.

The intense but scattered conversations of a typical day of chaplaincy