Students deliver Christmas hampers made with 'love, sweat and tears'

“These hampers were definitely made with a lot of blood, sweat and tears!” says high school student Alexandra.

“But not literally, right? Nobody actually ended up bleeding, did they?” I check and she laughs.

No, there was no bleeding involved – or crying, for that matter. But there was plenty of sweat and effort. More importantly, Alexandra says, they were made with a lot of love. 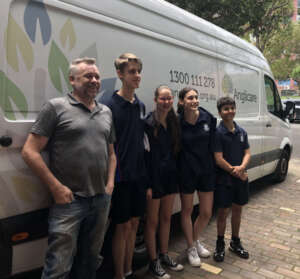 Together with her school mates, Oscar, Saffron, and Andronik, we decide that “love, sweat and tears” might be a better summary of the week’s events.

The job has required a stretch of the year 10 students’ leadership and organisational skills – and they’ve embraced it for the sake of a bigger cause.

“We like organising things and logistics so we thought we should use our skills to do something good,” Oscar explains.

“I thought it would be a good opportunity to serve and it sounded really interesting. And I wanted to help people out at Christmas who were less fortunate,” says Saffron.

Andronik says he became involved because he wanted “to actually do something for once.”

“Normally I just sit back and watch other people do that, but I figured this time I’d actually get involved,” he explains. So was it tough? He says yes, but not every aspect. Physically it was taxing to put together and load the hampers into the Anglicare van, but brainstorming the logistics was a lot of fun.

“I hope it just makes their Christmas.”

The group had just a week and a half to raise ten thousand dollars and order the products required. And when they experienced the odd “delivery mishaps” or shortage of items that were being donated, they co-ordinated emergency runs to the supermarket to get the supplies they needed. They also packed everything under extra “COVID safe” conditions, sanitising their hands and table surfaces before they touched anything, into the bags provided by Anglicare.

Their youthful hopes for the hampers are refreshing – “I hope it just makes their Christmas,” “I hope it’s something that helps families end the year on a positive note,” “I hope it is a boost for them, emotionally, after such a tough year,” etc. 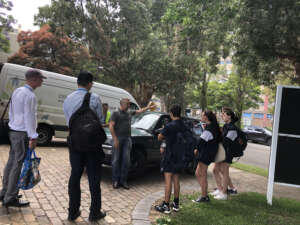 At South Sydney Anglican Church, where the Anglicare van has just delivered the hampers, Pastor Matt Johnson has a frank chat with Alexandra, Oscar, Saffron, and Andronik about the people who will receive the ‘Toys n Tucker‘ Anglicare hampers they have prepared at Christmastime.

He gestures to Redfern’s public housing towers just across the road from his church where the vast majority of the hampers’ recipients live. Johnson believes the church’s values of faith, hope and love are the answer to problems such as unemployment, substance abuse and economic hardship which many of the tower’s inhabitants are battling.

“There’s not a lot of hope and they often don’t have a lot of people in their lives that love them properly,” he says honestly.

“My hope as a Christian pastor is that they come to faith in Jesus but even if they don’t, we will keep showing faith, hope and love to them.”

Earlier, Matt introduced me to Ross and Roy, who will be involved in distributing the hampers. Every year, they tell me, the hampers are piled high and wrapped as a giant present with a tinsel bow on the front steps of the church, before being unwrapped and distributed according to a list of previously registered recipients. 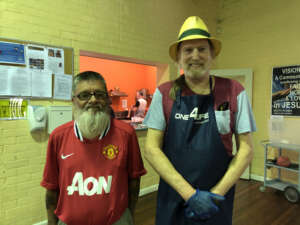 Ross and Roy recently have been outside the local grocery stores, handing out pamphlets which encourage others to donate items for ‘Toys n Tucker’ hampers that can be distributed alongside those donated by St Andrew’s.

Both men live in the towers and volunteer each week at the church when it receives and distributes donations of food made to OzHarvest, Australia’s leading “food rescue charity.”

OzHarvest collects quality surplus food and distribute it to people in need – which has the added bonus of diverting food waste from landfill.

But the first chapter of this story began with a single mum of two who attended the church.

Matt tells me about how she approached him and said she wanted to do something to meet the need she knew first hand from living in the towers.

He agreed to support her and wrote some letters verifying that the initiative was part of the church’s activities. Then, she went to local businesses and got them to agree to donate food.

“She got stacks of stuff – piles of pizzas from Domino’s and everything!” Matt recalls with a smile.

The food was originally distributed in the carpark of the housing towers. Weather was often an issue so they moved it across the road, into the church building.

After several years of the church carrying the program capably, OzHarvest approached them and asked if they would become OzHarvest distributors.

These days, every Friday afternoon, trucks deliver food to the church’s loading dock and a team of faithful volunteers – including the lovely Ross and Roy – pack it up into bags and distribute it to those who need it.

So who are these volunteers? Most live in the towers, and all attend the church or its programs, Matt says.

“I don’t do fly in, fly out workers,” he explains, using the term that describes workers who fly into a place for short periods of time and then fly out again because they don’t actually live there.

He has turned down offers from those outside the church community who have volunteered to help in the program.

It’s all a thoroughly local community affair – and Matt’s fiercely protective of it.

“I would know someone from every second door, at least, in those blocks,” he says, his love for them evident – and apparently mutual when you hear the way his team of volunteers talk about “Pastor Matt.” 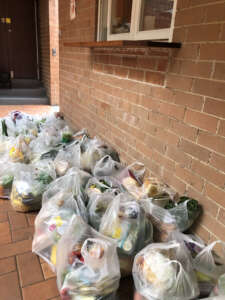 16 bags of food ready to be distributed.

But despite his resolve, there’s nothing easy about distributing food to a needy community – because you just never know what you’re going to get.

This week, they’re hoping another couple of trucks of donations turn up, because so far only one has – and that means only 16 bags of food are ready for recipients. Matt makes several phone calls, trying to learn whether more trucks are coming or whether the workers should head home.

Other days though, there’s an abundance – and, sometimes, of unexpected food items. Matt laughs, and shares stories of a huge donations of olives they received one week. Another time, he says, they were given 500 kilos of meat.

But Matt is a pastor who clearly is able to roll with the punches of unpredictability that are part of church life in Redfern. At one stage, our conversation breaks off while he helps a woman who is looking for a hose to water the garden. Then, as we walked away, he casually told me that the guy who usually looks after the church gardens is “inside” (i.e. in jail) at the moment.

“It’s OK,” Matt says, completely unfazed. “He’ll be out again. Most of these guys in our team have done time.”