The iconic face of Jay Laga’aia appears on screen a few minutes late for our scheduled Zoom interview. He’s been wrangling washing onto clothes airers on a particularly soggy Sydney morning.

While the screen is smaller than those on which audiences have been watching Laga’aia for almost 40 years, he still comes across larger than life.

“There’s always a note left on the bench saying, ‘Washing, vacuuming and find out what that smell is coming from one of your daughter’s bags,” Laga’aia explains, after apologising for his lateness.

The notes are courtesy of his wife Sandie (a high school teacher) who, Jay admits, is the household controller. This is no mean feat as the Laga’aias have eight children – yes, eight – ranging from 37 down to 10 years old (and they also now have three grandchildren).

Although he needs no introduction, Jay Laga’aia is best known for his role as Captain Gregar Typho in the Star Wars films (Episodes II and III), as well as being a presenter on Play School and appearing in Home and Away and Water Rats.

In more recent years, Laga’aia commanded his own kid’s show, Jay’s Jungle (which aired on Channel 7).

Other strings to his bow include playing Mufasa in the musical The Lion King, the Wizard of Oz in Wicked and Shrek in the 2018 Australian production of Shrek The Musical. In these roles, and in his kids’ shows, Laga’aia has also employed his impressive musical talents – especially singing and ukelele playing.

Now, at 57, this Samoan raised in New Zealand, now staunchly Aussie performer is still at it. The night before Eternity‘s interview, Laga’aia performed a livestreamed kids’ show – “Come Dance and Sing with Jay Laga’aia and Friends” – at Parramatta Riverside Theatre.

“It’s been a while since I’ve been up and active like that, and my body was very much telling me that this morning!” he quips from his home, where he’s spent a lot more time since COVID-19 hit.

“Doing early childhood educating or a children’s show, if you’re going to sing a three-minute song about jumping, then you have to jump for three minutes! So I’m the natural enemy to gravity at the moment.”

Laga’aia’s tone soon becomes serious when discussing the devastating impact of the coronavirus pandemic on the performing arts industry.

However, as an “eternal optimist”, he adds: “But you have to work with what’s in front of you. I personally think you just have to be thankful for the situation you are in because when you look over your shoulder at your neighbour or somebody else, there’s always somebody in a worse position than you. So you can either come to the same situation that you’re going to be in with a positive attitude or you can moan and groan about it, but we are still in the same boat.”

His concern about the future of the performing arts industry is largely for the sake of those coming after him (including several of his own children).

For over two years Laga’aia has been an ambassador and lecturer for Excelsia College – a Christian tertiary college in Sydney, which specialises in creative arts, counselling, business and teacher education.

The first lesson Laga’aia teaches his students is: “to be a good performing artist, you have to be a great human first … You have to learn how to say please and thank you … Learn the name of the receptionist at auditions and the person manning the theatre door.”

Not only is this a fundamental life lesson, but it’s also the key to securing jobs in an industry where jobs are scarce, Laga’aia explains.

“You can be a great person and in doing so, everyone wants to be around you because it comes from a place of truth. Whereas, I know a lot of terrible human beings who are also actors who I would never work with because they are so self-centred.

“I can never understand actors who never stop to say hello to the public because they say ‘they’re just bothering me’,” he adds. “Well, they’re also paying your bills … [People in] the general public have made a decision to feed my family, go to the movies, put petrol in my car or come and see your show, and they came to see your show. So thank them. It doesn’t take much.” 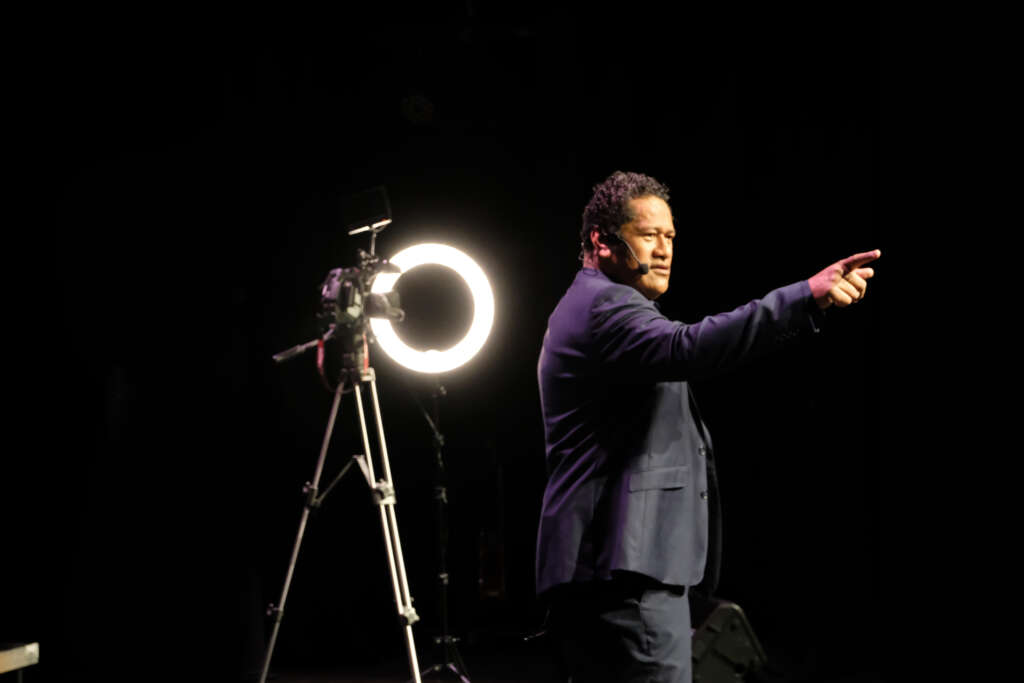 You could perhaps attribute part of Laga’aia’s own friendly, down-to-earth nature to his Christian heritage and ongoing relationship with God.

Having grown up in the church in New Zealand, Laga’aia even toured the country in a Christian band during the 1980s and did “a lot of stuff” with Youth for Christ there.

However, Laga’aia says he became disillusioned about the insularity in Christian circles.

“I’d look at them and think, ‘Look, I love your churches and that, but Jesus said go out [into the world]. He didn’t say stay in, he said go out.”

For a while he admits to thinking he had lost faith. “But even when I thought I had walked away [from God], I really hadn’t. As much as you think you’re a grown up and you don’t need God, every time you talk to your head, that’s when you’re talking to God.”

For Laga’aia, his faith is very personal – and he does not associate it with going to a particular church.

“Where do I close my eyes? That’s my church. And you can judge me on the fact that it’s not about fellowshipping. I can count the amount of friends I have on one hand, you know. I’m answerable to my family and my God, and I don’t make excuses for that.”

And, Laga’aia believes, God is present in the midst of all he does in his “secular” career.

“At [Excelsia] College, I love having conversations with students about this because we are sending them into the world. We’re not sending them to the convent.”

In this ego-driven industry, Laga’aia shares how God has been a constant reality-checker for him.

“I know my God’s talking to me because he says, ‘is it your ego or do you really need to do that job? Do you need to go and speak to those people because you want them to see you or is it because you want to have a chat to them?’”

God’s also been at the forefront of Laga’aia’s career decisions, he says, particularly one that changed the direction of his life.

“I was filming in New Zealand at the time and I was asked to go and audition for Mufasa in the Lion King. I didn’t really know what it was about,” he recalls.

“It wasn’t until years later that I realised that was him [God], because it changed my life. Doing musical theatre gelled with what I really loved doing, which was storytelling.”

“As far as I’m concerned, my God is really simple. My God tells knock-knock jokes.”

Just before Laga’aia signs off with his trademark “May the Force be with you”, he sums up his perspective on God. It’s a description that could easily be used about himself – as a kids-soccer-chauffeuring, household-chore performing international star.

“So, as far as I’m concerned, my God is really simple. My God tells knock-knock jokes. My God’s not precious. My God loves to play Sudoku and Solitaire every now and again. He understands the rules to Minecraft and he knows all the chords to James Taylor songs. That’s who my God is.”

“For me, that becomes really simple because the rules are really simple. Love one another, and never be afraid to put yourself in a position where you will look silly in order to help others.”

How prayer, politics and an African philosopher got Australian missionaries home

How prayer, politics and an African philosopher got Australian missionaries home

Letting go of the shrouds of anxiety

Letting go of the shrouds of anxiety

In her new book Fight Flight and Faith, Nikki Thompson describes how she was able…