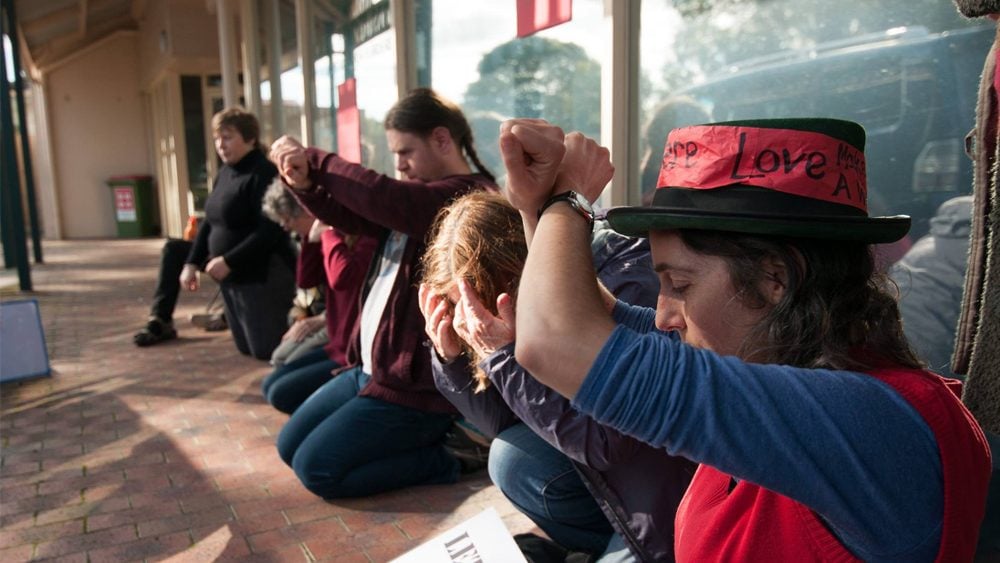 No food. No water. No sanitation. No safe place to go. No future. This is the reality on Manus. And our “aerial sit-in” this week has been one of many actions dramatising the reality that if something is not done immediately, more men will die on Manus.  My prayer is that this article might be an altar call. I don’t merely mean that metaphorically. 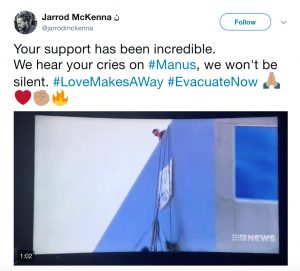 Of course there are objections. Here are some I’ve heard in the last few days:

1. Why are you mixing justice in with Jesus?

3. Jarrod as an evangelist, why don’t you just stick to the “Sinner’s Prayer”?

Let me quickly answer them.

1. Why are you mixing Jesus and justice?

Because the Bible does. Biblically, God’s Messiah and the messianic age of justice, peace and joy in the Holy Spirit are inseparable. (Romans 14:17) We cannot separate Christ, his Cross, Resurrection and Ascension from the coming of God’s kingdom. They are the coming of the kingdom! In the words of one of my biggest influences, N.T. Wright, “Either Jesus is Lord of all, or he is not Lord at all.” If your gospel isn’t good news to everything, it’s not what the New Testament proclaims as the Gospel. With Christmas just around the corner and advent approaching, we are about to sing,

If your understanding of the curse is wider than your apprehension of God’s grace, we need to have a Bible study. Let me make it plain, the Gospel is good news to the captives on Manus. The answer to that objection given by Rev. Dr. Geoff Broughton, is that we must unashamedly proclaim that the Gospel of Jesus Christ rights every wrong!

Nonviolent action doesn't have to be arrestable. So here's the altar call: Who is prepared to do a #LoveMakesAWay action in the next week?

A number of people have written this objection on my facebook page this week. The best answer I’ve ever heard came from a friend who is a worship leader (and though it’s none of your business, a Liberal voter) who after being arrested in the second #LoveMakesAWay action was asked the same question. Her response: “Um, you mean Romans 13 that was written by the Apostle Paul who went to jail repeatedly and had his head chopped off by the authorities for proclaiming the Gospel? I think he models for us what submitting to authorities means to us.”

Wow. “Mic drop”, as the kids say. I did 5 years at theological institutions, wrote two papers on the passage, yet that response just sums it up.

We must never forget that Hitler loved to quote Romans 13 to keep the church docile. We must also never forget that our resistance to the Powers must look like Romans 12 and the remainder of Romans 13. In short, “Do not be overcome by evil, but overcome evil with good.” (Rom.12:21) Yet I want you to hold me accountable – if I ever start “hitting and splitting” instead of “staying and praying” please remind me of that passage if I’m not submitting to the authorities. 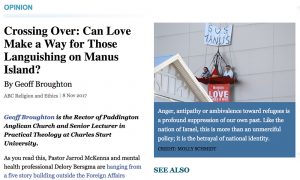 Image of Love Makes A Way protesters hanging from a building outside the Foreign Affairs Minister’s Office. ABC Religion and Ethics

3. Jarrod as an evangelist, why don’t you just stick to the “Sinner’s Prayer”?

[I know Australia’s like Kanye West sometimes – “act we don’t think”. So if you have to skip the theology to the altar call, so be it. But I plead with you to take Biblical authority more seriously and read this section.]

Let me explain. Variations of “the Sinner’s Prayer” arose in the Great Awakenings when evangelists helping people make faith personal and (don’t miss this!) signed them up to a political campaign that was in keeping with Gospel proclamation. I’m not making this up. Charles Finney, an innovator of the use of the “Sinner’s Prayer” gave people the opportunity to make faith in Christ both personal, AND practical for “the least of these”. In particular, Finney was literally signing you up to end slavery when you came down the front. If people weren’t willing to sign up for fight for the abolition movement, Charles Finney would turn them away saying they hadn’t put their faith in Jesus! And yes, refugees, that is “strangers”, are explicitly mentioned in Matthew 25 as where Christ is camouflaged as the poor. (Matt. 25:35)

In our hyper-individualistic culture(s) the “Sinner’s Prayer” can become a magic incantation to avoid hell rather than putting us on the journey towards baptism, being immersed in Christ and God’s kingdom agenda.

The early Christians did not pray the “Sinner’s Prayer” as isolated individuals to become Christians. They prayed the Lord’s Prayer together in response to the grace of God. When they responded to the Gospel by entering into the waters of baptism they joined a new community.

More than just a personal prayer, baptism was a political changing of allegiances. Where nationalism, patriotism, racism, violence, lust and greed named us, in baptism we were given a new name, and died to these Powers, so we could be raised in the name of the Triune God (Matt. 28:19, Gal. 3:26-29) to walk as Jesus walked. (1 John 2:6)

This is what is needed with our refugee crisis – the church to live into our baptism.

We have Christians in Australia responding to those on Manus as Australian citizens. Instead we need Australians who have died to our national identity in baptism so we can respond as Christians. In doing so we will witness to the redemption of the nations. Baptism is where the early church were immersed in the narrative of God’s liberating-love. They were immersed in the reality of repentance, forgiveness of sins, God’s community and the seal of the Holy Spirit. (Acts 2:38) For the early church baptism was being birthed anew into God’s New World breaking-in (Jn. 3:3-5, 1 Pet. 1:3, Titus 3:5). They died to their old self formed in the patterns of the kingdoms of this world and were raised with Christ into the nonviolent redemptive patterns of discipleship. (Rom. 6:3-11, Col. 2:12)

In doing so they didn’t merely invite Jesus into their heart as their “personal Lord and Saviour”. More than that, they responded to Jesus’ invitation to enter into God’s heart to heal all of creation. Baptism was not merely an outward sign of an inner reality; it was a personal appropriation of the outward coming of the Kingdom of God. They pledged allegiance to Christ as cosmic Lord and Saviour of all creation (1 Peter 3:21). As evangelists we are commissioned to call the world into a community that prays the Lord ’s Prayer and allows the Holy Spirit to move us into action. We are baptised into a community that witnesses to the kingdom coming on earth. (Matt. 6:9-13) And as the church, we must act to show God’s kingdom wants to come to Manus.

Yes. Living at First Home Project with refugees has unquestionably altered my perception. But this has been part of my conversion. Living daily with people who spent four years on Manus means I see through their eyes more and more. Watching the news – and having my neighbours interrupt the stories from Manus saying, “That this Adam. He loves the Lord Jesus. Let us pray for him.” – changes the way you watch the news.

I’ve had an interesting week. On Sunday I was praised in the newspapers for showing compassion to refugees, Wednesday I was slammed for asking for justice for refugees. I thought of the witness of Helder Camera and his famous quote, “When I give food to the poor, they call me a saint. When I ask why the poor have no food, they call me a communist.” Discipleship of Jesus calls us to do both.

And discipleship of Christ Jesus means we don’t have a neutral claim on the truth. As politically incorrect as it may be, our Lord says, “I am the way, the truth and the life”. (John 14:6) Truth for the baptised is not objective, it’s relational. A relationship with Jesus means we must be found where he is found, partying with who he partied with, the lost, the last, the least of these. The persecuted church, who in part are found on Manus, offer us a way of seeing the world that calls us to conversion. We must live Christ’s way, proclaim him as the truth, and live his life.

So, with every head bowed and eye closed,

Do you accept Jesus’ invitation to God’s heart for the world, especially these men on Manus? Do you give your life to be baptised into Christ, dying to your old-self and rising with Christ? Will you take action this week on behalf of our brothers on Manus and join #LoveMakesAWay?

Jarrod McKenna is the co-founder of First Home Project, a community welcoming, housing and “giving a hand up not a hand-out” to recently arrived refugees, is the Teaching Pastor at Cornerstone Church in Perth, was a part of initiating the #LoveMakesAWay movement, and is a peace award winning nonviolent social change trainer, working primarily in the Middle East and Eastern Europe when not at home.

Lets us know if you responded to Jarrod McKenna's Altar call.