In the 1960s and 70s, Anzac Day seemed to be an institution facing a slow and determined demise.

Back then Anzac Day marches included a good number of old WW1 vets, but were dominated by a generation of guys about to retire, who served in WW2. At that time, many people criticised Anzac Day, accusing it of glorifying war. Protest, particularly about the Vietnam War, dominated the discussion and Anzac Day seemed destined to die out with the Diggers.

To remember the cost of war neither glorifies war nor undermines peace.

Today, when it comes to Anzac Day, protests and problems are long gone and have been resoundingly replaced by pride and participation. Numbers at Anzac Day ceremonies continue to grow. Vets now march with children and grandchildren honouring their ancestors. Attendance at dawn services all over the country is astounding.

Thousands of young and not-so-young Aussies travel to the dawn services at Anzac Cove and Villers Bretonneux and millions watch the services on the ABC. Current Australian Defence Force members march in uniform all over the country and are cheered by crowds.

Marching for the first time in uniform as a Navy Chaplain in 2013, I was surprised, shocked and amazed at the respect, kindness and gratitude that people showed today’s defence members. Marching past Dick Smith in the crowd who was holding a small sign with the words “Thank You” choked me up.

The reasons for the national change of heart about Anzac Day are myriad and maybe not that simple, but clearly beyond the scope of this article. Instead, I want to simply suggest that Anzac Day is a good thing and that it offers Christians a chance to re-engage at a moment when many Aussies are thinking about something deeper.

To give thanks surely is a good thing. To remember past sacrifices, to acknowledge very real suffering, and to reflect on the fact that evil sometimes must be resisted is thoroughly consistent with the things Christians hold as sacred.

To remember the cost of war neither glorifies war nor undermines peace. Historically sometimes peace is only secured by paying the price of war. The whole concept of a just war may have more ancient antecedents but the Western World, at least, owes its origin to a Christian doctrine originating with Augustine. 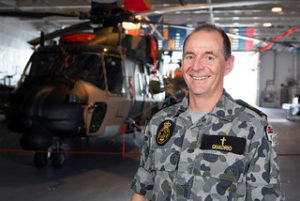 “Lest we forget”, the most haunting words of any Anzac service, remind us of the terrible price we pay if we forget to count the cost and suffering of war. Many Anzac Day ceremonies include a prayer for peace. To remember war is to remember to avoid war unless it is absolutely necessary.

It is good to remember that the members of the Australian Defence Force still serve the defence of our nation. This is not just theory. One of the key roles of a Defence Force is to remind our enemies that we are serious about protecting the people of our land. Defence policy talks about the importance of posture. I have sailed into many ports in our region and beyond within a task force of Navy’s most potent and powerful platforms. The public purpose of these visits is to remind our neighbours that these ships and crews could be used to help them in a Humanitarian and Disaster Relief Operation. This is true, it happens regularly and is part of Australia’s aid. The warships also represent a not-so-subtle reminder to our region that we are ready to defend ourselves if necessary and it would be wise to avoid aggression.

Many Christians are unaware the Anzac Day traditions… were the work of an Anglican Priest, Canon David Garland.

Many Christians are unaware the Anzac Day traditions that people now flock to in their hundreds of thousands were the result of the work of an Anglican Priest, Canon David Garland. Garland pushed for national uniform events to remember the fallen and he wrote ceremonies. The minute’s silence, for example, was his attempt at allowing time for non-sectarian prayer.

Some Anzac Day ceremonies are still thoroughly Christian. Others are sort-of-Christian or a (sort of weird) expression of civil religion. I suspect ceremonies over the next decade or two will become increasingly secular and multi-faith. Today the RSLs and sometimes local city councils control the events, but often a chaplain, local church pastor or enthusiastic believer is asked to offer a prayer and, occasionally, more.

At the Sydney dawn service in 2013, I was introduced as “our chaplain” and invited to pray. I did so, and afterwards a guy in the street asked me for a copy of my prayer. I gave him my only hard copy and was surprised to find out later that he was a journalist for AAPT, the news service. Throughout that day words, phrases and lines from my prayer appeared in many papers and electronic news media all around the country. I was a local church pastor for the best part of 30 years and no media anywhere had ever published one of my prayers. I was a Navy Chaplain for half a dog’s watch when my Anzac Day prayer was quoted in the Sydney Morning Herald and in media across the country.

An event where suffering is praised, sacrifice is honoured and where giving is regarded as more important than receiving should be supported by the followers of Jesus.

Secondly, if you are asked to participate in an Anzac Day event as a pastor or church member, please accept the invitation. Don’t squabble about having to say “In Jesus name” at the end of your prayer. Rather, pray words that best represent Jesus’ heart and voice with or without the credit at the end.

Finally, why not organise a pre- or post- Anzac Day outreach church service at your church? I spoke at one such event last year at Mosman Anglican Church in Sydney, where many non-church members attended. I invited a young officer friend from the Navy who admitted that, at age 23, he had never been in church in his life. He found that the Anzac church service was building a bridge to him and he gladly accepted my invitation to come.

As a local church pastor, I spent a lot of time encouraging those outside our church to come. As a chaplain, I learnt the importance of going.

Anzac Day offers a relevant opportunity for Christians to do both!

Richard Quadrio is a chaplain in the Royal Australian Navy and a Presbyterian minister.