Are people with disabilities really superhuman?

The promotional ad for this month’s Paralympic Games is nothing short of spectacular.

Entitled “We’re the superhumans,” the ad, from the UK’s Paralympics broadcaster Channel 4, features The Superhuman Band fronted by Aussie musician Tony Dee. Tony was born with spina bifida, a birth defect where there is incomplete closing of the backbone and membranes around the spinal cord, and uses a wheelchair full time.

“I think God gave me a reason to be on the earth and this is a part of it.” — Tony Dee

The producers of the ad embarked on worldwide search for a frontman for the band, and they were looking for someone with a disability. They approached Tony after they saw a clip of him singing on YouTube, and he beat thousands of other applicants to be selected to front the band.

Tony and the band perform a cover of Sammy Davis Jr’s ‘Yes I Can’ in the three minute ad. “’Yes I Can’ communicates a lot of things,” Tony told Eternity. “I believe each one of us is here for a reason, and that’s the thing that we can do. So for example, my thing is music and singing, putting a smile on peoples faces, and I can do that, regardless of a so-called disability that I have or whatever challenges may be in the way. I think God gave me a reason to be on the earth and this is a part of it.

“And the people who are really struggling with disability are the people who don’t know what that purpose is or can’t see themselves achieving it,” says Tony.

Shane Clifton, a theology lecturer at Alphacrucis College in Sydney who became a paraplegic six years ago after a tragic accident, disagrees with Tony.

“…disability is about what it is to be human, at one and the same time strong and weak, confident and fearful, successful and failing…” — Shane Clifton

A positive attitude will not enable a person to overcome every barrier they face in life, writes Clifton on his blog. “While it might be a motivating sentiment, it’s just not true.”

“Disabled people aren’t superhuman,” writes Clifton, “On the contrary, disability is about what it is to be human, at one and the same time strong and weak, confident and fearful, successful and failing – occasionally triumphing, but most of the time wanting the same thing as everybody else; to be treated neither as freakish or superhuman, but as a family member, friend, and colleague. 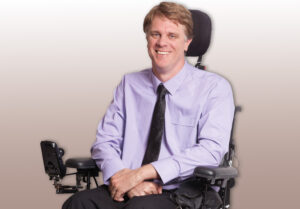 Clifton believes that the majority of people with disabilities cannot do the things shown in the Paralympics ad, and that while it’s right to celebrate the achievements represented in the advertisement, the lyrics ‘gee I’m afraid to go on has turned into yes I can’ are “downright insulting”.

“I’ve never met a disabled person who is afraid to go on,” writes Clifton, “but I’ve met some who can’t go on because in one way or another the world in which they live in has said, ‘we want nothing to do with you’. And no positive attitude can solve this.”

Clifton goes on to make the point that disability is primarily a social problem, centred around the idea that people with disability are excluded from certain public and private spaces, or public transport.

Dee agrees, “if a person can’t get into their community and be part of it then it’s not necessarily the person that’s dysfunctional, maybe it’s the community. Maybe access is the issue.”

Pray that God would be glorified during the Paralympics.

The bewildering and beautiful diversity of disability My son has a wonderful disability