And he really wants to be back there

It is feared at least one quarter of a billion people across Africa could contract the deadly coronavirus over the next 12 months.

Despite the risks, Australian missionary obstetric surgeon Dr Andrew Browning is champing at the bit to get back to help.

In Sub-Saharan Africa, one in 37 women die … due to complications during pregnancy.

“After having lived most of my adult life in Ethiopia and Tanzania treating thousands of women for obstetric fistula and caring for thousands of pregnant women, I feel that is where my ministry is,” Browning said.

Dr Browning became attracted to working in Africa after hearing a talk from a missionary nurse at Sunday School when he was just six, growing up in Bowral in the Southern Highlands of NSW.

He first worked in Ethiopia with pioneering fistula surgeon Dr Catherine Hamlin in 1996 and moved there permanently in 2001. He married school teacher Stephanie Hall and they raised their two children in Ethiopia and Tanzania as Andrew operated in places such as Sierra Leone, Chad, Kenya, Togo, South Sudan, Somaliland, Nepal, India, Bangladesh, Malawi and the Congo.

“God has blessed me with the surgical skills to have been able to operate on more than 7000 women who have suffered terrible birth injuries as a result of obstructed childbirth,” Browning said.

One of the more common complications is an obstructed labour. If a woman cannot get to a hospital for a caesarean, she runs the risk of developing a debilitating fistula where she is left with malodorous urine and/or faeces leaking from her body for the rest of her life.

UN officials believe the coronavirus pandemic will kill at least 300,000 people in Africa and push another 30 million into poverty

“These fistulas, which are holes inside the women, come after being in labour for sometimes up to 10 days,” Dr Browning said.

“In Western nations like Australia, women who have over-sized babies or are obstructed for one reason or another simply go to hospital for a caesarean – and the baby is removed easily and safely through the abdomen.

“However, in places like Africa, millions of women do not have access to this sort of intervention; labour can continue for days until both baby and mother die.

“It is an incredibly sad situation.

“If the mother survives – and they often don’t – they are left with internal holes between the vagina, the bowel, the bladder and other organs. Their life is now one of misery because they leak urine and faeces.

“Their husbands often divorce them and they are ostracised by their local communities. 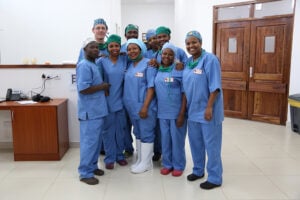 “What a joy it is for me to be able to live and work in Africa and to be able to cure them of this terrible affliction – an affliction which often leads to depression and attempted suicide.

“I have had the good fortune of operating on women who have had a fistula for up to 50 years and I have been able to cure them in just a matter of minutes. Praise God!”

UN officials believe the coronavirus pandemic will kill at least 300,000 people in Africa and push another 30 million into poverty. With a population well over one billion, the African continent could be the next epicentre for this invisible deadly threat.

Dr Browning has worked in Africa during Ebola outbreaks and has contracted malaria more than once. On one occasion, the mosquito-borne disease almost took his life. But despite the obstacles Dr Browning sees his work as an instrument of God.

This obstetrician is not content just reversing fistulas. Through his charity Barbara May Foundation, he wants to stop fistulas occurring in the first place.

After 17 years living in African nations, Dr Browning and his family have returned to Australia so his two sons can attend high school. While away, they did not miss out on primary education because wherever they went, their mother set up schools for them and other children needing education.

“Many more women are delivering at home and I’ve heard of many dying trying to do so.” – Andrew Browning

Many people would sit back proudly and reflect on what they have achieved in 17 years but Dr Browning is not prepared to rest on his laurels. He returns to Africa four to five times a year to operate on women who continue to suffer.

He is also able to supervise the hospitals he has established in Ethiopia and Tanzania.

“Thanks to people donating to the Barbara May Foundation, we were able to establish hospitals not only to repair fistula but to stop them happening in the first place – by introducing first-class maternal care,” Dr Browning said.

“Tragically, with the spread of the coronavirus, African women – like most of us – have not been allowed to move out of their towns to attend hospital to be operated on, or even get to hospital to deliver their baby.

“Many more women are delivering at home and I’ve heard of many dying trying to do so.”

Travel from Australia is not permitted now into most of the countries where Dr Browning works, so he cannot go to help.

“It saddens me knowing these women were looking forward to being cured, only to have their hopes dashed at the last minute. I pray they do not contemplate ending their lives as so many women do once they develop a fistula,” Dr Browning said.

Another challenge facing Dr Browning is the drying up of donations to his charity Barbara May Foundation, due to the ongoing effects of COVID-19.

“We need to keep running our hospitals in Tanzania and Ethiopia if we are to cure women of fistula and, at the same time, stop other women getting one in the first place.”

“To help eradicate this debilitating condition we need another 2,000 maternal hospitals in Africa. We now have three functioning maternity centres so we just have another 1,997 to go!”

Dr Browning is writing a book about the life of women suffering from – and often being cured of – fistula. With the working title Into Africa, it will be published by Pan Macmillan next May. Click here for more information.

Dr Browning was interviewed by Jenny Salt on the Eternity Podcast ‘Salt: Conversations with Jenny.’

He also appeared with Natasha Moore on Centre for Christian Public Christianity’s Life and Faith podcast.

The ‘Catherine Hamlin’ will serve Sydney from January