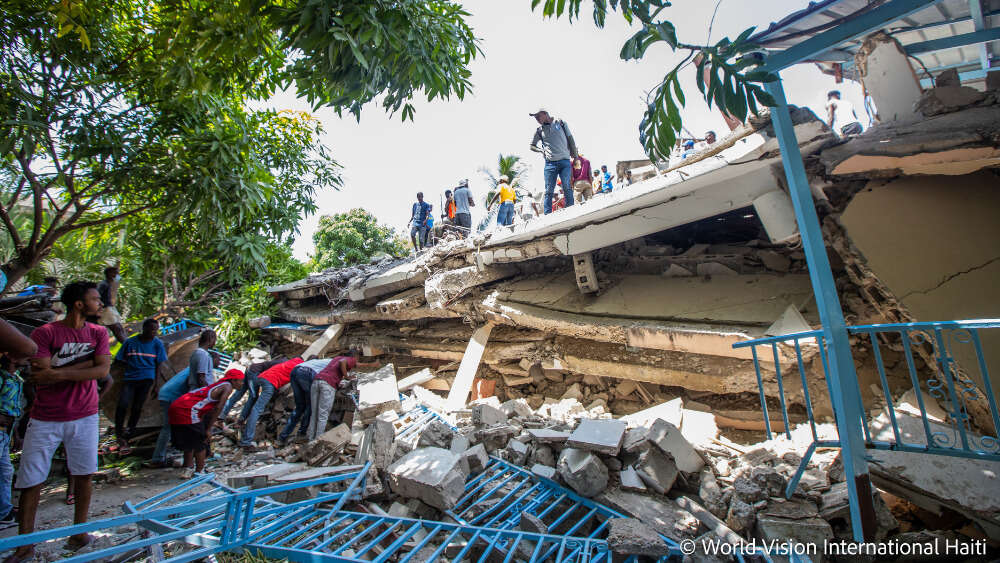 At least 1,941 Haitians were killed when a 7.2 magnitude earthquake struck Jeremie and Les Cayes, located in Haiti’s southern peninsula, at 8.30am local time on Saturday, 14 August.

With a depth of around 10km, the earthquake’s epicentre was recorded around 12km northeast of Saint Louis-du-Sud, which is about 125km west of the capital Port-au-Prince. In the last week, the MAF team has provided initial relief flights, one of which included flying a team of eight Haitian nurses (pictured) to Jeremie to treat the wounded.

In addition, more than 800kg of medical supplies have been delivered to Jeremie, and injured patients have been transported to Port-au-Prince in partnership with another well-established missionary organisation, Samaritan’s Purse.

MAF has been working in Haiti since 1986, serving Haitian communities daily through medevac flights, medical services, food and produce deliveries along with people transport.

The organisation has five missionary families and 19 local staff stationed on the ground in the country, using three airplanes to conduct their work. Thankfully, the organisation has reported none of their staff were harmed in the earthquake.

World Vision Haiti has also reported all their staff and Haitian beneficiaries safe and accounted for.

World Vision has provided immediate aid to the first wave of 6,000 people, prioritising the most vulnerable. The organisation has deployed a team of first responders to assess damage and needs on the ground and coordinate rapid responses with partner organisations in the coming days.

World Vision Haiti’s Director of Operations, Dr Leslie Michaud, reported in a vlog a need for water, hygiene kits, and kitchen kits in the areas most affected. “3 children were rescued under this house. One died from his injuries at the hospital,” reports World Vision worker. Image: Jean Baptiste Fritzner.

Dr Michaud said that in Jeremie, where many buildings have been wrecked, people are trying to clean up and return to life as normal, but his team holds serious concerns for their mental wellbeing.

“People are very stressed. They are very concerned about aftershocks. And in conversations that we’ve had with some kids … they are very afraid because, five years ago, Jeremie was affected by Hurricane Matthew and they are not yet fully recuperated from it. We feel that they are losing hope,” he says.

“Yesterday was really difficult for me. I lived it very badly. It seems like the tremors lasted all day. I couldn’t support all the shaking. I cried. My head hurt all day,” Daylie, a 15-year-old girl from Jeremie, told World Vision workers.

“The day was one of the worst in my life. My house was destroyed and we had to abandon it. It’s a two-storey building. The whole first floor is so damaged that it could fall on us. Last night, I slept at a neighbour’s open yard. The aftershocks have not stopped.”

World Vision has also warned that while a recent surge in COVID-19 cases has tapered off, the possible displacement of people might create ripe conditions for another spike in COVID-19 infections.

In the past 24 hours, all search and relief efforts have been hampered by Tropical Storm Grace, which has lashed the country with heavy rains and winds, leading to flash flooding and landslides.

“Our teams on the ground witnessed families laying in the open, without shelter, and unable to obtain a dry place where to stay. Meanwhile, flights to move life-saving items were suspended given to the ill weather caused by tropical storm Grace,” said Marcelo Viscarra, National Director of World Vision Haiti.

Grace, a tropical storm poured three to five inches of rain in some areas, and even 15 inches in some regions in southwest of Haiti, with 50 mile per hour winds.

“People were crying out for the wind and rains, the only things they had to cover themselves were some bedsheets. Those who were able to save some items from under the rubble saw their belongings drenched by the rain,” said Guy Vital-Herne, World Vision’s Communications Officer who is in Jeremie.

To prevent accidents and for security reasons, private flights and those planned as part of the humanitarian response were suspended.

“We expect to pick up speed and reach people in dire and extreme needs as soon as possible. We ask for your prayers to have better conditions in the coming days to deliver aid,” said Viscarra.

Now that Tropical Storm Grace has passed, the search for survivors has resumed.

The department of civil protection has reported 700 collapsed buildings, including hospitals, schools and churches, and 2,410 destroyed homes in the department of Nippes and 1368 in Grand’Anse, forcing at least 470 people to seek refuge in shelters, with thousands more thought to be displaced.

Reports say almost 10,000 people have been injured, and many are still missing – numbers that are still rising. The United Nations reports about 500,000 children now have limited or no access to shelter, safe water or food.

Haiti’s latest natural disaster comes just over a month after Haiti was plunged into political turmoil by the assassination of President Jovenel Moise on July 7. The destabilised government has been cited as another issue that has slowed relief efforts. Yet another complication is that the main road to access the southern peninsula has been closed in recent months because of violent gang activity on the edge of Port-au-Prince.