***Press refresh for our latest updates***

This has been a tough election campaign for Christians in the United States, many of whom have felt conflicted since the arrival of Donald Trump. In a surprise to many pollsters and political commentators, Trump has managed to win the swing states of Ohio, North Carolina and Florida.

Eternity has been watching as the results have unfolded, and has collated a selection of responses to the vote from some key US Christian commentators.

6.42pm: Donald Trump is the new President-elect of the United States

The New York Times and the ABC are reporting that Donald Trump has won the election, making him the newest President of the United States. 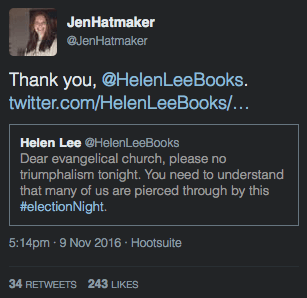 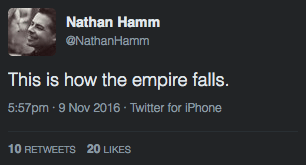 6:01pm: The Babylon Bee calls the election in favour of Jesus Christ

“News organizations were closely tracking votes tallied for Donald Trump, Hillary Clinton, and the various third-party candidates into the night, but by 11:00 p.m. EST, the majority of major television channels and news sites agreed that the Lord Jesus was still sovereign over all creation.

“Clearly God continues to be in complete in control of everything as He reigns in glory,” it said.

5:40pm: faith advisor to President Obama, Michael Wear, on the impact of the Catholic vote, and what comes next 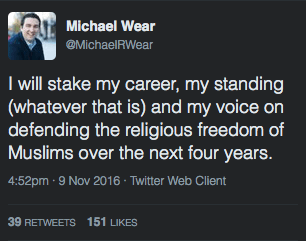 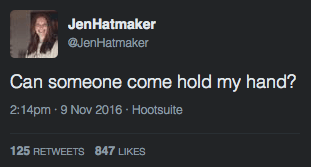 In a blog post, the right wing shock jock says, “I never saw this coming and I clearly [am] terrible at predicting the future. This really is an amazing night. Even if Hillary Clinton can pull off a win, the reality is that I, so many others, and so much data were all wrong.

“From here on out, I cannot in good faith make predictions about candidates. I clearly suck at it.

“I and so many others need to focus on the issues and advocate on issues, policy, and candidates without presuming something or someone can or cannot win.”

5:09pm: church pastor Nate Pyle is looking to the future 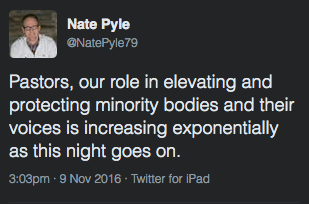 4:45pm: Southern Baptist Russell Moore thinks that no matter who wins, he loses

“…no matter what happens in November, I lose.” – Russell Moore

In an interview with The New York Times in October, Moore said, “I’m pro-life, pro-family, pro-racial reconciliation, pro-immigrant and pro-character in office, so no matter what happens in November, I lose.”

4:40pm: Florida pastor Nathan Hamm reflects on the difference between Jesus and Trump 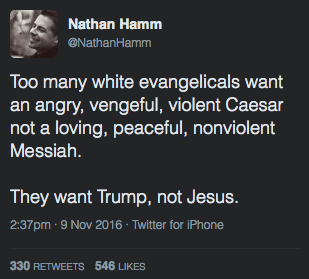 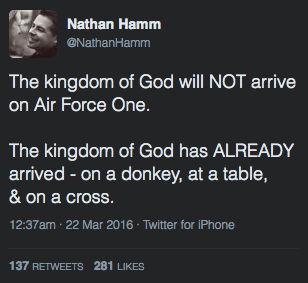 4:32pm: Rachel Held Evans despairs of how to tell children that Trump has won 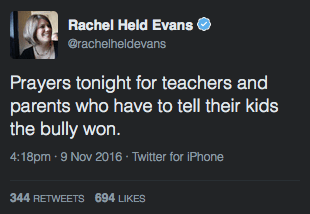 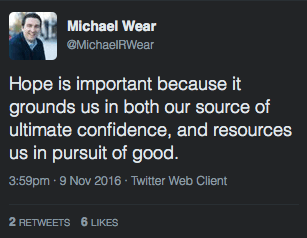 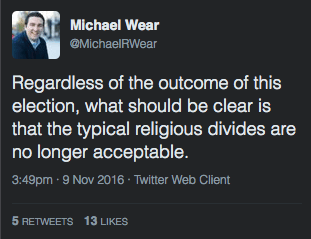 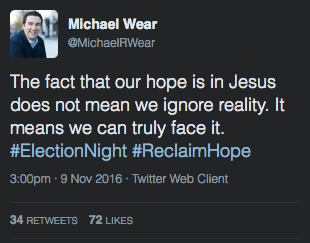 The poll, which is just a snapshot of voters as they leave the polling place, shows a high percentage of Trump voters among Christians. 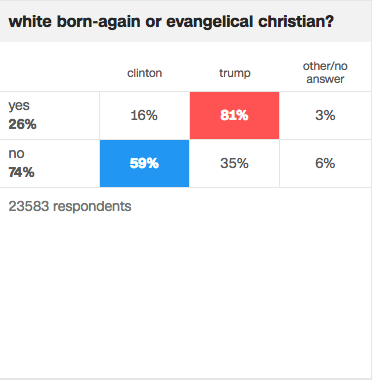 2:59pm: evangelical leader who backs Trump is encouraged by the numbers

Christian Today reports that Jerry Falwell Jnr, president of the large Christian Liberty University, who has publicly backed Trump, spoke to the BBC moments ago.

“The Donald Trump I know has a big heart, he loves people, he loves this country.” – Jerry Falwell Jnr

He said it was, “really encouraging to see the numbers. I’m very optimistic about the results. It’s going to go right down to the wire, definitely a nail biter.”

Falwell denied Trump admitted to groping women and added: “Evangelicals believe all people are sinners. We’ve all done wrong, we all need forgiveness. The Donald Trump I know has a big heart, he loves people, he loves this country.

Donald Trump is being declared the winner of Ohio – a closely contested swing state which may be a factor in the outcome of this election. 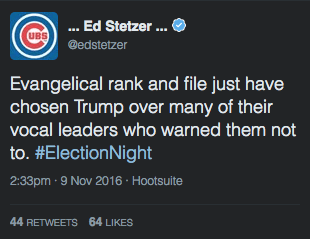 Robert Jones, a columnist at The Atlantic online and author of The End of White Christian America reveals that high numbers of evangelicals voted for Trump. 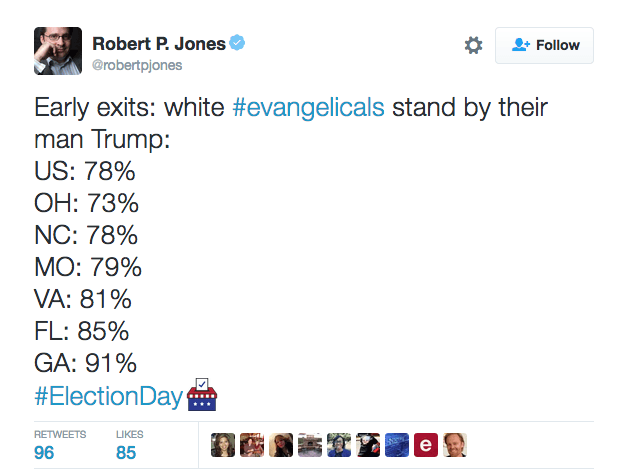 In a Facebook post Evans said, “Today I voted for Hillary Clinton for president. It wasn’t a difficult choice, and I’m not embarrassed about it […] with voting, the question isn’t *if* you will compromise but *how* you will compromise, and I can live with those compromises.

“After all, my ultimate allegiance is to a Kingdom that transcends candidate, party, and nation, one that knows no geographic borders and can’t fit on a ballot.

“So vote. Let your “yes” be “yes” and your “no” be “no.” Then carry on with the good work of the Kingdom, against which even the Gates of Hell cannot prevail.” 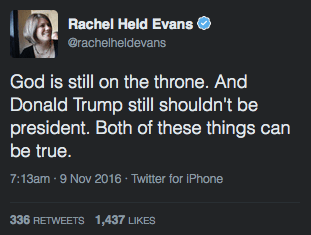 Keeping it real, one Catholic Church in San Diego told its parishioners that “it is a mortal sin to vote Democrat,” and claimed Hillary Clinton was under the influence of Satan. Read the story. “Whatever happens today, may your name be declared holy. May you be glorified and honored. May your people honor you with their hearts, words, and actions this day whether they speak in the public sphere or in the privacy of their own homes.”

1:17pm: The Ethics & Religious Liberty Commission of the Southern Baptist Convention with some advice for believers 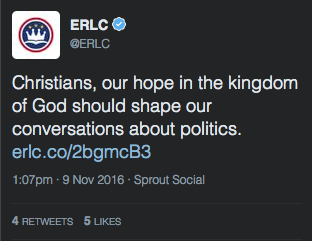 1:16pm: Russell Moore and Ray Ortlund on why Christians don’t need to panic and despair, no matter the outcome of the election

There are plenty of reasons to despair, but we can turn our eyes to the Lord. The sun will rise tomorrow, Jesus is reigning and ruling, and we are going to accomplish things for Jesus each and every day.

12:56pm: head of Southern Baptists says we need a guarantee of religious freedom

Speaking to American journalist Katie Couric, Russel Moore said, “What we need is a first amendment that’s defended in a way that religious freedom is guaranteed for everybody.” 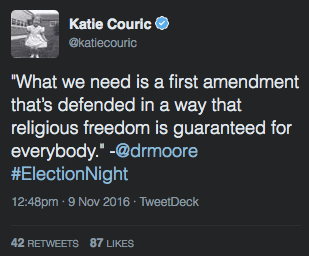 Robert Jeffress, the pastor of the First Baptist Church of Dallas, Texas says it is imperative for Christians to vote for Trump. to stop the assault on religious liberty and the unborn.

“For Christians not to stop the assault by voting for Trump is morally inexcusable,” he said. 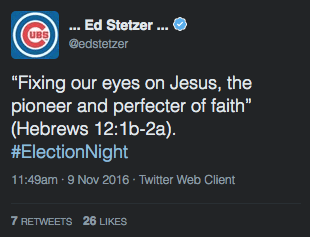 11:20am: Erick Erickson on the impact of Trump’s Access Hollywood video

A video released by the Washington Post earlier in 2016 showed Donald Trump in an extremely lewd conversation about women in 2005. The video was recorded in September 2005 in the NBC Studios parking lot. In the video, Trump indicated that he might start kissing a woman that he and Billy Bush were about to meet during the filming of an episode of Access Hollywood. 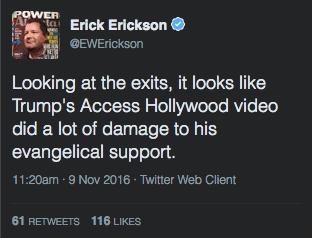 11:00am Wednesday 9 November: Right wing shock jock says God’s will being done in this election

Erick Erickson, a right wing radio shock jock, Bible college student at Reformed Theological Seminary and one of the early leaders of the ‘Never Trump’ movement, wrote a blog post on conservative Christian website The Resurgent, saying, “For months on end, certain Christians have told us that Trump was God’s instrument. God, they have told us, has used bad men through history to advance the church. They told us to vote for Trump because it was God’s will.

“Too many Christians have thought that by their own actions they could fix this country. They cannot. They must rely on the strongest man, the one who conquered death, not a strong man promising to make great again what God will one day make new.” – Erick Erickson

“Scripture commands us to pray for our leaders. After today, that will most likely include Hillary Clinton,” wrote Erickson.

10:35am: Trump supporter Eric Metaxas urges everyone to vote 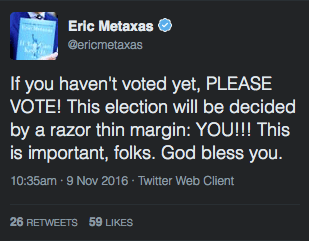 Pray that American Christians will trust in God’s sovereign rule over their nation.