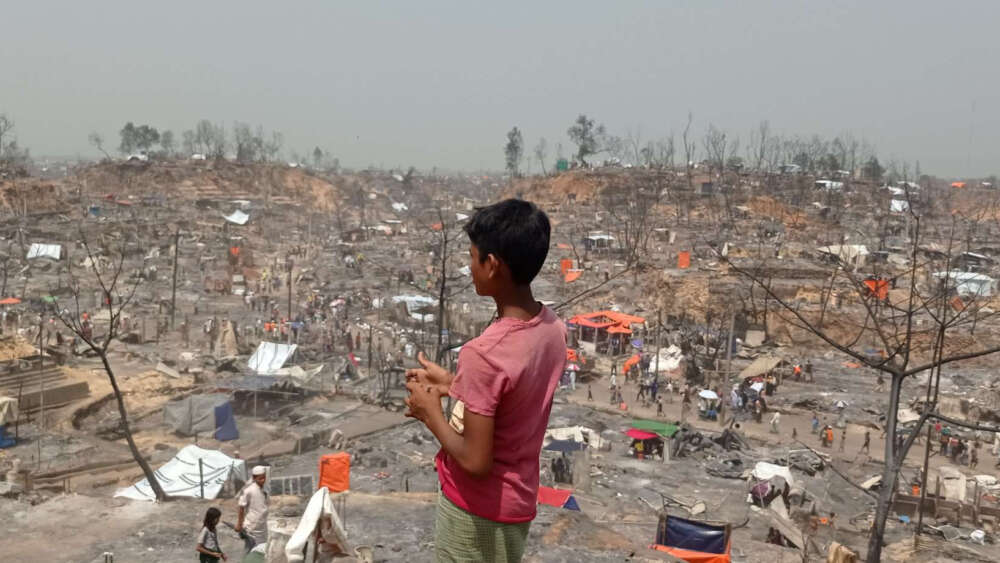 Thousands of people were left without shelter in March when a fire ripped through the world's largest and most densely populated refugee camp in Cox's Bazar, Bangladesh.
World Vision Bangladesh
World refugees

“What I have learned is that these are really traumatised people. Really traumatised,” says 42-year-old Atul Mrong, operations director of the Rohingya Crisis Response in the refugee camps in Cox’s Bazar, Bangladesh.

Atul was on the ground at “8 East” camp on March 23 this year – in the immediate aftermath of a deadly fire that had torn through the camps just one day earlier. The blaze killed 11 people, left more than 45,000 refugees without shelter and destroyed essential infrastructure, including food-distribution points and water and sanitation facilities.

Atul told Eternity that fires broke out around 3pm Bangladesh local time, when most parents were away from their shelters working. That left older children and teenagers to save their younger siblings from the flames, leave their families’ few posessions to go up in smoke, and flee for their lives.

One of these children was 14-year-old Baitulla, who was at his family’s home with his six and nine-year-old siblings. Atul describes Baitulla facing an agonising moment before realising he had to let the family’s possessions burn in order to ensure his siblings’ safety.

The three children spent the entire night at a community centre, unable to locate their parents. The next day, they returned to the site of the fire – a massive space that had destroyed the shelters of more 10,100 households in total, and were able to identify where their home had previously been.

There, among the crowds, the three children were reunited with their frantic parents who had spent the night searching for them. Atul says it was a God-given, “wonderful opportunity to meet together again.”

Cox’s Bazar is world’s largest and most densely populated refugee camp. There, nearly one million displaced people live in temporary shelters on the hillsides of the region, having fled ethnic persecution by the military government in neighbouring Myanmar over the past several years.

But this year, refugees at Cox’s Bazar have faced an additional challenge, experiencing 84 fires in just four months, according to the Inter-Sector Coordination Group (ISCG) – the central coordination body for humanitarian agencies serving Rohingya refugees in Cox’s Bazar. Last year, 82 fires in total were reported.

On March 29, ten fires were reported in one single day. Then, only a fortnight later on April 12, a major fire broke out in the camps, destroying eight family shelters along with a mosque, a women’s centre and a children’s learning centre. But the most deadly blaze was the one that broke out on March 22.

These are people who have already been chased from their homes in Myanmar and who are living in temporary housing, Atul emphasises. Their hope is that one day they will be able to be voluntarily repatriated to their homeland safely, through an agreement that ensures their dignity and human rights are protected.

“Talking to them, it is very clear that their mind is still in their home country,” Atul says.

He says that while the refugees living in Cox’s Bazar are aware of current events in Myanmar – events that include a coup by the military junta that has seen democratically-elected leader Aung San Suu Kyi put under house arrest and widespread protests in response. But Atul says he is not sure how much detail they know as then Bangladeshi Government has secured the borders between the countries, so there have been no new refugee arrivals in the camps.

“In the space of few hours … they lost everything.” – Atul Mrong, Rohingya Crisis Response

But the fire of March 22 turned the sparse shelters and belongings of the camp’s displaced inhabitants to ash, evoking the same trauma that left them to leave their homeland.

“Nobody expected to see these people sleeping under an open sky or under a tarp. Before the fire, these areas of the camps were filled with infrustrcture,” Atul says. “Water infrustructure, other social infrastructures. And then in the space of few hours – so by around five o’clock or six o’clock – they lost everything. Then, the entire infrastructure was turned into ashes.

“They are God-created people, like you, like me, and they are staying under the open sky, in front of burned ashes, burned-up metal. So this was really hard to see,” he says.

For Atul, the first 20 days following the fire were filled with heartbreaking but rewarding work.

“I feel really happy and fortunate that where the fire was – the fire affected three camps – in these three camps, World Vision Bangladesh was the food distribution focal point. That means we had the authority and responsibility to distribute more than 1.2 million food packets – hot meal food packets – to the around 50,000 highly affected people,” he says.

“And I would say that we are lucky that almighty God has given us this type of wonderful opportunity to serve the most vulnerable community over there.”

In the aftermath, UN agencies and their partners working in the area have been able to equip the 48,300 people who were directly affected with temporary shelters made of bamboo and tarpaulins. More durable solutions are being discussed and planned at present. In addition, families have been equipped with essential clothing and cooking supplies, including stoves and gas facilities. Temporary wash facilities have also been established, with permanent facilities under construction.

World Vision has been working with refugees on the ground in Bangladesh since the beginning of the refugee crisis in 2017. The organisation currently cares for 265,000 Rohingya people, who live in 23 sub-camps and in neighbouring host communities, with more than 800 stafff and volunteers.

Atul – though not a refugee – clearly has a sense of solidarity with those people he serves, having himself experienced the benefits of being a World Vision sponsor child.

“I was also vulnerable, just in regards to education, due to my family conditions and the capacity of my parents to educate me,” he says. “But it was so nice of the Almighty Creator that he has linked me with the sponsor.”

Atul says that he doesn’t know for sure where his sponsors live, but he assumes it is in Australia as they used to send him beautiful cards that often featured photographs of kangaroos or koalas.

“What I can say is that God has really gave me that opportunity to link up with this very kindhearted, benevolent person. And because of this, of course I am here today. I am really thankful. I’m really grateful for this opportunity. It would be really a happy moment for me if I could at least say, face-to-face, thank you very much for all your support,” he says.

“And I am really grateful for the way I got the opportunity to use my leadership skills, as well as to be able to contribute to the most vulnerable people on the planet at this moment.”

Refugee children in the camps are missing out on the education they need to ensure their futures.

Having himself received financial support that enabled him to get an education, Atul is particularly concerned that children in Cox’s Bazar are currently not receiving the same opportunity.

“The children are facing difficulties in several aspects. One, due to the fire, they lost their playgrounds, the spaces that they were using before to play. These places are there, but they are full of ashes now. At the same time, a number of education centres got absolutely burned out,” he says.

Atul explains that even before the fire’s devastation, educational resources had been depleted, with the numbers of workers in the camps reduced to 50 per cent in order to minismise the spread of COVID-19. Deemed less necessary than medical services, educators were kept out and education centres’ doors were closed.

All of this, Atul says, means that the refugee children in the camps are missing out on the education they need to ensure their futures.

When asked what Christians can pray for to support him in his work, Atul identifies three things.

First, he asks for prayer for international donor communities and private donors that will release the funds their work depends on.

Secondly, he asks for prayer that the situation in Myanmar will be resolved, enabling the peaceful repatriation of the refugees to their homelands.

Thirdly, he asks for prayer for the team on the ground who are working relentlessly in difficult obstacle-ridden conditions.

The last Mother’s Day I celebrated with my much-loved mother was in 1991, although, of…

The last Mother’s Day I celebrated with my much-loved mother was in 1991, although, of…