Celebrating the 200th anniversary of All Saints is a complicated affair

The history of All Saints Church Jakarta is littered with uncomfortable stories, enigmatic mysteries and overlooked heroes, according to Andrew Lake, Vicar of St Augustine’s Mentone, in Melbourne.

The church – the oldest English-speaking institution in Indonesia – turns 200 this year. The milestone is being celebrated with a range of special services, a garden party and an anniversary dinner – all with open invitations to whoever would like to attend.

“As they came into the vicarage, they knifed him to death.” – Andrew Lake

Lake spent eight years as Vicar of All Saints Church Jakarta from 1996 to 2004. He uncovered many intriguing stories when he decided to write a history of the church, after his wife and four children were temporarily evacuated from the country following the 1998 riots in Jakarta.

One of the things he discovered by digging into primary source material in Singapore was the political back story to what he calls the “assassination” of Eric Constable in 1974.

“He was a recently widowed retired Anglican minister from Melbourne who had just completed a locum in Isfahan, Iran, and was doing a locum at All Saints Jakarta while CMS missionary John Brook [the then Vicar] was on leave,” Lake tells Eternity.

“Constable had only been there a few days when some well-dressed men came to the gate of the church compound and the guard let them in. They came to the door and Constable greeted them; as they came into the vicarage, they knifed him to death.”

As he relates in his book, Changes and Chances, published in 2004, it was not a case of mistaken identity or a robbery gone wrong. The attack was an Islamist plot, “but back in those days people didn’t talk about that – they didn’t understand it.” 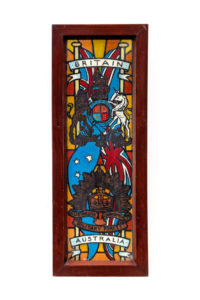 One of the stained glass windows that were originally mounted in a chapel in the POW camp in north Jakarta. They were hand made and painted by POWs.

Lake says it is a well-kept secret that there has been a religious revival in central and eastern Java since the 1960s with vast numbers of Muslims becoming Christians. He claims there are Indonesian cities in south central Java that are 40 per cent Christian.

“What happened was a fellow called Yusuf Roni, who was a high-profile Muslim, converted and he was going around Surabaya and parts of Java outside mosques trying to convert people to Christianity,” Lake explains. “There was a big reaction from the more conservative Muslim population.

“[President of Indonesia] Suharto wanted to woo the world, so he said Indonesia could host a World Council of Churches in Jakarta. This was the last straw for the Islamists.

“There was a plot hatched in Surabaya, a big city in east Java, to kill an Indonesian pastor every month until such time as the Indonesian government would not allow the World Council of Churches to have their big international meeting.

“As it was, after Constable was killed, just quietly Indonesia cancelled the meeting – and it went to Nairobi [Kenya].”

“It was definitely an act of terrorism.” – Andrew Lake

Lake says the truth about the murders of Constable and the night guard came out in 2000 with the publication of an Indonesian book called The Churches are being Burned, which was a justification for attacking churches by radical Islamists. “It had an interview with one of Constable’s killers – Hasyim Yahya – who had met Adian Husaini [the author] in Mecca and explained that it was an Islamist assassination and why it happened.

“Now, I’ve seen the telegrams between CMS Australia and the Australian embassy – and the Indonesian government line was it was a robbery. But nothing was stolen … It was definitely an act of terrorism.”

The church of All Saints in what was then called Batavia was established by the London Missionary Society as a station for chaplains to embark on missions to China and the Far East.

However, Lake made an embarrassing discovery about the church’s origins that led to its bicentenary being celebrated this year, rather than in three years’ time.

“When I dug around, I found that the church wasn’t established in 1822 as all the current material said. It started in 1819. The Englishman who started it, John Slater, the first of the London Missionary Society missionaries there, went off the rails,” he says.

The hero of our tale is Walter Medhurst, who in 1822 was sent to Batavia by the LMS to work among the Chinese. He replaced the first bamboo church on the grounds in Menteng, central Jakarta, with the current building in 1829.

“Medhurst turns up and he realised that this guy probably had psychiatric problems, so Slater was whitewashed out of history,” Lake says. “It was a family tragedy because after Slater resigned he died in Batavia, where Medhurst looked after his widow and children. Jemima Slater dying soon after and presumably the orphans were sent back to England.

“I found that out just by going into the Trinity College Library in Singapore and going through microfiche records of missionary societies – deciphering and transcribing the handwritten letters of pioneer missionaries.”

Missionaries … fight against the Opium Trade, their championing of women’s education and their medical work.

Another surprise was what an important mission station the church was. The London Missionary Society used it as the chief base of the Ultra-Ganges Mission, with responsibility for all Asian countries east of India.

“LMS missionaries like William Milne, Robert Morrison and Medhurst had a vision to go into China, but because of the Emperor’s hostility, they weren’t allowed to enter China until the Treaty of Nanjing in 1842.”

Lake is delighted that his research puts into perspective the contributions made by Medhurst and the cohort of first-generation China missionaries. These include their fight against the Opium Trade, their championing of women’s education and their medical work.

“Medhurst was a first-class linguist, and after mastering Chinese went on a voyage up and down the coast of China on an American ship distributing Christian literature.

“In 1838 he wrote a book China: Its State and Prospects, which was a major influence on the British public’s interest in China and particularly missions. It inspired Hudson Taylor and his generation.

“Walter Medhurst literally gave his life to the Chinese. His wife Eliza was remarkable too.” – Andrew Lake

“So Medhurst was a marvellous guy, but the sadness is, he worked all his life in Jakarta, or Batavia as it was then called, and then Shanghai. He only had one trip back to England to publish his book, and when he finally retired after 38 years in the Far East, he came back to England and died the next day.

“He literally gave his life to the Chinese. His wife Eliza was remarkable too. Women hardly get any credit, but she had the same fortitude, resilience, faith and nous as he did.”

For the past 50 years, All Saints’ clergy have been recruited by the Church Missionary Society of Australia with an evangelical emphasis on biblical preaching and teaching. A church plant near the International Schools in South Jakarta began in 1993. Although a relatively small church, All Saints is strongly committed to helping local churches grow through supporting many outreach programmes that promote the gospel to all Indonesians. A major part of this initiative is the scholarships which over the years have supported the training of many hundreds of Indonesian men and women for various Christian ministries.

“Since the the 1970s, the average stay of the CMS Australia clergy has been eight years, which is unprecedented for an international chaplaincy. CMS does such a good job recruiting, training and supporting people,” says Lake who, with wife Pam and four children, loved their time there.

The current vicar, Alan Wood, says several events will be held at the Menteng church to celebrate the Bicentenary. Special services will be held on February 3 – Inter-church (Christian) leaders – and February 17 – Inter-faith Leaders. The Lakes plan to go over for the main service on March 3, which will be attended by Bishop Rennis, the Anglican Bishop of Singapore, and many ambassadors, former vicars and other dignitaries.

A garden party will be held in the grounds of the church on Saturday March 9 and an anniversary dinner on April 27. There is an open invitation to these events, RSVP here for further details.