Asia Bibi was sentenced to death in 2010. Her final appeal in the Pakistani Supreme Court was heard last week.
World persecution

‘Pray for me’ pleads Asia Bibi

A Catholic Pakistani woman facing the death penalty for blasphemy against Islam is calling on the international community to pray for her release.

After spending almost a decade in jail, Aasiya Noreen – commonly known as Asia Bibi – is now anxiously waiting to hear if she will be sentenced to death after her final appeal was heard in Pakistan’s Supreme Court on Monday October 8. A decision is expected any day.

Despite increased calls from radical groups for the death penalty to be carried out, sources report that Bibi’s family remain hopeful that she will be acquitted.

“God willing it will soon be over and [Asia Bibi] will be back home with the family.” – Emmanuel Yousef

While waiting for the court’s ruling, Bibi’s family have been visiting England with support from the Catholic charity Aid to the Church in Need (ACN). Speaking on behalf of the family, Father Emmanuel Yousef from ACN, said: “Although the judges didn’t give a judgement, this has happened in many cases of this kind in the past – and they still ended positively …

“We will have to wait a few days but we are confident that things will go well … God willing it will soon be over and [Asia Bibi] will be back home with the family.”

Bibi’s husband Ashiq Masih was equally optimistic when speaking to the Catholic Herald, saying that his wife “wanted to deliver a message to the international community that they must remember her in their prayers.” He continued, “These prayers will open the door of the prison, and she will be released very soon.”

“She feels when she is praying, Jesus is encouraging and supporting her.” – Ashiq Masih

According to the Catholic Herald, Masih also said his wife was “spending her life praying with a very strong faith and is reading the Bible every day. She feels when she is praying, Jesus is encouraging and supporting her.”

As the mother of five made her final appeal in court last week, Pakistani Christians engaged in a day of fasting and prayer. Meanwhile, radical religious groups are making death threats towards the judges presiding over the case to warn them against showing leniency towards Bibi.

According to AFP, hardline Islamic party, the Tehreek-e-Labaik Pakistan (TLP), warned judges they would meet a “horrible” end if they didn’t go through with the death penalty via a press conference recorded on YouTube. The group was also calling for mass protests this week to support the stricter enforcement of Pakistan’s blasphemy laws.

Another religious group, the Red Mosque in Islamabad, is also reported to have asked the Supreme Court to rule that Bibi is not allowed to leave the country if she is acquitted.

Bibi has always maintained her innocence.

Bibi has been on death row since 2010, when she was convicted of blasphemy against Islam’s prophet Muhammad. It took four years for her appeal against this charge to be first heard by the Lahore High Court in 2014. At that time the court upheld the death sentence, but postponed her execution. Her second – much delayed – appeal this month was Bibi’s final chance to have the charge overturned. 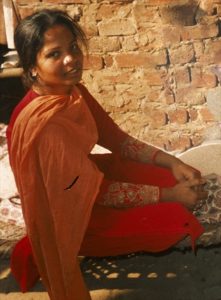 Bibi has been on death row for nine years for alleged blasphemy. World Watch Monitor

Bibi has always maintained her innocence, most definitively through her memoir, Blasphemy, which was published in 2013. In this book, she tells how she was accused of blasphemy while working in the fields picking fruit in Punjab, Pakistan’s second-largest province, in 2009. According to Bibi, her offence stemmed from simply drinking a cup of water.

A series of catastrophic events resulted. Bibi was accused of stealing the cup by a Muslim co-worker and contaminating it as an “unclean” Christian. An argument followed, during which one of the women accused Bibi of blasphemy for a comment she allegedly made about the founder of Islam, Mohammed – a charge punishable by death in Pakistan. Bibi was beaten by a mob, imprisoned and, one year later, sentenced to be hanged.

Since then tensions around the case have escalated. Bibi’s family have been forced to flee their village due to threats of violence. Two prominent public figures who came to Bibi’s defence – the Muslim governor of the Punjab Province, who supported reform to the country’s blasphemy laws, and Pakistan’s Christian Minister for Minorities – were both assassinated. In 2016, around 150 Muslim clerics from radical Islamist group Sunni Tehreek called for Bibi to be hanged.

International outcry about the case has come from the European Parliament, the EU’s Special Envoy for Freedom of Religion or Belief, and even from Pope Francis.

And now, the rest of the world is being called to urgent prayer for Bibi. Yousef told ACN: “We have prayed 10 years now for our sister, Asia, and I am confident that our prayers will be heard, and the judgement will go in favour of Asia, her family and the entire Pakistani Christian community.”

Asia Bibi, the Christian woman acquitted of blasphemy by Pakistan’s highest court, is set to…

Is she being held against her will or safely protected and awaiting asylum?