Book Review: Captains of the Soul

In 1942 the Reverend Hugh Cunningham was serving as a chaplain with the elements of the Australian Army captured with the fall of Singapore to the Japanese. He went into captivity with the rest of that unhappy band finding his way to imprisonment on the notorious Burma Railway. There he was treated extremely badly by the guards until one of them gained an inkling into his special status among the men and gave him an arm band with green Japanese characters on it. It was only after the war that Hugh Cunningham found out that they said, “Captain of the souls of men”. 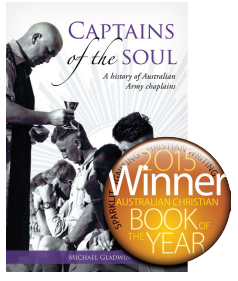 The book was commissioned and published to coincide with the formal centenary of the RAAChD on the 1st of December 2013. As such it is part of the Army History Unit’s goal of having an official history of every corps in the Army. Captains

of the Soul goes well beyond simply an official history to be a very accessible account of the courage and commitment of Australian clergy who left their parishes to bring the presence of God to men and women who had taken up the challenge of serving their country and as a result often faced, death, injury, privation, disease and all the other horrors attendant on armed conflict.

Captains of the Soul grew out of the need for the story of Australian Army Chaplaincy to be told. Army Chaplaincy was one of the few Army Corps that had not yet been covered in an official history. In addition Army Chaplaincy had only been covered in part by a few scholars and by comparison with other Army chaplaincies around the world Australian Chaplaincy had received relatively scant attention. Dr Gladwin’s approach has been to provide a complete but not unnecessarily detailed history of Australian chaplaincy from its historical antecedents up until the time of writing. Captains of the Soul is a very accessible and readable account of the story of chaplains’ ministry to soldiers as well as an acutely realised account of the historical development of the Department within the Army. Dr Gladwin’s aim was to produce a readable account of a vital but as he puts it “undeservedly obscure” ministry. He has drawn as much as possible on the reminiscences of chaplains to illustrate and enliven his account of the role of the Padre (the common title used both by officers and men of chaplains). A title that captures that the chaplain’s role is both unique and valued as Padre is generally used instead of sir as a form of address.

Dr Gladwin has succeeded in his aim as the result is a warm but not uncritical account and appraisal of an often overlooked ministry of the church. The book tells how Padres have pioneered both ecumenical and interfaith ministry and established themselves as a vital part of the life of the Australian Army. This tradition of service for God and mankind continues to this day and Captains of the Soul is a worthy testament to this vital ministry of God’s people.

Geoff Webb is Principal Anglican Chaplain in the Australian Army.