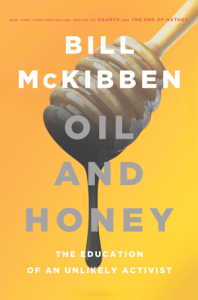 A review of Oil and Honey by Bill McKibben. Published by Black Inc, 2013.

In an early episode of the television series Mad Men (set in the 1960s), there is a scene where main character Don Draper and his family picnic in the countryside, and after their car drives away the camera deliberately pans to the picnic spot to show the rubbish they have left there fluttering in the breeze. Times have changed regarding attitudes to the environment, yet there is a certain amount of indifference out there – sales of huge four wheel drives being merely one indicator. Unlike in the past, this is not necessarily through ignorance, as we are saturated with information about what we are doing to the natural world. The pressures and pace of modern life, or perhaps simply a head-in the-sand attitude may be to blame, but there may be also a general sense of helplessness in the face of the scale of the problem.

It has slowly dawned on Bill McKibben, the environmental activist and writer, who rose to prominence with his book The End of Nature, with its thesis that there is now nowhere on earth immune from the environmental impact of human beings, that we are facing such serious environmental problems that small scale, localised action (such as those that he outlined in Deep Economy) cannot make a difference without serious political action at the international level. His new book Oil and Honey describes this realisation. As is the case on the political left, his book often falls into celebrity name dropping, false modesty and feel-good sentiments, though at least on the last two counts McKibben is questioning. He says he is naturally inclined to the writer’s hermitic lifestyle, but describes a friend taking him to task for not facing up to the challenge of being a leader. He also describes forgoing stunts for more serious political activism, and certainly if the problems are as bad as he describes, then amongst concerned people of all persuasions there must be a questioning of what is action and what is simply gesture.

Climate change is McKibben’s key issue, and the culprit is the fossil fuel industry. Oil and Honey is a study in contrasts: the mad greed of the oil industry, and the efforts of his beekeeper friend, who has managed to create a profitable, sustainable business without chemicals. In the process the beekeeper has created a counter-cultural lifestyle, living by the seasons rather than the endless upward projections of big business.

McKibben makes the contrast but he also suggests that corporations are much like bees, being automatons, only capable of doing one thing, in the case of corporations, making money. This perhaps plays down the role of board members who, theoretically at least, can make moral choices, even if making money seems to be often the only motivation. And indeed McKibben gives plenty of evidence that the fossil fuel industry is making piles of money against all common sense. He suggests that it is not protestors but fossil fuel industry executives who are the real radicals. McKibben offers the sobering statistic that if all the oil in current reserves is burnt, we will pump into the atmosphere five times the amount of carbon than current (conservative) estimates set as the limit for global carbon emissions, after which catastrophe threatens. And this is without all the new oil fields that the industry is furiously pushing to tap.

McKibben also details the vast amounts of oil money tied up in US politics. Quite simply, the US political system is under the thumb of big oil, if not actually part of it, as is the case with the Bush family. Only the most naïve would believe the oil barons didn’t expect something in return for their large political donations. McKibben describes an industry hell-bent on global destruction for profit, and only politics on a global scale will stop it.

McKibben may be optimistic, but it is easy to be pessimistic. One of the problems with campaigning against such global might is that its opposition is naturally inclined to grass-roots, local solutions. McKibben has championed the value of the small-scale (“not too-big-to-fail”) and the community-based, with which Christians can agree. Indeed, McKibben clearly takes some of his campaigning drive from his Christian faith. But as with the slave trade, individual moral outrage must combine with action at the legislative level. And amongst other things, his book details the difficulties of gathering enough momentum to break through into the corridors of power.

It is not as if McKibben is arguing for some sort of return to the Stone Age. Opponents of environmental activism regularly make this charge, which is the equivalent of the gambling industry deliberately overreacting to anti-gambling campaigners, labelling them as puritans who want to ruin everyone’s fun. McKibben is simply arguing for healthy ways of doing things, in the face of mounting evidence of sickness.

There are large moral questions about the burning of fossil fuel (as fast as possible), many of which lie beyond McKibben’s book. He focuses on the fast approaching results of climate change (and perhaps those results, such as Hurricane Sandy, already afflicting us), but there is the issue of whether we have the right to use these non-renewable resources in a fit of indulgence, as well as the legacy we leave our children and grandchildren. “Leave the land better than you found it”, McKibben quotes a farmer friend. Christianity has a long history of sound environmental thinking and it is called stewardship. Unfortunately, there is also a long history of the source of this notion, the book of Genesis, being taken to mean that the gift we are given (the world) is therefore ours to treat as we please.

In the end, climate change denial is not about science, but about legitimising human behaviour. Supposedly, if climate change is not caused by human beings, then we are free to continue on our merry way. It has been somewhat to the detriment of environmentalism that it has been so focused (as McKibben is) on climate change, because the question of the legitimacy of the science has given an excuse to those who want to avoid stewardship. But we don’t have to look very far beyond climate change to see evidence of a lack of stewardship: mass extinction, monocultural agribusiness, habitat destruction, the proliferation and side-effects of chemicals, overcrowding, overfishing, air pollution, degraded soil and water quality, sprawling rubbish dumps, and so on. We cannot shrug our shoulders at these problems as the inevitable results of God giving us the world. It is healthy to think of the world as a gift, but not as one we can use up and drive away from, leaving our mess behind.

Nick Mattiske works in publishing and blogs at Coburg Review of Books.

This year’s scorecard on Aussie brands

Let’s be clear: With the bushfires currently raging across the Australian landscape, we are facing…

The science, politics and theology

But there is hope to turn things around

ABC Television’s The Book Club will air its final show tonight, after more than a decade…

A scientist and Anglican minister on reasonable expectations