Jesus-shaped and stronger: review of Resilient 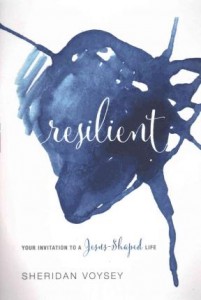 A review of Resilient by Sheridan Voysey (Discovery House, 2015)

For several years, I did book reviews for a national radio program. The program’s announcer would prepare for the review discussion by calling me a week beforehand and talking about the relevant book. He would work out what interested him, and formulate the questions.

I loved those discussions. He was an intelligent and compassionate interviewer, and he always drew more out of me than I knew was either in me, or the book I was reviewing!

That radio announcer was Sheridan Voysey, who later left the radio program to head on an adventure overseas. It was a difficult transition for him: to give up his dream job to make a new start with his wife as part of a journey toward healing over their broken hopes of becoming parents.

One thing Sheridan decided to do to help with his fresh start, was to read Jesus’ Sermon on the Mount every day for a month. He found it so enthralling and enriching he kept going for a second month, then a third.

As he researched and journaled his discoveries, a theme emerged: Jesus was describing the good life, the resilient life, a life shaped like Jesus’ own life.

The result is the book Resilient: 90 devotions including stories, observations, Bible quotes and questions to help the reader recalibrate their calling, relationships, life practices and choices.

Sheridan describes a Jesus-shaped life as having a heart for God, with a high calling, to be a friend of sinners, living for an audience of One, with a heart of courage, and worshipping the God of surprises.

I came to this book experiencing my own broken dreams, and slightly cynical about yet another treatment of Jesus’ most famous words. I should have expected more from Sheridan. There is much wisdom in these devotions, and some great quotes, and tasty food to nourish the soul.

While Sheridan focuses on the core of Jesus’ message, embedded in thoughtful scholarship, it is the stories illustrating, and the quotes enhancing, which help these familiar words to unfurl in new ways.

For example, did you know that Hollywood started out as a Christian utopia in the 1880s? Daeida Wilcox tried to create a community that was a taste of God’s kingdom on earth, free of alcohol, guns, speeding and bowling alleys. However, in spite of her wishes, saloons started opening up, and in 1910 the first movie was made, the seed for the most influential movie industry in history.

Sheridan uses this story to illustrate that “sin, suffering, and corruption interfere with every effort” to build the kingdom of God. That instead, “God’s kingdom starts with his reign in our hearts, then ripples out into society. And it comes by God’s command and not by human effort alone.”
Each of the devotions build on the ones before, such that he can summarise the learning towards the end:

There are some profound moments in this book, such as the idea of looking beyond the cross to the resurrection for hope during life’s storms. Or the way Sheridan reinforces that Jesus practised what he preached: “never ogling with his eyes or dehumanising with his words, never lashing out or striking back, never making a promise he didn’t keep, loving those who hammered nails into his hands, forgiving those who struck his cheek.”

Sheridan points out that a resilient life calls for both holiness and mercy.

This is an engrossing but also a challenging read. I can imagine it would richly repay three months of daily devotion, with careful reading of the biblical references, consideration of Sheridan’s elaboration, and a thoughtful response to the questions.

Perhaps Sheridan’s greatest gift through this book is a reminder of how well God knows us:

He knows you. He knows every detail and nanosecond of your existence – every atom, molecule, skin cell, and ligament; every hope, dream, interest, and achievement; every strength, weakness, gladness, and grief. He knows you intimately, through and through.

And, he loves us, as perfectly demonstrated through Jesus’ life, death and resurrection.

Kara Martin is the Associate Dean of the Marketplace Institute, Ridley College, Melbourne, and regular book reviewer for Eternity. She is an avid reader and book group attendee.