Life in Tanzania: Learning and legacy

Tamie Davis, originally from Adelaide, works with CMS Australia and blogs at meetjesusatuni.com. In this series, she reflects on her family’s first year in Dodoma, Tanzania. 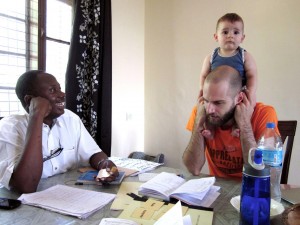 I come out of the kitchen to greet our guest. He’s come to visit his friend who is staying with us. He’s a big guy, perhaps 50, dressed in smart slacks and a Tommy Hilfiger shirt. He asks what we are doing in Tanzania and we tell him that we have come to work with university students but that for the past year we have been learning Swahili and Tanzanian culture. A look crosses his face – surprise? scorn? – and he says, ‘You have been here for nearly a year? When will you stop learning Swahili and start doing something?’

I am a little taken aback. Such forthrightness is not typical of Tanzanians. I try to explain that we are keen to learn well so that we can serve better as time goes on, rather than coming in presuming that we know what Tanzanians need. “No one is perfect”, he scoffs. “Just do something and you can apologise later.” I invite him to stay for breakfast; he says he only came to greet his friend, but I insist and after correcting my Swahili (I used a slang word for ‘insist’, rather than a formal word) he accepts.

Like many pastors, he wears several different hats, so he runs a publishing house as well as taking care of a parish and doing some itinerant work. He tells us about a church he’s working with who want a new building but didn’t collect sand for the bricks when he told them to. He says when missionaries came, people got used to having everything handed to them rather than working for it. He says it created a culture of dependence. He speaks of bribery, even among Christians, and attributes this again to missionaries. He says, the evangelists only cared about getting people into heaven, but what does God have to say about your life now?

He turns to my husband Arthur and to me and looks us straight in the eyes. “The missionaries did this,” he says. “Australian missionaries, even from CMS.” It’s not for us to assess the accuracy or fairness of his statement, though the next day his friend, our guest, gives a much more positive accounting of the missionary legacy. Either way, we’re painfully aware that missionary history is mixed. I look straight back at him and say, “This is why we are not doing anything yet. We do not want to make mistakes like that.” He laughs, a big booming rumble, and says, “Very good.”

We thank him for his frankness and Arthur adds, “You know the issues you speak about are issues in Australia too.” Arthur explains that though it manifests differently, Australian uni students struggle to come to terms with the sacred/secular divide. We recount a conversation with one student who had been told that continuing her medical degree was only of temporary value but if she wanted to be part of God’s work in the world, she should go into ministry. Our friend replied that doctors do God’s work by caring for people, and we begin to swap ideas about how to bridge the divide.

This is our daily experience. We have not come to Tanzania only to teach, but also to share, to learn, and we hope, to be transformed by God’s people in Tanzania. Our task is to do a little to strengthen the Tanzanian church; our hope is that we will gain much that will enrich the Australian church as well.