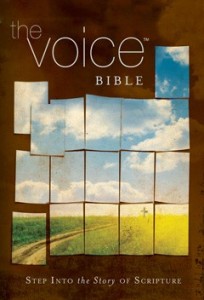 In July this year, the publisher Thomas Nelson released a new Bible translation, The Voice. Despite its name and the timing of its release, it does not relate in any way to the popular TV show The Voice; rather, the title refers to the reality that God has and does speak to people through his Word, the Bible

More than 120 scholars, authors and artists contributed to the dynamic equivalent translation, including Tremper Longman and Darrell Bock. The translation is unique in that it results from a collaboration between scholars, pastors, authors, poets, musicians, and other artists. The team strove to translate each word of Scripture into a story that is faithful to the original text, easier to understand today, and yet conveys the beauty and timelessness of Scripture.

The heart behind the translation is to present Scripture “not as an academic document, but as an engaging story.” The team behind it intend it to be for a “generation of story lovers to step into the Bible through a fresh expression of its timeless narrative. It recaptures the passion, grit, humour, and beauty that is often lost in the translation process.”

Some popular verses as they appear in The Voice translation:

John 3:16-17 “For God expressed his love for the world in this way: He gave His only Son so that whoever believes in Him will not face everlasting destruction, but will have everlasting life. Here’s the point. God didn’t send His Son into the world to judge it; instead, He is here to rescue a world headed toward certain destruction.”

Romans 3:21-24 “But now for the good news: God’s restorative justice has entered the world, independent of the law. Both the law and the prophets told us this day would come. This redeeming justices comes through the faithfulness of Jesus, the Anointed One, the Liberating King, who makes salvation a reality for all who believe – without the slightest partiality. You see, all have sinned, and all their futile attempts to reach God in His glory fail. Yet they are now saved and set right by His free gift of grace through the redemption available only in Jesus the Anointed.”

The following is an interview with Dr. David Capes, Thomas Nelson research professor at Houston Baptist University, and lead scholar on The Voice, released by the publishers.

1. Why do we need another Bible translation?
The Bible is the most owned and least read book in history. The reason is simple: the Bible is a difficult book to understand and stay with because it comes to us from a very different time and culture. The Voice was created by more than 120 scholars, editors, writers, and poets to help bridge the gap between then and now. We did this translation initially to help first-time Bible readers step into the story of Scripture, but we often hear that veteran Bible readers are sensing God speaking to them in fresh, new ways through The Voice.

2. What’s the most significant way that The Voice differs from other translations?
Two things come to mind. First, The Voice came about through a very different translation process. While most modern translations involve only a team of scholars, we invited poets, writers, and musicians to work alongside scholars to rediscover the beauty, grit, and humor in the Scripture. Scholars, you see, are skilled at the technical aspects of language and translation; but they are not necessarily good at telling a story or sensing the meter within a poem. Since so much of the Bible is poetry and story, it made sense to bring literary artists into the conversation.

Second, the Bible is essentially a great story of love and redemption. Unfortunately, many modern translations are rendered and formatted in such a way that it makes it difficult for the reader to enter into that story. Rather than getting lost in the story, the story itself is lost. The Voice is translated and formatted so that readers can see the big picture—what scholars call the “meta-narrative”—and step into the story for themselves.

3. You’ve already made headlines for omitting the words “Christ,” “apostle,” and “angel” from The Voice. Why did you leave out those words?
I’d say we didn’t omit these words; we translated them. For the first time in the history of the English Bible, a major translation tells us what these words mean.

The word “Christ” is not found in the translation because “Christ” is not a translation at all; it is a transliteration of the Greek word Christos (which means “anointed one”). We translated every occurrence of Christos as “the Anointed” or “the Anointed One.” The translation team did this to clear up a fundamental misunderstanding. Most in the Bible-reading public take the phrase “Jesus Christ” as his name: “Jesus,” his first name and “Christ” his last name. In fact, “Christ” is an honorific title like “Son of God, “Lord,” and “Savior.” Our translation decision was intentional: we hoped to recover the honor associated with the title. Essentially, “Jesus Christos” is a bold claim by believers that Jesus is God’s agent, descended from David’s royal line, who is chosen (“anointed”) and destined to liberate the cosmos from sin, death, oppression, and corruption. We also translated other key terms which happen to be transliterations in all English Bible editions. For example:
•“apostle” (Greek, apostolos) = “emissary”
•“baptism” (Greek, baptisma) = “washing”
•“angel” (Greek, angelos) = “heavenly messenger”

4. Why is dialogue in The Voice presented in screenplay format?

5. How did the fact that the Bible is a library of books and not one homogenous whole inform your approach to this translation?
The Bible is not a single book but a collection of 66 books written by different people. Although each book bears witness to the great story of love and redemption, no one writer tells the entire story. The story comes to us through a plurality of voices, people who occupied very different stations in life. They were kings, shepherds, agricultural workers, fishermen, and common laborers, just to name a few.

We noticed that in most translations all the voices sound the same. In other words, Mark reads like Matthew, Matthew reads like Luke, Luke reads like John. But in fact, in their original contexts, each of these books has a different tone, a different audience, and a different of set of interests. Modernity, it seems, has privileged homogeneity. In The Voice we wanted to hear again the voices of the different writers, so we made certain decisions and set up a translation process to help us do just that. People tell us that when they read the various books, they sense that Paul or Peter or Amos is addressing them.

6.Why is it called The Voice?
At the heart of the Christian faith is the conviction that God is and has been speaking. He speaks creation into existence. He speaks to Abraham and creates his covenant people, Israel. He speaks through the prophets. He speaks, finally and decisively, through Jesus his Son. Ultimately, in the Scriptures we sense God speaking to us. The title The Voice echoes this sense.

7. The translation team included artists as well as scholars. What did the artists bring to the project?
Artists, writers, and poets have been central to The Voice project from the very beginning. They tend to see the world in ways different than scholars who are at home most when negotiating through the complexities of languages and lexicons. Artists feel things at a deeper level. Their creativity and intuitions about language are often more in tune with readers. They sense the cadence of prose and the beauty in poetry in ways scholars often do not. Artists understand at a fundamental level that what words “do” is just as important as what they “mean.” While scholars can help us get the words right, artists are best equipped to help us get the story right. This is why the collaboration between artists and scholars has been so crucial to creating The Voice.

I’ve thought about it this way. Scholars tend to make greater use of the left-brain, artists more the right-brain. The Voice is a Bible for both sides of your brain!

Raju’s story | Getting older yet still wanting to serve

Raju’s story | Getting older yet still wanting to serve

The pace of Bible translation is increasing. Bible Societies have completed Scripture translations for more…

Good progress made in translating the Good News

Bad news: there are 3773 languages to go

In the midst of the COVID-19 pandemic, a missionary in South East Asia is finding…

A change in the wording of the Italian Lord’s Prayer, approved earlier this month by…