The Tightrope Walker—review of America’s Pastor: Billy Graham and the Shaping of a Nation 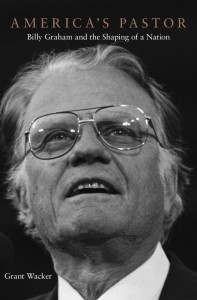 A review of America’s Pastor: Billy Graham and the Shaping of a Nation by Grant Wacker. (Harvard University Press, 2014)

If you look at YouTube clips of Billy Graham preaching, you notice—despite the raised voice—firmness, a comforting rhythm, dignity, and always a sense of control. Part of his appeal must surely be, despite the message that America (and the world) is off the rails, that he projects an image of stability in the midst of the turmoil of the modern world. Grant Wacker’s book, which is less of a biography and more of an attempt to understand what societal hole Graham plugs, sees Graham’s appeal in being able to simultaneously use and confront the prevailing culture, but it perhaps also lies in his ability to, paradoxically, offer comfort while calling for life-changing repentance. And although he strode the world stage, there is something fundamentally American about his way of confronting the sin of America.

Graham was born in, and lived most of his life in North Carolina, at least when he wasn’t travelling. (It is claimed that in his heyday he was one of the most travelled people in the world.) He says he went through the kind of life-changing decision he asked for in his crusades (though Wacker says that there was “not much to be converted from”), and felt an early calling to preach. He was ordained a southern Baptist, and received a basic education from Wheaton College, Chicago (interestingly enough, considering Graham’s position in American life, the school had an emphasis on sociology), but he was not and never claimed to be a theologian. His calling was as an evangelist. And he was never, despite the book’s title, a pastor or minister to a congregation, except in an informal sense.

Reinhold Niebuhr turns up at various points in Wacker’s book as a kind of Christian nemesis to Graham, and Niebuhr represents the kind of intellectual Graham wasn’t—standing at the sidelines and thinking in sophisticated fashion. Graham, in contrast, stepped right into the middle of it all with one answer, which tended to create wariness in theologians, although they too, like German theologian Helmut Thielicke, could be won over by Graham’s charm, and emphasis on the Gospel.

For Graham, things were pretty simple. He emphasised the individual and their need for a personal decision to repent. Wacker writes that the “big sin” for Graham was drifting. On the other hand, Graham was vague on the idea of church. Church was secondary to the individual relationship with Jesus. But Graham would argue that his primary mission was as an evangelist—his job was to get the individual to turn to Christ—and the rest was up to others. In the experience of many in his audience, church life is undoubtedly messy, but the Christian life starts with one simple act.

Graham was keen to distinguish between private and public, which illuminates his relationship with US presidents. Wacker decides there is no evidence that Graham ever influenced a president’s policy decision, but Graham would argue that his relationship was with the private person, not the government official. Sounds good in theory, but Graham did get into trouble over the years by blurring the line, especially when it came to Richard Nixon, who he all but officially endorsed, all the while saying he never did such a partisan thing. His relationship with Nixon, who clearly put one over Graham, burned him, and Graham was further criticised because he seemed more scandalised by Nixon’s bad language than the gravity of his political crimes. Considering his emphasis on individual morality, perhaps this is unsurprising. There is also within Graham’s relationship to presidents a tendency to avoid offence. Graham excused himself by saying he was not a public official, but on a shallower level, he was something of a namedropper, and liked to hobnob with the rich and powerful.

His reluctance to offend presidents also has a lot to do with his aim to position himself in the mainstream. His audience was largely what Nixon famously named the “silent majority”. Indeed, Wacker credits Graham for bringing evangelicalism into the mainstream, so much so that, says Wacker, one wag’s definition of an evangelical is “someone who likes Billy Graham”. He positioned himself between the liberals and the fundamentalists, by focusing on—again—the individual’s need for repentance, and lessening finer points of doctrine or complex social issues.

He did of course criticise American immorality, but part of his appeal was that he could criticise America using American ideals. He did comment on major social issues, such as race relations and the nuclear arms race, but did not criticise bias at a fundamental level, or a deeply-rooted belligerent attitude. Wacker notes that Graham indicated to his predominantly middle class audience that they could be “good Christians” and “good Americans”. Graham would be the first to point out that sin lies at our core, but he implied that America’s woes stemmed not from a rotten core, but from a deviation from its Christian core. His ministry reinforces historian Garry Wills’ insight that Americans resolutely believe that their society is, at base, an equitable one and that people need only make the decision to better themselves (something Wills shows to be a dubious proposition). Graham indicates a willingness to believe that a decision for Christ will solve everything. On one level this is true—no-one is immune to God’s love—but his message also fitted snugly with the individualistic American vision.

While he had a golden tongue, he also had sensitive ears that were attuned to the voices of the prevailing culture. He walked a tightrope, and like a tightrope walker, his skill made it look easy. Wacker notes the way he could banter with a comedian such as Woody Allen, relaxed and humorous but always circling back to his message of the Gospel. Similarly, his message always paired prophetic denouncement with optimism, “dark clouds overhead … with blue skies beyond”, according to Wacker.

Graham’s autobiographical works could seem “fluff” and “self-serving” to critics, but to his faithful readers they offered sensible, simple advice. This is how he could find a comfy place in the battlefield of church and state. America’s people focus politically on one person—the president—and similarly, one can see the appeal of one person to represent the spiritual side of the nation. Americans wanted a chaplain as well as a president and since presidents could come and go the stability of Graham’s position was reassuring during the craziness of the twentieth century. And there is something about Graham’s position that gels with the “tipping point” idea. Once in the public mind Graham had fixed himself as a rock in a turbulent world, that very image helped keep him there.

It is also crucial to Graham’s ministry that he seemed genuine (although his detractors sometimes accused him of phoniness). Like Ronald Reagan, who many Americans also saw as a rock, some of his ideas may have seemed simplistic, but
Graham believed them. And he believed in the things he said because he believed God said them. In his interview with Woody Allen, for example, he points out that a prohibition on premarital sex is not just Graham’s view, but the Bible’s. For Graham, that was end of story.

This did become problematic when Graham changed his mind about various things, which he did over time, such as the Vietnam War. Did God change his mind also? If Graham changed his mind, could some of the things he attributed to God be up for contention? He was an easy target for such attacks, but he consistently deflected the bullets, often with humble apologies. It didn’t seem to dent his authoritative image. And Americans like authority, despite all the talk of freedom, if it is to their good. Graham was a savvy projector of his image, but that image was simply trustworthy, which is why presidents consistently sought his approval, and why so many Americans listened when he spoke.