News comes of hundreds killed and thousands injured in Cairo overnight as tension increased between Islamists, supporting deposed President Morsi, and the Church in Egypt.

Bishop Mouneer Anis, from the Anglican Diocese of Egypt told supporters yesterday that the St Saviour’s Anglican Church in Suez is “under heavy attack from those who support former President Morsi.”

“They are throwing stones and Molotov cocktails at the church and have destroyed the car of the Rev. Ehab Ayoub, the priest-in-charge of St. Saviour’s Church,” writes the Bishop.

“I am also aware that there are attacks on other Orthodox churches in Menyia and Suhag in Upper Egypt (see photo), as well as a Catholic church in Suez. Some police stations are also under attack in different parts of Egypt. Please pray and ask others to pray for this inflammable situation in Egypt.” 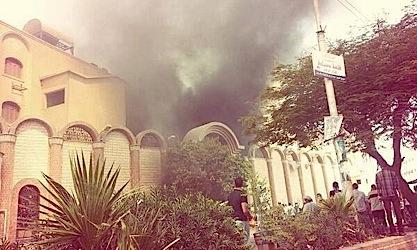 Orthodox Church in Suhag under attack.

The Revd Ehab Ayoub told the Anglican Communion News Service that he and his family were trapped in St Saviour’s Church in Suez for hours while pro-Morsi supporters attacked the building.

“Eventually, the army came with tanks and personnel and after a long morning, the family are now out of the church and in a safe place,” he said.

Bible Society in Egypt has also reported attacks on two of its bookshops in Assiut and Minia, as well as 15 churches and three Christian schools that they know of. The bookshops were set on fire and completely destroyed. “Fortunately we were closed today, fearing such an attack, so none of our staff were injured,” said Bible Society Egypt’s General Director Ramez Atallah, in an email to supporters. “It is important to underline that—while some Christian properties have been the victim of this violence—they are by no means the only ones targeted. This is an attack against the State by a violent minority in an attempt to destabilize the Nation.” Violence has been escalating in Cairo and other areas of Egypt since President Mohamed Morsi was ousted in early July this year. At that time, Bishop Anis released a statement, saying when President Morsi was installed as leader “many had hoped that Egypt would move forward for the better however things became worse and are now very difficult. Egyptians became divided between Islamists and non-Islamists.”

“They are throwing stones and Molotov cocktails at the church…”

Overnight, Egypt’s security forces stormed Islamist protestors supporting President Morsi, with reports around the world suggesting more than 200 protestors were killed. Yesterday, the Sydney Morning Herald reported the death of a 10-year-old Christian girl shot dead in the street as she walked home from Bible class at the Ahmed Esmat Street Evangelical Church.

The increasing attacks on Christians and other religious minorities in Egypt is causing concern across the international community.

General Bishop of The Coptic Orthodox Church in the United Kingdom, Bishop Angaelos said in a statement earlier this month, “At a time where attempts are being made to move Egypt into a more unified state, and where there is opportunity for collaboration and reconciliation, we are instead witnessing, once again, a polarised society in which unprecedented acts against Egyptian Christians are being carried out without fear of reprisal… These acts and threats all contribute to a very real risk upon the life of every Christian, especially in the increasingly polarised and inflamed climate in Egypt.” Remnants of Bibles and Scripture materials from the Bible Society’s bookshops in Egypt.

The Bishop of Egypt is calling for Christians around the world to pray: “Please pray that the situation will calm down, for wisdom and tact for the police and the army, for the safety of all churches and congregations, and that all in Egypt would be safe.”

Bible Society in Egypt has asked for prayer: