The best book on Australian Christianity and the Aboriginal people is available again, now in e-book format.

Dr John Harris’ landmark book One Blood has been out of print and unavailable for some years. Yet there has been continuing demand for the book; indeed, Tim Costello, CEO of World Vision Australia, recommends “every Australian Christian should read One Blood”.

“Many people, both Christian and non-Christian, learned of the tragic history of Aboriginal Australia through reading One Blood, the history none of us were taught in school.” — John Harris

The book studies 200 years of Aboriginal encounters with Christianity, and discusses the impact of European missionaries on Aboriginal culture.

When Dr Harris set out to write the book, he did so to tell a story. “I wanted to write the warts-and-all story of the Christian missions in Aboriginal Australia.” 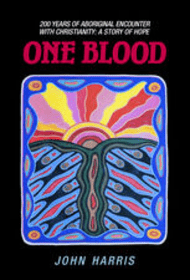 Harris has always known Aboriginal people as friends, from the time he was born. For many years he gathered accounts of mission life from them and from missionaries. For about 20 years he read thousands of diaries, newspapers, reports and mission magazines. He knew that, “here was a big story made up of many smaller stories, stories both happy and sad, stories of success and tragedy, of death and life.”

“I simply wanted to tell the story using the words of the people who were involved, those who knew what happened.”

Harris says he wrote the book for the Church. “I thought I was writing it for other Christians, to help them understand the Aboriginal Christian past. I wanted to set down the facts, not just in my own words, but by the use of a huge range of original sources.”

The book’s reception exceeded all Harris’ expectations. It became far more than the story of the missions. It turned out to be the story of what happened to Aboriginal people, in their own words and in the words of those who knew them best and lived among them.

“Many people, both Christian and non-Christian, learned of the tragic history of Aboriginal Australia through reading One Blood, the history none of us were taught in school,” says Harris. “It prompted churches and Christian organisations to make their apologies to Aboriginal people long before Kevin Rudd did. And it had important influences in the secular world as well. Sir Ronald Wilson read One Blood and because of it, he agreed to chair the National Enquiry into the ‘Stolen Generations’.”

Despite the influence of the book, its out-of-print status, and the continued demand for it, Harris was pleasantly surprised to be approached by Concordia with an offer to sponsor a digital edition. The e-book of the second edition of One Blood  has now been published and made available on Amazon and the iTunes.

“The content remains virtually the same apart from a very few minor corrections,” says Harris, who was key in the process of converting the book into a digital edition. “It is a very big challenge to convert a large academic book from the original printed hard copy into an e-book. Fortunately, all the crucial footnotes and references remain: all 2,609 of them.”

Harris is aware of the need for a new revised edition of the book, to include all that has occurred since the second edition was written in 1993. “Many things have happened in the past 20 years including the Bringing Them Home report, Kevin Rudd’s apology and the canonisation of Saint Mary MacKillop.  Many things have happened in the churches too.”

“This is a somewhat daunting but exciting task which I hope to be able to complete. I pray that God will give me the life and strength to complete the third edition but we cannot know what life will bring.”

Harris concludes, “This digital edition will reach a new generation of readers. It is my prayer that you will learn from it and that it will challenge and enlarge your thinking.”