Kevin Smith passed away recently, in Perth, at the age of 75, after a long illness. He was a champion in the Jesus Movement in the 1970s and 80s.

He was a visionary, an innovator, and a revolutionary. He was passionate about following Jesus and about helping the Jesus Movement express a united voice.

I first met Kevin when he was working with Melbourne City Mission in Brunswick, Victoria. I was in my mid teens and remember liking this larger than life character as he made me feel significant.

Another friend of Kevin’s, Alan Marr, recently told me that when he first met Kevin he thought he was ‘cool and out there’, someone he always wanted to be like.

My friend Peter and I would visit him in Brunswick and help him with whatever he was doing at the time. He would take us out for lunch (a meat pie and a milk shake at the Milk Bar) and chat to us about how relevant Jesus was to our generation. It was one of the seeds planted in my life that later flourished through the Jesus Movement.

A who’s who of Christian radicals in the ’70s

Kevin founded On Being magazine, one of the most important elements of the Jesus Movement in those days. Writing on her blog, Jenny Baxter tells of how she and her husband Stephen linked up with On Being and became a proofreader (Jenny) and graphic designer (Stephen). She states that they felt it a privilege to be involved in this ‘exciting venture in inner-city Melbourne’.

Jenny gives credit to Kevin (along with others who teamed up with him) in starting On Being, calling them ‘trailblazers of Australian Christian Media in the 1970s’ … and that they were. 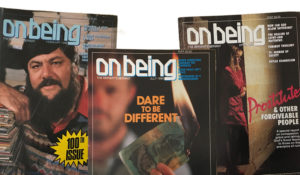 Reading through the names of the people who were a part of the team that Kevin was able to bring together is like reading a who’s who of Christian radicals in the ’70s… David Boan, Marcus Breen, Richard Horne, Owen Salter just to mention a few.

It was a labour of love for Kevin and for the many others involved in this ‘periodically inspired’ (usually monthly) magazine. It distributed news, teaching, promos and encouragement, long before the days of social media, to a growing movement across Australia of (mostly) young people radically following Jesus.

One of the great dangers of the Jesus Movement was fragmentation and empire building, the very things we preached against. It was never an organised movement but one that arose spontaneously around the world, led by the Spirit of God, with passion and commitment. It was truly awesome to be a part of it.

But we could easily become fragmented if we didn’t know of one another and we could be caught up in egotistical empire building because this was so awesome. There were a few highly passionate leaders arising who would lead people into their own Empires. Some of the world’s best-known sects, such as the Children of God, grew out of the Jesus Movement.

Over 50 plus years, he threw himself into enterprises that sought to engage the public and the church in the gospel

On Being helped to address these dangers in Australia and was mostly successful. It wasn’t the only unifying factor that God used. There was The Master’s Workshop and Theos Sun, both connected to Scripture Union; there were the Annual ‘Happenings’ at Belgrave Heights; and the deep relationships between most of the leaders across the Movement … and On Being, ably led by Kevin Smith, helping to cement it all.

Kevin was involved with a number of Christian organisations including Campaigners for Christ and Scripture Union. Marcus Breen, one of the early writers for On Being put it well: “Over 50 plus years, he threw himself into enterprises that sought to engage the public and the church in the gospel that he believed needed to be more in line with the humility and social action that was exemplified by Jesus Christ.”

“He was a keen New Testament advocate – a non-conformist who never gave up his commitment to the Christian love and support he experienced largely through my parents (Myrtle and Stewart Breen) and the network of friends he made in Melbourne’s suburbs.

“In the mid-1970s he was a pastor at a Baptist Church in Hawthorn, Melbourne, working with Richard Horne, to remake the church as an outward vehicle for a kind of care that was practical while fully informed by the Gospel.”

The Church Marcus refers to was Hawthorn West Baptist. Kevin helped it to become a faith community that was characterised by much of what we, as Jesus People, emphasised. It was innovative, even within the Movement, as it took on an existing Church structure and revolutionised it.

Most of us moved out of the traditional structures and started new ones (some of which still remain today) but Kevin stayed on the inside and became an internal force for change.

In a piece on Kevin’s life by Wayne Jacobsen he says: “Even how I travel now is the fruit of our relationship. I know that what people need to see to catch this life for themselves is not a speaker on a stage talking about the love of God, but an example in their homes and over meals of our common humanity and the amazing Father that can make sense of our lives.”

“I know that frivolous moments of laughter or making buttermilk biscuits are every bit as significant as the deep conversations. That’s what Kevin showed me and I still treasure every moment we’ve had together.”

This generation needs more leaders like Kevin Smith … an innovator, passionate for Jesus, helping ‘little people’ feel OK about themselves, and willing to do the hard yards, staying faithful to the end. Vale Kevin Smith.

Correction. An earlier version of the story described Smith as a CEO of Urban Seed. That was a mistake by Eternity. David Wilson is a former CEO of Urban seed.