As the debate goes on, these Aussie yogis are going global

The “studio” is set: a white-walled hall, yoga mats rolled out on the floor and two picture-perfect instructors. Josephine Lau and Alyssa Mak from Grace x Strength are not just yoga instructors, they are seasoned performers. As they execute a routine, specially designed for Eternity’s video camera, they manage to keep a smile, despite the physical intensity of the poses.

But these instructors have another, more significant point of difference. Sweeping her arms overhead in a perfect arc, Mak introduces “mountain pose” to an imaginary viewer by reciting: “Bringing our gaze heavenward, we are reminded to fix our gaze on Jesus. For where our treasure is, there our heart will also be.”

“We want to create a space for people to really chew on God’s word.” – Alyssa Mak.

This is not a mantra you expect to hear in a yoga class, and it sums up the Grace x Strength difference – their classes are designed to encourage participants to “fix their gaze on Jesus”. It’s yoga outreach.

While the movements are the same as traditional yoga, the classes start with a Bible reading and incorporate Bible verses throughout. “We want to create a space for people to really chew on God’s word,” says Mak.

Since Lau and Mak formed Grace x Strength one year ago, they have filmed around 65 yoga classes, along with another four instructors on their team. A handful of these video classes are available on their website, but over the past two months they have ramped up production to coincide with a successful crowdfunding campaign.

Having raised almost $12,000, Jo and Alyssa will launch a new Christian yoga channel on 1 November and make their classes readily accessible worldwide.

Grace x Strength already has a healthy social media following, as well as 250 subscribers to their classes. The new yoga channel will feature a greater range of instructors and classes – including classes in Cantonese and Mandarin, pre and post-natal classes, chair yoga and trauma sensitive yoga.

In addition to the online classes, regular face-to-face classes and workshops will continue. Grace x Strength hopes to branch out across the world as the number of Christian yoga instructors in its network increases. According to Lau, these personal interactions are vital in building community, forming relationships and, hopefully, spreading the gospel.

Lau has become somewhat of a “Christian yoga poster girl” during the past few years, as awareness about this practice grows. Completing her training with the US-based Holy Yoga in 2015, Lau began running Christian yoga classes and serving as Holy Yoga’s regional director in Australia.

At that time, Lau believes she was one of only four Christian yoga teachers in Australia. She is now working on growing this number, and is discussing bringing Holy Yoga’s training to Australia.

“Jesus himself faced persecution from his own.” – Josephine Lau 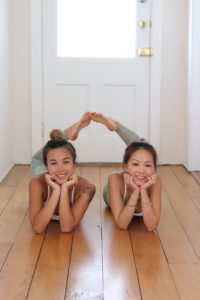 But not everyone supports the idea of Christian yoga. Lau admits to receiving negative comments every day, via social media or other communication.

“It comes from all angles, but mainly from Christians who disagree, and also non-Christians who think that Christians redeem everything under the name of Jesus,” Lau explains.

“Sometimes you feel like you are in no-man’s-land – you just can’t win. Yet Jesus himself faced persecution from his own. It gives me a taste of what it’s really like to walk the walk of Jesus. On bad days, I treat it as persecution. On good days, I treat it as a blessing. You get to experience what it was like to be persecuted and to stand for the name of God.”

In 2016, Lau was interviewed and filmed for a Sydney Morning Herald article, which drew attention to some of the criticism levelled at Christian yoga – mainly that it has “racist undertones” by appropriating the practice and divorcing it from Eastern religions. Holy Yoga itself, which has trained more than 1200 instructors worldwide, has also come under fire for offending the Hindu community.

But Lau and Mak argue that yoga pre-dates Eastern religions and can be appropriated by anyone  – a view backed in the Herald article by Yoga Australia’s chief executive.

“For us, it’s absolutely not worshipping an idol.” – Josephine Lau

This argument also serves them when responding to criticism from Christians that they are worshipping other gods through particular yoga poses.

“We truly believe that the yoga poses are neutral,” Lau asserts. “For us, it’s absolutely not worshipping an idol.”

“If I took the names out of the yoga context, a warrior [pose] is a lunge, chair pose is a squat. You’ve just swapped out the name. It’s a neutral movement or position. It’s the function that you import into the form that gives it meaning.”

Yoga poses derive their names from the ancient Sanskrit language. To avoid any confusion about “meaning”, Grace x Strength use only English names for the poses.

“Australians are looking for a spirituality that connects with the whole being.” – Ross Clifford

The need for Christians to tread carefully when appropriating yoga is a caution issued by Ross Clifford, Principal at Sydney’s Morling Theological College and co-author of the book Taboo or to do? Is Christianity complementary with yoga, marital arts, Hallowe’en, mindfulness and other alternative practices?

“If you are going to be missional about this, then you do need to raise the issue: will this cause offence to people who feel this is taking over … what’s precious to them?” Clifford told Eternity.

“Having said that, I think that for those of us who are missional, ministries like Holy Yoga do need to be seriously considered. This [yoga] is the main way that Australians are connecting with some sort of spirituality. Australians are looking for a spirituality that connects with the whole being.”

Clifford doesn’t buy into belief that yoga’s origins are separate to Eastern religions.

“I think it has direct roots to Hinduism, so I would rather be upfront and acknowledge that is a difficulty … The bigger issue is: do the origins of a possible discipline rule it out for others to use or be involved in?”

While Clifford says conservative evangelicals are still in “really strong discussion” about this question, he suggests a good starting point would be to ask those in missional contexts if and how they would use yoga as a form of outreach.

“I wouldn’t be surprised if many of them would say, ‘Well of course, what do you think we do in various cultures? We find commonality and, provided it’s not being offensive, we use those commonalities to bring the gospel to people. Like Paul used poets, so we will use disciplines without owning its origin and heritage, if we can be clear and honest to the gospel in that process.’”

Clifford does advise Christians to assess “who the practitioner is and what are they seeking to achieve” before engaging in yoga classes. But he sees Holy Yoga (and, therefore, Grace x Strength) as moving in the right direction in this pressing cultural conversation.

“What I like about Holy Yoga, is that it’s not just presenting a bland set of exercises. It’s intentionally seeking to use a holistic spirituality to lead people to Christ.”

“We do have big dreams and goals, and a vision to take it global.” – Josephine Lau

Meanwhile, Grace x Strength are set to launch their new Christian yoga channel and continue to build a global community.

“We do have big dreams and goals, and a vision to take it global … As long as we have instructors from all over the world, then we can take the gospel to the ends of the earth,” says Lau.

It’s a vision for which she is willing to continue to face opposition.

“What keeps us going is hearing the testimonies of people who have experienced Jesus through the classes. One particular student … came up to me and said, ‘I really want to thank you because now I’ve made it a daily spiritual discipline for me to stretch, which has really helped my body … You can’t discount that, but the more important and more rewarding thing for me was that she said, ‘Now I pray every morning, the way that you pray in class.’

Lau hopes that many more students will have the same experience, and invite friends to do Christian yoga with them.

“We don’t like to be shady about it … We’re very honest about what we’re offering. And we encourage people who are practising with us and invite their friends to also be very honest, because it’s a great environment. I have never had students walk out and say, ‘I hate your class because you talk about your Jesus thing’.”

“I have no idea,” responds Ron Hall when asked about why God would speak to…