How much does church shape a child? How important is church in a child’s life? How do children view and experience Christianity, God and their church? Some encouraging answers to those questions were revealed from the 2016 NCLS Child Survey in a paper released this week.

The NCLS report Faith Formation in Children at Church and Home paints a picture of positive and active spiritual life among churchgoing children. About nine in ten children of churchgoing families affirmed that they “know that Jesus helps me”, that “God means a lot to me” and that “God helps me lead a better life”.

About nine out of ten said they believe in God, with about one in ten not sure if God exists. Only 1 per cent indicated they do not believe there is a God. 83 per cent considered themselves Christians,with 15 per cent unsure and 2 per cent saying they would not identify as Christian.

The survey, which is based on a survey of about 10,000 church-attending kids aged 8-14, reveals that Bible reading and prayer are both strongly valued in the lives of child churchgoers, with about eight in ten saying “the Bible is helpful to me in my life” and “prayer helps me.” Only 4 per cent feel “going to church is a waste of time.” 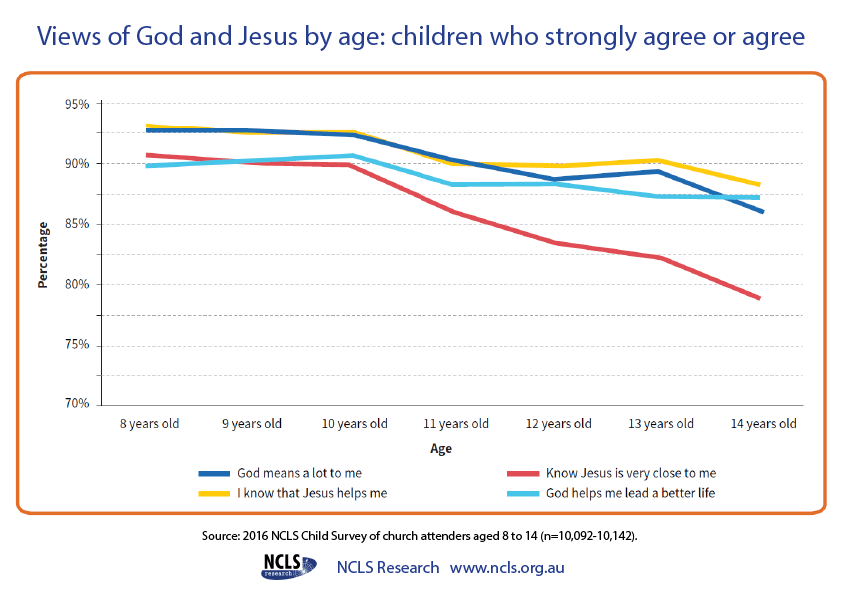 Unfortunately, some of the positive views decline with age, with the sharpest decline occurring from about the age of ten. The statement “I know that Jesus is very close to me” shows the greatest decline as children get older.

Most children gave positive evaluations of activities for children and youth and, a little less strongly, of church services. However, a considerable majority of children sometimes or often felt bored in services.

The NCLS paper suggests that local church leaders might consider bringing something appealing to children into their adult worship times, “where young minds can often cast adrift.”

“Also pertinent is that children express lower levels of a sense of God’s presence and lower levels of learning about God in church services. This might suggest churches include age-appropriate teaching and learning methods that involve all generations, from children to adults in their worship, prayer, preaching and teaching.”

The most popular aspects of children’s groups and activities were: being with people of their own age, learning about God/teaching time, and their leaders. Music and singing were the least popular activities, with 8 per cent saying they don’t like them and a quarter being unsure. 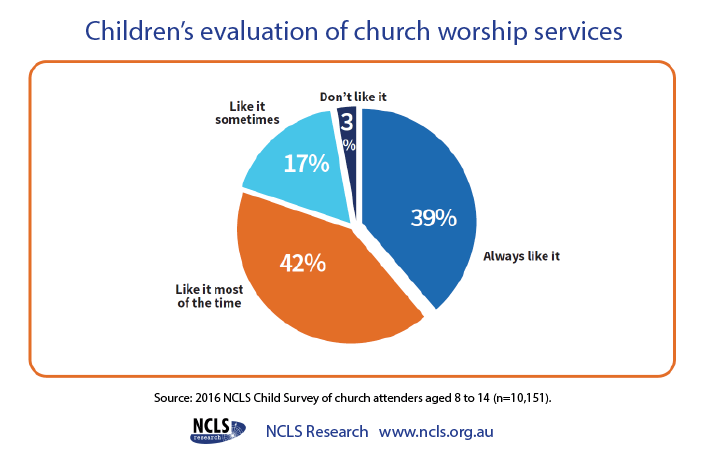 The children were forthcoming in naming their gifts and were active, to a degree, in mission and service. About three-quarters of children say they are good at being kind to people without friends (76 per cent), while around two-thirds felt they are good at having lots of new or different ideas, taking care of God’s earth, and standing up for what is right and fair. Less than half of children felt they were good at talking to others about God, and doing things up the front at church.

Nearly nine in ten reported they often or sometimes engaged in care for the environment, while 85 per cent said they asked God or Jesus to make the world better and 74 per cent helped to raise money for the poor. Only 16 per cent say they often talk to school friends about God/Jesus and 31 per cent say they never do this.

“Perhaps local churches could put greater emphasis on encouraging children to nurture each expression of their faith, in various ways, as they live day-to-day,” the paper notes.

“Given the lower levels of happiness and belonging in church services, perhaps incorporating things they are gifted or skilled at, within the church worship service, may go some way to addressing those evaluations that are currently lacking.” 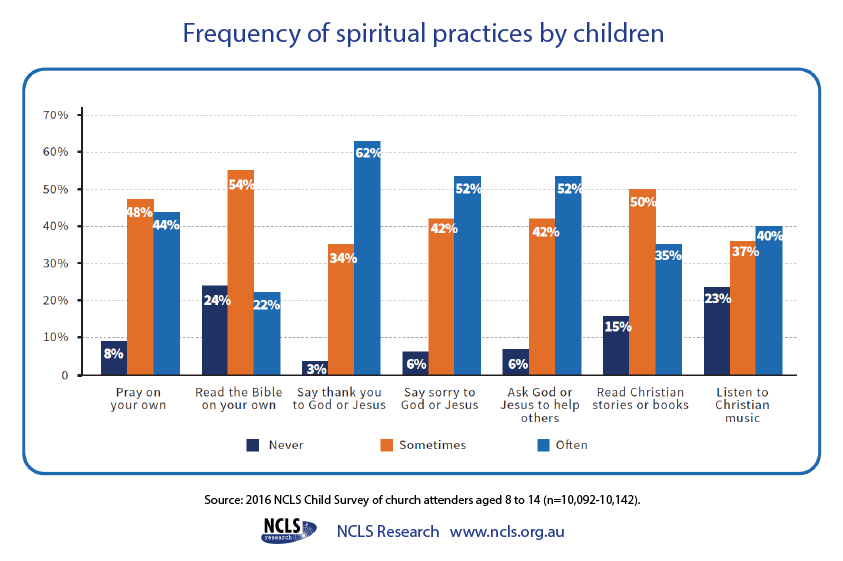 The children reported an active and positive spiritual life, and many use a computer, tablet or phone for faith-related activities. Gratitude, repentance and intercession were among the top ways children relate to God in prayer. Answers to questions about a range of spiritual practices showed 62 per cent of children often said thank you to God or Jesus; 52 per cent said sorry to God or Jesus and asked God or Jesus to help others.

The most frequently reported family activities were reading the Bible and praying (60 per cent). Just over a third held discussions about God or Christian faith, while almost all families sometimes or often talked about what they learned at church.

Most children sometimes had a family member talk to their about doubts or worries about Christian faith, although a third never broached the subject.

Parents – particularly mothers – and other family members played a vital role in faith formation in various ways, including through regular practices in the home such as prayer; however, discussion about the Christian faith was generally not as frequent. 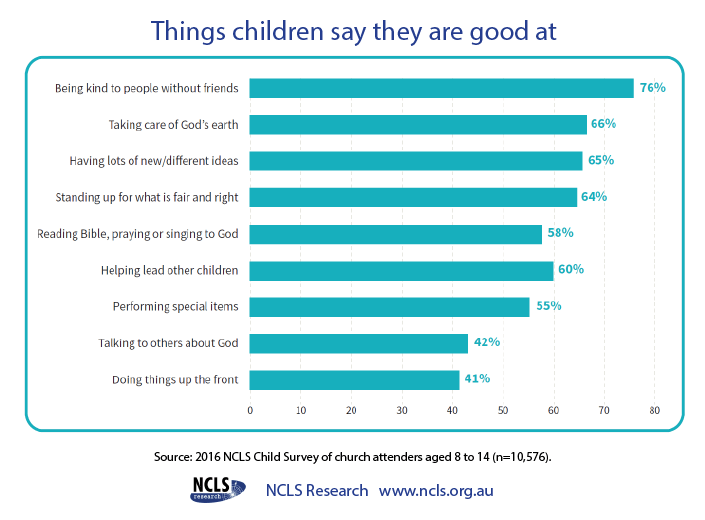 When asked about good examples of people who follow Jesus, 87 per cent identified Mum and 75 per cent Dad. Grandparents also play an important role for about two-thirds of children, along with siblings (47 per cent) and other adult family members (46 per cent).

Other adults also made a positive impression on children as examples of faith were their local minister or pastor (80 per cent), Sunday school teachers and other adults at church (70 per cent).

The results underline the crucial role played by parents in faith formation backed up by other adults forming a secondary support network.

In the paper, NCLS Research director Ruth Powell comments that potential areas for discussion in response to these results included how churches might support families to further integrate discussions about the Christian faith, including doubts and worries, into family rhythms and routines.

“Building on the positivity that children already express about church, how might church services be shaped to be increasingly sensitive to the life worlds of children?” she writes 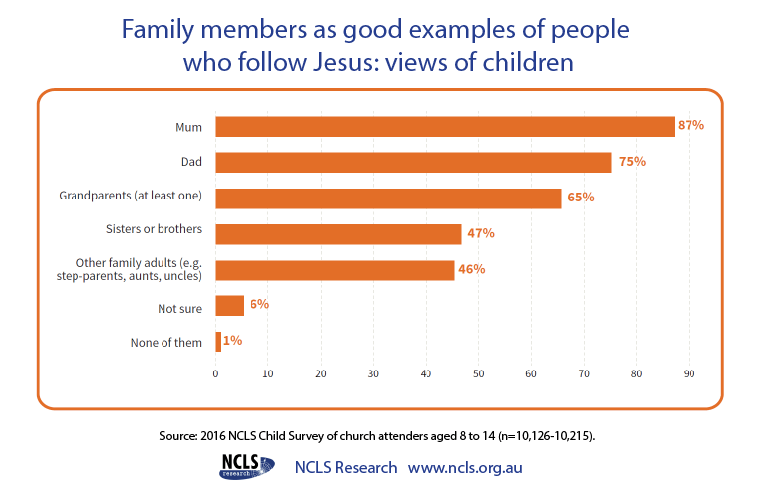 “What does it look like for child attenders – and for adults – to develop the expression of their gifts in mission and service in the wider community?”

The average age of children who took part in the 2016 NCLS Child Survey was 11 years. The largest age group in the survey, by a small margin, were 10-year-olds (17 per cent), followed by 11-year-olds (16 per cent), then 9-year-olds and 12-year-olds (15 per cent each). As age increases, the proportion of older children at church decreases. Meanwhile, the gender split is quite even, with 49 per cent boys and 51 per cent girls represented overall.