“Don’t tell me to study women just because I’m a woman!” That’s how Dr Michaela O’Donnell Long initially responded to her PhD adviser’s suggestion that she focus on women.

So she didn’t set out to become what she is – an expert on women and entrepreneurialism.

But after years of business experience gained at a creative brand and design agency Long established with her husband, Long continually found herself drawn to investigate the challenges faced by female entrepreneurs.

“My studies were more on entrepreneurship, the changing world of work, and vocation and calling – but the people I was most drawn to ask ‘What’s going on?’ about were always women,” she tells Eternity.

Long empathised with women who faced obstacles, competing priorities and “particular kinds of paradigms and have-tos that society has said ought to be true in the lives of women – especially working women”.  Long knew these only too well. And when speaking at events, she increasingly wanted to spend more time with the line of young women waiting to talk to her afterwards.

“So, it just was like a gravitational pull. I just found myself over and over back in that space.” 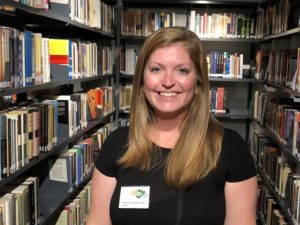 These days, Long is a strategist and Senior Fellow at Fuller Theological Seminary’s De Pree Center in Pasadena, California. She also lectures there in Practical Theology and Leadership.

Boiled down, Long’s work is about helping women flourish – in a practical sense.

Long sees creativity as an essential component of practical theology because “you’re not just following on a line of what’s happened before … It’s usually kind of some unknown territory. And any time you’re in unknown territory that begs for creativity, right?”

Long and her team have created a bunch of resources, ranging from articles and workbooks, to classes held in-person and online.

“What we’re called to doesn’t always look the way that our theology or the church or education or even our families has said it’s going to look, right?” – Michaela O’Donnell Long

“One of the things I’m most excited about right now is that we’re doing six-week groups for women. We ask upfront questions about calling and identity, using some tools we’ve developed and move through a cycle of spiritual practices.”

These spiritual practices are aimed at helping people thrive in a changing world at work.

“So the question then becomes ‘what does thrive mean?’ Part of that thriving would be actually feeling comfortable and confident, plus whatever their bar or measure of success is – as usually that’s pretty individually-defined. But then the bigger discernment piece of ‘what’s God calling for me’ – all of those kind of questions that are about purpose.

“What we’re called to doesn’t always look the way that our theology or the church or education or even our families has said it’s going to look, right? So there’s a lot of breaking down and down, building back up. That would be sort of the base layer at the heart of most of what I’m doing. It’s kind of a recalibration of expectations.”

Moving the needle on various levels

While Long doesn’t believe women have a harder time than men working through their purpose and calling, she does believe the challenges women face are distinct. One situation where she’s seen it come to a head is when women are navigating complex, interrelated relationships, such those between family and work.

Long refers to these wonderings as “inklings” and says her work is helping women design “guardrails” or “the sandbox” that create the space for women to plant the inkling seeds and see “how they might bloom or blossom”.

Is there a danger that encouraging women to dream big and develop their entrepreneurship will only add to an already too-full list of things to do and that ultimately set women up to fail? Long agrees it’s a danger and says the solution is in building an ‘ecosystem’ that nurtures women on multiple levels.

“On one level, it’s a big systemic set of expectations and realities. Then, it’s the nuclear family. And then probably the in-between level would be sort of the communal level,” which she describes as having changed greatly in the past 50-100 years.

“But if there are not, for example, the tools and frameworks in conversation to ‘move the needle’ on every one of these levels, then impressing on any people group – women or other – to go and change the world and have the moon, only to be met with brick walls left and right, is not actually setting anyone up to flourish.”

But, she qualifies, “some of the most formative work mentors in my career have been men who have championed me and opened doors wide for me, so I don’t want to discard or miss that. I know that reality. Even if I imagine myself five years from now or ten years or years from now, I will have moved there with a body of people including people who are a lot like me and people who are very different than me.”

“So because I’ve experienced the impact and men in my life in a positive sense (also, of course, at times in a negative sense), I think the entire ecosystem in which somebody lives has very real implications. So I do think it’s important to talk to and work on behalf of both men and women, for the sake of men, for the sake of women, and then for the sake of all.”

Long has recently been in Australia as Anglican Deaconess Ministries’ 2019 Visiting Fellow. As well as running a workshop for budding female entrepreneurs, she spoke at the ADM’s Annual Funding Event on September 4, where a total of $60,000 was up for grabs for Christian women. Long opened the event like a personal coach for each of the 12 women pitching for funding, likening their creativity to that displayed by God in the biblical book of Genesis. She shared about her own experience of standing in their shoes, pitching who she is and what she was doing, saying it’s a process that these women will have to continually engage in.

She encouraged them with this blessing: “May you confidently draw into the well of creativity that is within you. Every time you are dipping into this well, you are subverting the narrative that you can’t and you shouldn’t.”

Four women pitched in each of the three categories: “idea”, “prototype” and “start-up and beyond”. The initiatives ranged from creating spaces to bring the church and community together, to programs to support survivors of domestic and family violence, and resources to help those affected by sexual abuse.

Long said she was inspired to see such a breadth in the ideas presented. The highest amount of funding, $30,000 for a start-up, was awarded to Sarah Crowe, an ophthalmologist who has invented portable eye-testing kits and low-cost glasses, which she plans to roll out in developing nations such as Papua New Guinea and the Philippines through her 4eyes Foundation.

Another $15,000, for the best prototype, went to Julie Somerville, who is developing a chat bot to make it easier for those seeking compensation for sexual abuse to have their claims processed. The idea category winner, co-applicants Jessica Chilton and Michelle Walker received $5000 to develop more effective pastoral care resources for parents and schools, while all other women who pitched received $1000. Natasha Thompson from the Women’s Justice Network took out the people’s choice award of an additional $1000, which will help fund their advisory group made up of women who have experienced stigma due to criminal backgrounds.