Hwvar was part of a non-violent protest, locking herself to the front gate of Kirribilli House, one of the Prime Minister's residences in Sydney.
Love Makes A Way
Australia refugees

Hwvar Khoshnow was one of five Christian protesters who locked themselves to the front gate of Kirribilli House in non-violent direct action, calling for the evacuation of Manus Island. Here, she tells Eternity, why she did it. 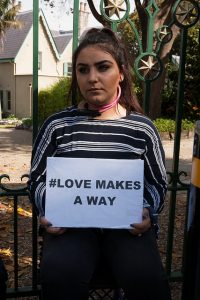 I’ve been involved in protests before, but I have not risked arrest before or participated in a “lock on”. The worsening situation on Manus was heavy on my heart and I was moved to do something in support and solidarity with those men on Manus Island. After years of mistreatment, cruel policy and detention, I wanted to ensure these men knew that they weren’t forgotten and the pressure to evacuate now continued to build.

Sitting beside my brothers yesterday with chains around our necks was extremely emotional.

I contacted my dear friend from Love Makes A Way, Jarrod MacKenna and told him I wanted to do something for our brothers on Manus. Jarrod is a wonderful human being who selflessly fights against injustice wherever it rears its ugly head and shines the love of Jesus in the darkest corners of the world. He had just recently come back from a secret, one day trip to Manus to meet with the men and bring their stories back to Australia. Not long after I contacted him, I found myself praying with some of my heroes of the faith, ready to take a stand for those on Manus. We were accompanied by a small group of incredible people who acted as support and were there to ensure our message was clearly heard and that the tone of our peaceful, non-violent direction action was understood.

Kirribilli House is the official resident of the Prime Minister of Australia, it was important to symbolically bring this message ‘home’ and garner the attention of the Malcom Turnbull and the Australian Public. The heart behind the action was simple, evacuate Manus now.

I feel deeply connected to the men on Manus, not only as a fellow human being, but as a refugee myself.

One of the most poignant moments of the action was witnessing ordinary Australians come down to support us. They thanked us, prayed with us, made signs, brought us food and water and cushions. One local woman, Suzie Gold, was so overcome with compassion that she sat by us and refused to move and was ultimately arrested with us. She told us that only two of her family members had survived the Holocaust and that she was determined to fight for a kind Australia, whose policies reflected the kind hearts of the Australian people. It was so encouraging to witness so many different Australians coming together, all with unique backgrounds and stories, to call for compassion and justice.

Sitting beside my brothers yesterday with chains around our necks was extremely emotional. They are very accomplished men I deeply respect and admire. I am nothing special, I am an ordinary 23 year old student studying social work at university. I love Jesus and enjoy reading.

I know that the only difference between me and them is that I have been given the opportunity to flourish in a safe environment, while they have been locked away for years.

I also happen to be a refugee. The term refugee has been used to instill fear into people. A refugee is a human being who has had to forcibly flee their home due to devastating tragedies like war, famine, persecution and natural disasters. I feel deeply connected to the men on Manus, not only as a fellow human being, but as a refugee myself. It’s been almost 18 years since I arrived in Australia. I was 6 years old. We are Kurdish and I was born in what was technically Iraq, under Saddam Hussein. We were persecuted. My dad was tortured for two years in prison. When he broke free, we had to run. We fled across the border and lived in a tent for two years where my little brother was born. After two years we were granted political asylum and had the incredible opportunity of starting over in Australia. I know that the only difference between me and them is that I have been given the opportunity to flourish in a safe environment, while they have been locked away for years.

The moment that chains were being cut from our necks and we were arrested was very overwhelming.

The men on Manus are my brothers. Behrouz Boochani (an Iranian Kurdish journalist and refugee who has been held on Manus Island since 2014) contacted us after our protest and sang a song in our shared Kurdish language to say thank you because he had “no words”, all I could do is weep. We all wept. I am sure that Jesus wept. It was deeply moving to hear his gentle voice sing, and even more moving that after all those years without freedom he still found the courage to sing.

The moment that chains were being cut from our necks and we were arrested was very overwhelming. We knew that we were safe, that we had somewhere to call home. The men on Manus don’t have that luxury. They have lived through horrors that many people could not fathom and it has been their resilience and will to live that has sustained them so far. They are human beings who have asked for our help and instead of welcoming them home we have used cruel policy to detain them. Our prayer is that the hearts of our leaders are softened. That they are reminded of Christ’s command to love and that they are evacuated now. New Zealand has offered to take many of the men and offer them safety and refuge, there are many options, keeping them on Manus is not one of them.

Hwvar Khoshnow joined Rod Bower, minister of Gosford Anglican Church, Michael Frost, the Vice Principal of Morling College, Jarrod McKenna, refugee advocate and pastor in Western Australia, and assistant pastor at Paddington Anglican, Byron Smith. The five protestors were arrested, along with a local Kirribilli resident, Suzie Gold, who heard about the protest and came and sat with them. Suzie was also arrested, after refusing to move from outside the gate. Charges have not yet been laid.

There will be no going home for the islanders of Ambae in Vanuatu who are being permanently evacuated.