Social media is a strange beast. However, as the primary platform for mass communication in the current age, many Christians are exploring new and creative ways to engage. One of the strangest attempts however has come in the incarnation of two of the oddest false prophets to ever walk the internet – Woke Jesus and Alt-Right Paul. 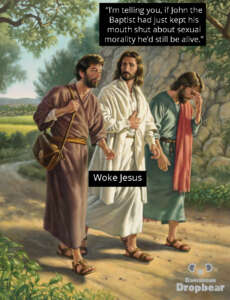 Woke Jesus appeared on the Facebook scene in early May, educating disciples about cis-normative labels, white privilege, vegan social justice. Using the simple idea of presenting a warped version of Jesus’ teaching as a satire of far-left ideology, the intent appears to be to draw people’s attention to back to the biblical texts and #ThingsJesusneversaid.

This divisive figure of Woke Jesus received early attention, delivering his first sermon at the Christian Media and Arts Conference 2021. Such was his success, it was not long before an anti-disciple came on the scene – Alt-Right Paul.

A Yin to Woke Jesus’ Yang, this aggressive libertarian and anti-vaxxer dedicated to uncovering Government conspiracies was designed to shine a satirical scriptural light on the far-right and the growing shift towards extreme positions. 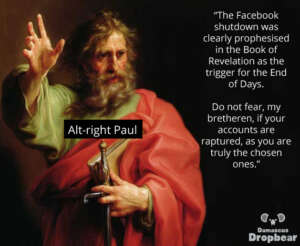 Unfortunately, in a somewhat layered irony, it appears Facebook has put heavy restrictions on Alt-Right Paul’s account due to his ‘misinformation’. This has, however, just seemed to confirm his suspicions of persecution, making him even bolder in spreading the truth around Bill Gates and 5G microchips in the vaccines.

The other day one of Australia’s most proficient theologians, Dr Michael Bird, tweeted about the need for more Christian satire in Australia. These new characters are certainly an attempt at just this – pushing boundaries, raising uncomfortable questions about beliefs, and using humour to create pathways to discourse that sneak across contentious divides.

Eternity caught up with the creator of Woke Jesus and Alt-Right Paul, Christian media charity the Damascus Dropbear, to find out more about their attempt to put the fun back in fundamentalism. 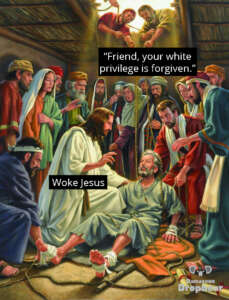 So, firstly can you tell us about Damascus Dropbear and the intent behind it?

Damascus Dropbear provides Fake News for the Faithful. It was launched near the beginning of the pandemic in 2020 as a way to effectively engage media, politics and culture with biblical concepts and Christian perspectives. If you look at the most shared and engaged with content of social media each day in Australia, you will see that satirical news sites are incredibly popular. So I guess it’s an attempt to bring salvation into satire, as well as satire back into salvation.

Why did you create the characters of Woke Jesus and Alt-Right Paul ?

Well, initially it was a natural extension of what we were already doing in overlaying current events onto famous biblical scenes as a form of biblical literacy. Woke Jesus, utilising the irony of his pasty white depictions in most Christian art, just seemed to be a great way to engage in the extremes of the often toxic and divisive debates. The beauty was that to understand the joke, you had to be familiar with the scriptural context, and we always encouraged people to go and read the actual verses for themselves which were usually the opposite of what was being presented. 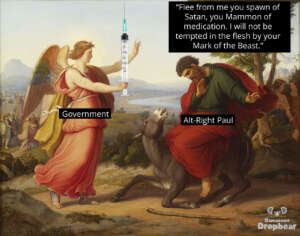 Alt-Right Paul came later and out of a slightly different motivation. It was really at the high point of the anti-vaccination protests in Melbourne and there was a recognition amongst the team that many Christians were increasingly susceptible to conspiracy theories and extreme libertarian interpretations (as opposed to a more biblically-centred understanding) of freedom and rights. Not only did Alt-Right Paul provide a way to critique the far-right, but it was also an opportunity to hold up a satirical mirror to the movement and give greater pause for thought for Christians getting involved.

In some weird way we actually see the characters bringing people across the political and religious divide together. Australia has a rich history of larrikinism, and if we aren’t able to laugh at ourselves then we have lost something significant to our national identity.

Are you concerned at all about potentially offending people?

On the other hand, if you can laugh not only at those things which you are deeply concerned about, but also the parodies and critiques of your own views, then the more likely you are to be able to listen to others with a measured response. Plus, we feel we are in good company with many biblical figures utilising offence and humour (including Jesus) to help people go deeper into understanding who God is and what He might be doing.

On that point, how do you justify twisting the words of the Bible for the sake of humour?

One of the best examples is in 1 Kings 22 with the prophet Micaiah. Micaiah is called to inquire to the Lord on behalf of King Ahab on whether he would be successful in war. Micaiah literally provides him a fake prophecy, telling him that he will be successful. King Ahab however, knowing Micaiah’s nature, doubts the authenticity and demands the truth. Micaiah then informs him of the actual Word of the Lord, that any war would result in defeat and the king’s death. It is really a hilarious scene, and some of Micaiah’s one-liners are pure gold.

Now, the irony is that King Ahab ends up disobeying the Word and subsequently dying, but the unique approach of Micaiah nevertheless achieved the desired goal. He told an obvious lie in order to challenge the king to curiosity, a curiosity that forced him to search deeper into God’s actual Word. In a way that is what we are doing with our ‘Fake News for the Faithful’, helping people laugh, then think, about the world and how the Bible speaks into it.

Okay, last question, what surprises can we expect in the future from Damascus Dropbear?

Ha, well there are certainly plenty of ideas floating around and there are simply so many idols in Australian society, including in the churches, that need a good Dropbear mauling. The problem is always a question of energy and resources, and how much we can actually afford to pour into the vision. The more we work at it though, the more we are convinced that this work around the comedy of redemption is tremendously important. As G.K. Chesterton said, humour can get under the door while seriousness is still fumbling with the handle.

You can see more of the work of Damascus Dropbear at www.damascusdropbear.com.au