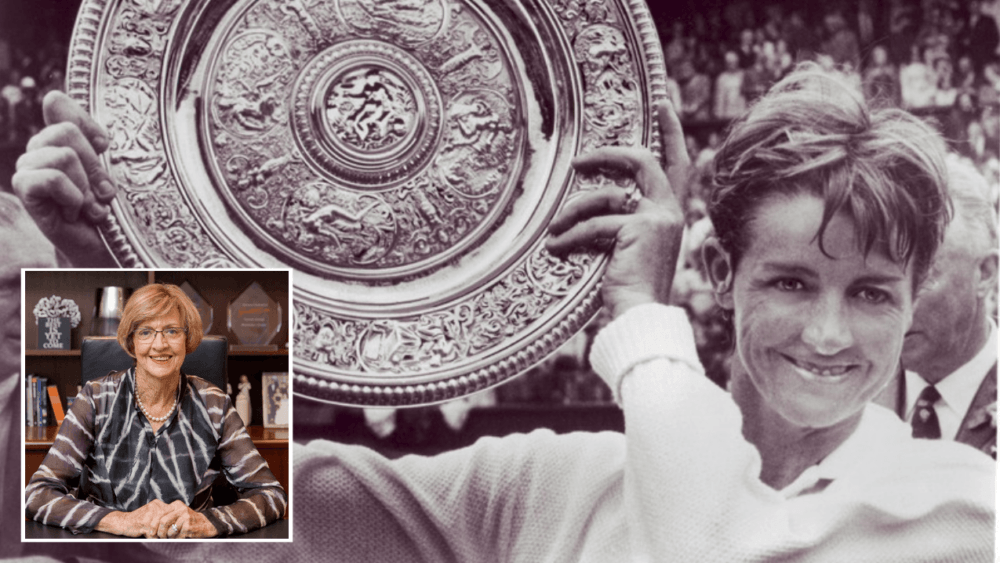 Margaret Court is taller than I expected, though it dawns on me that as a champion tennis player, I should not be surprised.

We meet at the church she pastors, Perth Victory Life Centre. It’s in an old converted warehouse, and as she shows me around, I see that between the prayer centre, the healing centre, the community services warehouse and the church itself, Victory Life owns almost every building in their cul-de-sac. This year, they celebrated their 20th anniversary.

…had she not lived across the road from those courts, she says it’s possible she would never have played. She has a kind smile and I soon discover she is passionate about the spiritual gifts of the Lord, because she won’t let me finish the interview and leave the room without praying for me, and giving me a lesson in speaking the heavenly language. She is confident in her convictions, but it wasn’t always like that for the tennis legend.

“I wanted to be the first Australian woman to win Wimbledon.” – Margaret Court

Her first racquet was a fence paling, and then she was given a big old wooden racquet from a family friend, which cemented her love for the game.

“I used to go across and hit on a wall, and I was very fortunate there was a coach and his wife there that had no children, [and they] took a great interest in me,” says Margaret.

The tennis centre in Albury was very strong, and with the help of the coach and his wife, by the age of 13 Margaret was winning tournaments. Some of the all time great players would come through Albury to play exhibition matches and someone watching Margaret hit a few balls suggested to her that she could be the first Australian woman to win Wimbledon.

“I always knew from a little girl my tennis was a gift from God.” – Margaret Court

“So somehow that goal dropped into my heart,” says Margaret. “I wanted to be the first Australian woman to win Wimbledon.”

The following year, in 1971, she gave her heart to Christ.

“God, where are you? I really want to know you.” – Margaret Court

She grew up in a Catholic home, and attended mass weekly, and says, “I always knew from a little girl my tennis was a gift from God, because I always felt there was something there that was bigger than me, or there was a strength, or there was just a knowing. And I knew he was there. I used to pray in my own way. But I always sort of thanked him that I was well, I thanked him that he protected me.

“But I remember going [to church] in France and they were speaking in Latin and French, and I didn’t understand a word they were saying. And I remember going ‘God, where are you? I really want to know you’. It can’t be up the front there in the building, it has to be more real than this.” Later that year Margaret travelled to America and stayed with some good friends. Margaret says that her friend kept going off to meetings and always returned with religious books that she’d try to pass along. Margaret threw out every single book except one about accepting Jesus.

When she returned to Australia she met an old friend who had previously been having marriage problems. But something was different, and upon enquiring as to the reason for the change, her friend confessed, “I went along to a meeting and gave my heart to Christ.”

Margaret said, “that’s interesting, I just read a book on that.”

“…it was like something lifted me up out of my seat and I went up the front, gave my heart to Christ, and the power of God hit me.” – Margaret Court

Margaret joined her friend at some of the meetings that were in the Catholic Charismatic renewal, and listened and came to realise they had something that she didn’t.

“I remember one night I went to a meeting with them before I went back on the tennis circuit and, I don’t know, it was like something lifted me up out of my seat and I went up the front, gave my heart to Christ, and the power of God hit me. I started speaking in the heavenly language and I had a real encounter.

“And then I went back on the tennis circuit,” says Margaret.

“Someone gave me Romans 10:9-10 on a piece of paper and I led so many people to Christ through that.” – Margaret Court

When she was back on the circuit, she says that even the press could tell the difference and asked her what had happened to her.

“It was so interesting because they’d look at me, and many of them had become my friends and I remember sharing with them and saying, ‘if you want what I’ve got, you can have it, you know?’

“Someone gave me Romans 10:9-10 on a piece of paper and I led so many people to Christ through that. I didn’t know the Bible, I didn’t own a Bible, coming from the background I had.”

In order to work on her tennis, Margaret had left home at 15 and moved to Melbourne to train with former tennis champion Frank Sedgman.

That was 1960. For the next 15 years, Margaret would travel the tennis circuit on and off. She achieved her first goal in 1963, being the first Australian woman to win Wimbledon. In 1965, after winning Wimbledon for a second time, she retired and returned to Australia, “because we used to have to travel 10 months of the year, and there was no money in it. It was amateur days, so you’d be away overseas a long time, and I loved my nation and I’d get homesick.”

Returning to Australia, she decided to relocate from Melbourne to Perth. As Margaret tells it, “I decided to retire, never to play tennis again.”

She met and married her husband, Barry Court in 1967, and then suggested to him that they go back overseas for one year and see the life she used to live on the tennis circuit.

“[I thought] I’m going to be the first mum to be number one in the world. I probably had one of my best years after that. I won 23 out of 24 tournaments that year and got back and won three out of the four grand slams that year too.” – Margaret Court

One year turned into seven or eight years, and Margaret pursued her goal of winning all four grand slams in the one year, which she achieved in 1970.

In 1971 she fell pregnant with their first child, and everybody expected her to finish up her tennis career. Margaret had other plans.

“I didn’t feel I was finished yet, [I thought] I’m going to be the first mum to be number one in the world. I probably had one of my best years after that. I won 23 out of 24 tournaments that year and got back and won three out of the four grand slams that year too.”

“I didn’t want much to do with Christianity any more because I became a mess in my life.” – Margaret Court

Back in Australia, having finished her tennis career, Margaret wanted to grow in the things of God, but she got tangled up in wrong teaching and was simultaneously diagnosed with insomnia, depression and a torn heart valve. She says, “I didn’t want much to do with Christianity any more because I became a mess in my life.”

At that time, someone from Full Gospel Businessmen (an organisation devoted to bringing the gospel to businessmen) approached her and invited her to go to a talk on faith.

She declined the invitation until she heard that the speaker was going to be a man called Fred Price, under whose ministry Margaret’s husband had been healed of ulcers, so she consented to go and listen.

At the lecture, Price talked about how faith comes by hearing, and this really struck Margaret.

“…it changed my life, the word of God.” – Margaret Court

“I knew there was a way out of what I was in, but I didn’t know how. How powerful the scriptures are that you could renew your mind to the word of God.

“I went to the Faith Bible Training Centre in 1982-83 and just sitting under the word of God – faith comes by hearing – and it was probably the middle of the second year I knew I was healed. I was healed of depression, insomnia; so it changed my life, the word of God.

“I just know what it did in my life, and it’ll do the same for anyone who wants to sit under the word of God, grow and hear,” says Margaret.

“I think the wonderful thing is that in our community services, you see a young mum come in [who] was on drugs, with a baby, and you see us helping her from there. She finishes up going to our Bible school and today she’s a policewoman in the country.

“…you see these people come through and their lives change and to me that’s more exciting than winning Wimbledon, because [the people] thought they didn’t matter and now they know in themselves that they’re somebody and that they’re valuable and precious, that God loves them.” – Margaret Court

“You just count those people who are disappointed or discouraged or they’ve been sick or they’ve been hurt or they’re broken and you see those ships restored again. I think that’s what it’s all about.

“And you see these people come through and their lives change and to me that’s more exciting than winning Wimbledon, because [the people] thought they didn’t matter and now they know in themselves that they’re somebody and that they’re valuable and precious, that God loves them. To me that’s the most wonderful thing.”

“I look back at that [Wimbledon] now and think, ‘did I ever do it? Did I ever really play down there?’” – Margaret Court

I comment to Margaret that it sounds like she’s echoing the Apostle Paul in Philippians 3, when he says,

But whatever were gains to me I now consider loss for the sake of Christ. What is more, I consider everything a loss because of the surpassing worth of knowing Christ Jesus my Lord, for whose sake I have lost all things […] Forgetting what is behind and straining toward what is ahead, I press on toward the goal to win the prize for which God has called me heavenward in Christ Jesus (Phil 3:7-8, 13-14).

“That’s my scripture!” she says. “God gave me that scripture when I first went to bible school. I look back at that [Wimbledon] now and think, ‘did I ever do it? Did I ever really play down there?’”

She has a kind of gospel forgetfulness about her, one that considers all she achieved in tennis as past. She’s looking to the future, counting her “past as done, that I may grow in the knowledge of Christ and press on towards the prize of the higher calling.”

"I am being bullied" says Margaret Court