Imagine a church minister in one of Australia’s major cities broadcasting his sermons to a nationwide audience and hosting regular dignitaries such as Prime Ministers and Governors-General. In the post-war era of the 1950s and 60s, the minister of Melbourne’s Wesley Church did just that.

Sir Clarence Irving Benson (1897-1980), was one of the leading church figures in the public life of post-war Australia. Serving as Superintendent of the Central Methodist Mission from 1933 to 1967, his pulpit was open to civic leaders from Sir Robert Menzies to Richard Casey. His Pleasant Sunday Afternoon ministry of guest speakers and corporate worship soon became a national institution, broadcast across radio stations to an Australia-wide audience.

From working-class man to evangelist and orator

Born in the Yorkshire city of Hull in 1897, Benson was raised in a working-class Methodist family and attended local schools where he developed an interest in history and literature. Desiring to serve in ministry, he went on to study at Cliff College, an evangelical Methodist College in Sheffield steeped in the Wesleyan holiness tradition.

Emigrating to Australia during the First World War, Benson settled in Melbourne where his preaching style attracted attention. According to the Methodist historian Renate Howe, Benson’s ‘conversational style of preaching and well-modulated voice complemented his tall and commanding stature’. Marrying Agnes Lyall in 1919, Benson was ordained in 1922 and ministered to Albion Street Methodist Church in Brunswick before assuming his role at Melbourne’s Wesley Church in 1926 as an evening preacher.

In 1933, Benson became the superintendent of Wesley Church and the Central Methodist Mission. As the quasi ‘Cathedral’ of Methodism in Melbourne, Wesley Church provided the ideal platform for Benson to launch his public ministry.

Benson’s signature ministry was his Pleasant Sunday Afternoon (PSA) meetings which drew large and enthusiastic crowds. Presented live and on radio, Benson’s PSA ministry became a “national institution”, featuring public figures who would speak on current issues from a typically moral and spiritual angle. PSA’s were essentially services but, instead of conventional sermons, the addresses had a broader range with the focus moving beyond biblical exegesis to critiquing worldly affairs such as post-war reconstruction, Cold War anti-communism, international relations, consumerism and moral concerns.

Friend of the famous and ordinary alike

Guests on Benson’s PSA platform ranged from the newspaper proprietor, Keith Murdoch in 1947, to the then leader of the Labor Party, Gough Whitlam, in 1967. His most frequent guests, however, were Prime Minister Robert Menzies and his External Affairs Minister, Richard Casey, later Governor-General. It was through the PSA that Menzies became acquainted with Benson as a friend, and the Prime Minister appeared on his platform 32 times.

Within the Methodist Church, Benson was theologically orthodox and morally conservative. His use of popular apologetics aimed at the ordinary person reflected his Wesleyan concern for the salvation of sinners. As well as being a prophetic voice in society, Benson was an evangelist who invited people to follow Christ.

To appreciate the cultural context of Benson’s long ministry, with its public gravitas and popular appeal, it is helpful to remember that Christianity had much greater cultural currency in his time with some 88-89% of Australians identifying as Christian and three in ten attending church regularly.

Australian society, of course, has secularised markedly since Benson’s day, with the Christian percentage now likely to be a minority for the first time. As such, contemporary Christians engaging in the public square cannot expect to enjoy nearly the same degree of publicity and traction.

Lessons from a successful public ministry

Nevertheless, the public ministry of Benson still holds instructive lessons for us today. 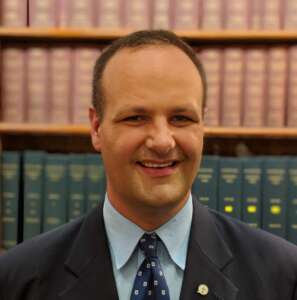 The author and historian, David Furse-Roberts

First, it underscores the importance for our church leaders and ordinary laypeople to engage with the civic leaders of our day. Whatever the prevailing religious climate, there is value in following the example of the prophet Daniel ‘to speak truth to power’. In an age of spiritual aimlessness and moral relativism, our political leaders, in their deeper moments of thought will still seek inspiration from the metaphysical, so it is a timely opportunity for us to commend the timeless message and truths of the gospel. It is an opportunity for the church to be the conscience of the nation.

Second, we must not grow weary in being the salt and light of the earth that Christ calls his people to be. This will be accomplished neither by the imposition of decrees, nor by laissez faire indifference, but by the patient art of persuasion. In the words of the late Evangelical apologist, John Stott, this is ‘to educate the public conscience to know and desire the will of God’. Benson sought to accomplish this through his PSA ministry and Christians today can do the same through means adapted to contemporary culture.

In an age of aggressive secularism, cancel culture and the censorship of unpopular Christian views, it is tempting for Christians to be despondent and resign themselves to the margins of society. This, however, would be an abrogation of our calling to be salt and light in the world. In modern history, the flight of pietistic Christians from confronting Nazism is a cautionary tale just as much as the fight of British evangelicals for humane labour laws is instructive. As Stott reminds us, ‘Christians must permeate non-Christian society’ and ‘Christians can influence non-Christian society’.

In practice, this will have nothing to do with ‘imposing’ our views on society, but everything to do with availing ourselves fully of our democratic rights to participate, to campaign, to vote, to stand for public office, to speak out and to be heard like every other self-respecting citizen. This was how the successful battles of the past were fought and won, from the Clapham Sect of Wilberforce to the civil rights movement of Martin Luther King.

Today, when each of us who are called to be salt and light can act to shine light into darkness and bring preservation to decay, the name of God will be glorified, the dignity of men and women will be uplifted and our world will be infinitely better for it.

This is an edited transcript of the address that David Furse-Roberts gave to the Evangelical History Association 2022 Conference at Alphacrucis College, Parramatta NSW on 19 March 2022