“Compassion Never Kills” is the slogan for a planned rally by pro-life groups behind the NSW parliament this afternoon as the vote over a euthanasia bill occurs tomorrow.

NSW is the last remaining state or territory not to have legislated a Voluntary Assisted Dying law. It is also singular in having both the State Premier Dominic Perrottet and the Opposition Leader Chris Minns opposed to changing the law.

“I oppose the Voluntary Assisted Dying Bill 2021,” the Premier told parliament in an emotional speech a few days ago. “This time last week I was in the last place that many of us would want to be: in a hospital, next to a bed, visiting a patient with a terminal illness. That patient is my grandmother. She is over 90 years old and now she is dying of pancreatic cancer. As I sat next to her, holding her hand, I could tell that she was in great pain and that she wanted it to be over. I got a sense, as much as anyone can, of why those in such pain would want to end it quickly. I completely understand what motivates those who have to sit powerless and watch their loved ones suffer. In some ways, that can be the most unbearable pain of all.

“…when it comes to suffering, it is to our hearts that we must turn because the answer to suffering is to not offer death, but care, comfort and compassion. A strong society protects and cherishes its most fragile members. This debate today is not about the details of the bill that is in front of us. It is not about the strengths or weaknesses of the safeguards, or the rights of medical practitioners, or the technicalities of who qualifies and who does not. It is so much bigger than all of that. This debate is fundamentally about how we treat that precious thing called human life. Our answer to that question defines what kind of society we will be. This bill at its heart enshrines a new principle – that we can intentionally help terminate the lives of certain people to end their suffering.

“This debate is fundamentally about how we treat that precious thing called human life.” – Dominic Perrottet

“Make no mistake, this is a culture-changing decision. Once we accept the principle of this bill, we cross a line and nothing will be the same as we will have started to define the value of life. It turns on its head a bedrock of our ethics – that we help, not hurt; that we offer hope, not harm. That is why every single member of this place needs to think very carefully about the ramifications of this bill because no safeguard can stand in the way of the fundamental shift we are contemplating here. Paul Keating called this our threshold moment ‘an unacceptable departure in our approach to human existence’.”

“I have made my view clear,” Chris Minns told a press conference.

“I don’t support voluntary assisted dying. The reasons I don’t personally [support it] is that it would codify the risks for a vulnerable person who is in the latter stages of their life, who may feel they are a burden on their family – on their loved ones – and that is a real concern. I don’t think it can be dealt with in the writing of the bill.”

The rally organised by Right to Life, Family Voice, and the Christian Democrats is scheduled for 4pm behind the State Library and is authorised for 1,000 protestors who must be double vaccinated. They need to register using the QR code on the rally leaflet which is below. 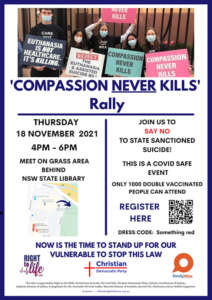 “We carefully distinguish assisted dying from suicide, avoiding terms like PAS (physician-assisted suicide), commonly used in the literature,” Natasha Moore from the Centre for Public Christianity writes in the Sydney Morning Herald.

“Yet in Oregon, where assisted dying has been legal since 1997, 2020 figures show that for more than 90 per cent of patients accessing PAS, the main reasons were not pain-related but ‘losing autonomy’ and being ‘less able to engage in activities making life enjoyable’.

“In the Netherlands and Belgium, euthanasia is now legal not only for those who are terminally ill but also for those with mental illness; a recent amendment in Canada has also seen Medical Aid in Dying (MAiD) extended to psychiatric disorders, though they were explicitly excluded in previous legislation.

“Ultimately, how are doctors to decide which deaths should be sanctioned, and which we should strenuously try to prevent?”

Another strong piece in the same paper by Parnell Palme McGuiness echoed concerns about the bill while writing as a supporter of VAD. Like abortion and treatments for gender dysphoria, he said VAD could/would become routinised, and not questioned or contested as McGuiness believes it should be.

“The VAD Bill introduced on Friday respects religious freedom by allowing conscientious objectors to decline to participate in the process of voluntary assisted dying. But it provides no replacement devil’s advocate – because how could it?

“Without this role, the voluntary assisted dying process could easily become an affirmative system, delivered by agreeable practitioners who share my profound belief in access to VAD and see themselves as facilitating a social good. This is not as unlikely as the bill’s authors might think.

“It has happened in other areas of complex psychological and medical healthcare. Many parents report feeling that gender dysphoria counselling leads too smoothly to hormones and surgery when other options could have been explored. Similarly, the process around accessing abortion has become increasingly routinised. A strong patient-centred process must ensure that women have access to the procedure but acknowledge that, without friction in the process, some women will report avoidable post-abortion grief.

“In each of these cases, the solution is not to make the medical treatment unavailable, but to acknowledge that complicated and far-reaching decisions need more than just advocates pushing them through in the name of progress.”

Dominic Perrottet, who is set to replace Gladys Berejiklian as Premier of NSW after her…