Shane Degen didn’t just wake up one morning and say, “I’m going to fill one of Australia’s biggest stadium with people worshipping Jesus.”

Shane, an evangelist, wants a stadium full of unbelievers to come to Christ. He’s not after a praise concert. But he has been dreaming about stadiums full of people for years. 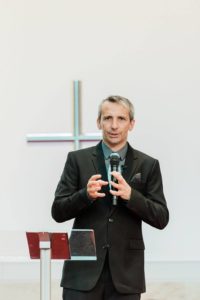 Shane Degen, an evangelist from Queensland, says he dreams of stadiums full of people for Jesus. Facebook

“It wasn’t just something that I woke up one morning and said, this is it. There are lots of mornings where I wake up and I get the next little footstep. And the next, and the next.

He says he’s not surprised that people think he’s crazy. He is just one man trying to do this, without a big church network behind him.

“For sure, people think I’m crazy. I think I’m a little bit crazy. You have to be to try something like this.”

Shane Degen is the man behind Jesus Loves Australia, his name for the plan to bring back mass evangelism. He calls it a “movement that wants to see Australia come back to Jesus,” through mass evangelism events that inspire pew-sitters to get out into their community and tell people about Jesus one-on-one.

“Our heart is to see the different streams of Christianity come together. Historically, when that has happened it has transformed cities; it’s transformed regions.”

Degen says the “two biggest moves of God” in Australia have been the Melbourne revival of 1902 and the Billy Graham crusades in 1959. And he says the thing that made those two moments in history was the body of Christ “doing the work.”

“It wasn’t just pastors and leaders and evangelists. The body of Christ door-knocked thousands and thousands of homes. They did the work. That’s what we want to see happen again.” With the “Jesus Loves Australia” event, Degen says he’s playing a long game. An expensive, long game. He’s hired ANZ Stadium at Sydney Olympic Park, with a capacity of more than 83,000 people, for a launch event of  prayer and music this Saturday, December 1. It’s the kick-off event for a year-long campaign that will culminate in what Degen hopes will be a two-week massive outreach in November 2019, with stadium events and local church events.

“There’s two sides to this – there are big events and then there are those that can be catalysts for citywide transformation –  real revival where communities turn back to Jesus. That’s what we want to see, not just another big Christian rock concert.”

Shane wasn’t always so passionate about Jesus. He grew up in an abusive environment in Toowoomba, Queensland, and saw God as “harsh, judgmental”.

“I didn’t know then that God was a loving father. I never really understood the relationship you could have.”

He ran away from God, fast. At 19, he’d dropped out of a science degree at university and started smoking marijuana. It didn’t take long before he was a heroin addict. He was part-owner of a nightclub in Brisbane’s Fortitude Valley. And then he was arrested for production of methamphetamine and unlawful wounding (“I stabbed someone,” he said).

He said, ‘How would you like to be standing before me on judgment day?’ In that moment, eternity became so real.”

In 2002, Shane was lying on the hard bed of the Toowoomba police watch house. He’d been in prison for six months, waiting for his sentencing. The next day, he would stand before the judge.

“I kept thinking that I could be ‘going away’ for a long time. There was that pending doom, fear of judgment. I knew I was in a lot of trouble. And the thought came to me, ‘What if I was in heaven answering to God?’”

Shane says he believe God spoke to him in the prison cell. “I didn’t hear a voice or see any lights, but in my heart it was so real. He said, ‘How would you like to be standing before me on judgment day?’

“In that moment, eternity became so real.”

Shane spent another year in prison, but says he was a changed man. He started attending a prison church service. He started reading the Bible. He also started doing a Bachelor of Engineering. When he got out of prison, he transferred to the Queensland University of Technology and completed a Bachelor of Aviation and Aerospace Avionics. He went to church, met his wife, and got accepted to a PhD in robotics and automation.

I could see non-believers surrounded by this darkness. And believers in the street had a light.

Shane says he was on a successful career track. Married, kids. His dream was to buy 20 acres out of town, build an airstrip and buy a plane.

And then, on an ordinary day, he was walking down Brisbane’s Queen Street Mall when his vision changed. Literally.

“There were people everywhere and, all of a sudden, I could see non-believers surrounded by this darkness. And believers in the street had a light. And there were hundreds and hundreds of people in darkness. There were hardly any believers.

“And in that moment, I realised there were untold millions going to hell.”

From that moment, Shane says all his ambition to own his own company, buy a house, finish his PhD, just left him.

“I needed to let it go. I realised all that stuff means nothing.”

He began the process of “unravelling” his life. He bowed out of his PhD, and was awarded a Masters for the research he’d already done. While he was finishing it up, he was spending his lunchtimes several times a week out on the Queen Street Mall, telling people about Jesus.

“I’d just walk up to people and say, ‘Hi, my name is Shane, I just wanted to ask whether you believe in Jesus.’

“I had no clue what I was doing. I had no training. And I was a nerd! I was the quietest guy, a studious guy. To walk up to stranger was not me at all. But I knew this: God was with me, he was in me and he wanted me to share my story. So he would give me the courage, and he would give me what to say.”

Since then, Shane has dedicated his life to telling people about Jesus. He says he started to see people coming to the Lord, lots of people. And after years of street evangelism, including starting a street evangelism movement for schoolies visitors on the Gold Coast, he started having the dreams of mass evangelism.

Shane has a wife and eight children, so his decision to leave his PhD and live a life on mission had a big financial impact. He says he “lives by faith,” and mostly on the generosity of people who believe he has been called by God as an evangelist.

When I speak to Shane, we’re having coffee at a cafe in Circular Quay in Sydney. We’ve only been sitting for 20 minutes and already Shane Degen has told two of our waiters about Jesus. He’s wearing a brightly-coloured T-shirt with the words “Y’all need Jesus” scrawled across the front, so I guess I should have expected nothing else.

“Would you like to have a friendship with Jesus?” he asks a nice waiter who brought us a second coffee after we spilled the first. Shane has already told him that Jesus loves him, and explained to him what happened when Jesus died on the cross. The waiter looks uncomfortable. But he’s listened for at least two minutes.

“Maybe not while I’m working,” the waiter says hesitantly. Shane smiles and stops talking. The waiter hurries away.

“Every day. At Coles, McDonald’s drive-throughs, Bunnings. Everywhere. And honestly, in 30 seconds like that I’ve seen hundreds of people say they want to know more,” Shane says.

“Everyone throughout history who ever did anything big for God all had a component of crazy in them.”

Shane Degen is the very definition of “evangelist.” The Oxford Dictionary defines “evangelist” as “A person who seeks to convert others to the Christian faith, especially by public preaching.” A sub-definition reads, “A zealous advocate of a particular cause.”

Shane’s cause is Jesus. And he does not stop talking about him.

Time will tell if Shane’s dreams of filling a stadium with worshippers will come true. He says he’s not expecting to fill the stadium on Saturday; he just wants to get as many pastors and people there as possible to pray that the stadium will be filled in November next year.

Maybe he is crazy. But, as Shane says himself, “Everyone throughout history who ever did anything big for God all had a component of crazy in them. But this isn’t about becoming a hero or being remembered. This is about the four million people in Sydney who don’t know Jesus. My heart breaks for them.”

Catch the vision of a stadium full of hearts on fire for...