On the cliffs overhanging the exclusive coastline of Palm Beach lies a piece of real estate with one of the best views in Sydney. But money can’t buy this multimillion-dollar property. Despite its potentially outrageous price tag, this land has been set apart for a unique purpose: it is – and always will remain – a Bible garden.

“When Gerald Hercules Robinson first mooted this plan to put a Bible garden here, some people thought he was quite crazy. Why would he sacrifice such a magnificent piece of land …?” asks Susie Holman, President of the Friends of the Bible Garden committee.

“But he was quite resolute. And I think now that people who probably were sceptical about it in the beginning have been won over and see what a magnificent gift he has given us.”

“The garden draws people from all over Sydney, Australia and the world.” – Susie Holman 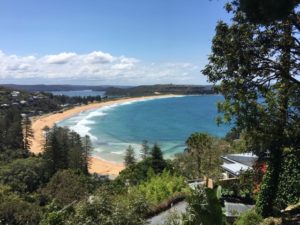 The view from the Palm Beach Bible Garden

Since the Palm Beach Bible Garden was completed 52 years ago, it has provided a quiet space for contemplation and Bible reading to thousands of visitors from around the world. Despite its rather secretive location – tucked away among winding, narrow coastal streets –awareness about the garden has grown over the years (due in part to publicity through Lonely Planet). It’s become a popular venue for baptisms, other celebrations and weddings, and bridal parties can often be seen draped over the sandstone steps on weekends.

“I believe Gerald Hercules Robinson wanted the Bible Garden to be a gathering place for people of all faiths,” Holman reflects.

“I think he would be absolutely delighted to know that the garden draws people from all over Sydney, all over Australia and all over the world. We regularly find in our visitors’ book people who are from Europe, all over America, everywhere. It’s just amazing how many people come here and are so delighted when they find it.”

“Such a glorious view of creation was too lovely for a house.” – Gerald Hercules Robinson

When Robinson – a devout Christian – purchased a package of land at Palm Beach in 1957, he soon decided that this block with such a “glorious view of creation was too lovely for a house”. After hearing about a Bible garden in the grounds of Bangor Cathedral in North Wales, and paying it a visit, Robinson was inspired to create a similar garden at Palm Beach. His vision was a place that would encourage “comprehensive reflection of biblical meanings and to serve as a collection of Holy Land plants”. 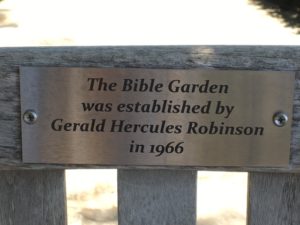 A plaque commemorating the garden’s creator.

“By then he was a man over his seventies. He worked very hard three days a week with pickaxe and shovel, and built walls, smoothed areas and propagated seeds that he had bought back from the Holy Land,” explains Holman.

Based on the design of the Welsh Bible garden, Robinson arranged his garden in chronological biblical order, with plants mentioned in Genesis at the entrance of the garden and those in subsequent books weaving down the terraced lawns below. It’s believed that Robinson planted 143 of the 148 plants mentioned in the Old and New Testaments (many of which were not native to or even available in Australia).

While most of the original plants did not survive Sydney’s humid climate, several of the trees planted by Robinson still remain in the garden, including two stone pines, a couple of carob trees, an oak, a weeping willow, a crab apple and some hardy grapevines. Along with the plants, the garden still contains biblical ornaments commissioned by Robinson, such as a plaque listing the Ten Commandments, a wooden cross and the last of 10 lamps commemorating the Old and New Testaments. Notably, a key focal point of the garden is a copy of the Bible, left permanently on the table, encased in a plastic cover to protect it from the elements.

“Everyone who comes here seems to find peace.” – Susie Holman 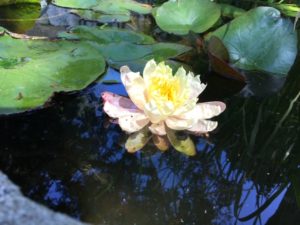 On the day Eternity visits the Bible Garden, it could not look more beautiful, and it’s easy to see why the original owners of the land, the Garigal clan, frequented this area. In the cool shade of a bench seat at the garden’s edge, we take in the sweeping vista of sapphire ocean lining the narrow peninsula that stretches to Barrenjoey Lighthouse. Behind us, the garden itself is almost as picturesque. The gentle slope embraces an intricate abundance of plants and wildlife. A pond, lined by waterlilies, water iris and papyrus, is home to a one-metre long green tree snake and a resident water dragon. A large blue-tongue lizard lives in the rocks by the stairs and countless birds are frequent visitors, including cockatoos and kookaburras who lend the garden a uniquely Australian character.

Even though it’s a week day and the location is remote, the garden has a slow trickle of visitors – from a woman meditating in the morning light, to a local man taking visiting family members on a tour. “I’ve been visiting here for 50 years,” he tells us, before reminiscing about his chats with Deaconess Beatrice Robinson, who helped maintain the garden after her father died in 1972.

The Bible Garden is now owned by Pittwater council, after the property was subdivided n 2006, following Beatrice’s death. In caring for the garden, the council receives great support from 120 Friends of the Bible Garden – around 20 of whom volunteer to tend the garden through a weekly roster and working bees. In return, the council has agreed never to sell the block and to preserve its original purpose.

“[Visitors] feel that it is a very holy place.” – Susie Holman 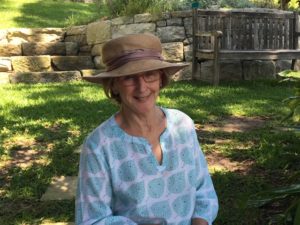 As a member of the Friends of the Bible Garden, Holman hopes the legacy of this place will continue for many generations to come.

“The purpose of the garden now is a peaceful, spiritual place for people to come in this very busy world and just regroup. It’s a wonderful place for people who have trauma in their lives. We find a lot of people come here who have had losses and relationships break-ups. Everyone who comes here seems to find peace. I think that is really important.”

Many people also say the garden brings them closer to God.

“The comments in the visitors’ book are varied but there is one common thread, and that is [the garden helps] people to worship the glory of God and his creation. People really get an enormous sense of that when they’re in the garden, with this magnificent view and the beautiful plants. They feel that it is a very holy place.”

Although Holman herself is not a “deeply religious person”, she has discovered personally a sense of peace through her involvement in the garden.

“I find this garden very spiritual for me. I feel very much at peace here … It is a very special place to be.”

User's guide to sex and pregnancy