“If you haven’t sold any in six months, you’re gonna have to go get a real job,” said Grant Emans’ wife, back in 2016, when he announced he wanted to start building tiny houses.

“So we sold about three in the first year,” Grant says, “but it was enough to keep my wife at bay. Then we started employing some people. And in early 2017, we sold 12 in a month.”

Grant had done his research – and not just by binge-watching Tiny House Nation, the Netflix television series that has enthralled viewers across the world. He had developed, with the help of an architect, a tiny house prototype then had built and sold it to a couple in his church. Plus he travelled to North Carolina to attend the first Tiny House Convention and do a weekend course and come up with some strategies for adapting the US buildings to the Australian market.

More importantly, though, Grant had a sense God had been guiding his path through many years in the building industry up to that point.

For Grant, the appeal of tiny houses is much deeper than a good business idea or a building trend.

“We make something that I believe is listening to God’s direction and being and using the resources he’s given us in a sustainable way. Or, as Scripture says, being a good steward.”

He believes there are many reasons why his Designer Eco Tiny Homes has flourished.

“First and foremost, I think God is at work. I think he guided me in my life to do home building for a long time to get the experience. And it meets a real need for affordable housing.”

“It’s also the most appropriate use of natural resources to house an individual, so I think it’s good stewardship of what God has given us.” – Grant Emans

“So in my view, it’s the right price. It’s also the most appropriate use of natural resources to house an individual, so I think it’s good stewardship of what God has given us.”

When people want to debate the subject of climate change with Grant, he approaches it as a spiritual conversation more than a scientific one. He always starts by asking what the person means by the term “climate change”.

“There’s no universally shared meaning for the phrase,” he notes. “For me, climate change means that humans are having a negative effect on the environment, and it’s changing. So I can tell you from Adam and Eve that climate change exists. The day that man chose to go do it his own way is the day that death was brought into the world. And if you refer to Romans, you’ll see that the earth is groaning.

“But also today, greed – personal greed and corporate – is its main contributor. We have enough solutions, but people don’t want to do them because they don’t want to be negatively affected financially. So that’s sin straight there. That’s greed. Why are people poor? Why are people hungry? It’s the same problem – it’s greed. We’ve got enough food. The same issue is at play.”

This is exactly why Grant is a big believer in tiny houses. Not only do they they offer sustainable, affordable housing solutions that will combat climate change by reducing a householder’s carbon footprint. But “on a spiritual level, I believe that man’s greed and sin is the cause of climate change because we chose to go against God’s rule.”

“And if God brings about its final destruction through an increase of carbon in the atmosphere and ultimately that creates a heating effect…  I’m not gonna speculate. And I don’t need to. I know that in my time, in my life span, that I need to do what I have to do to be a good steward of the world. And for me, from what I’ve seen in home building over the last years, the current trend is unsustainable. But tiny houses offer an incredible opportunity for people to live in a more sustainable way.” 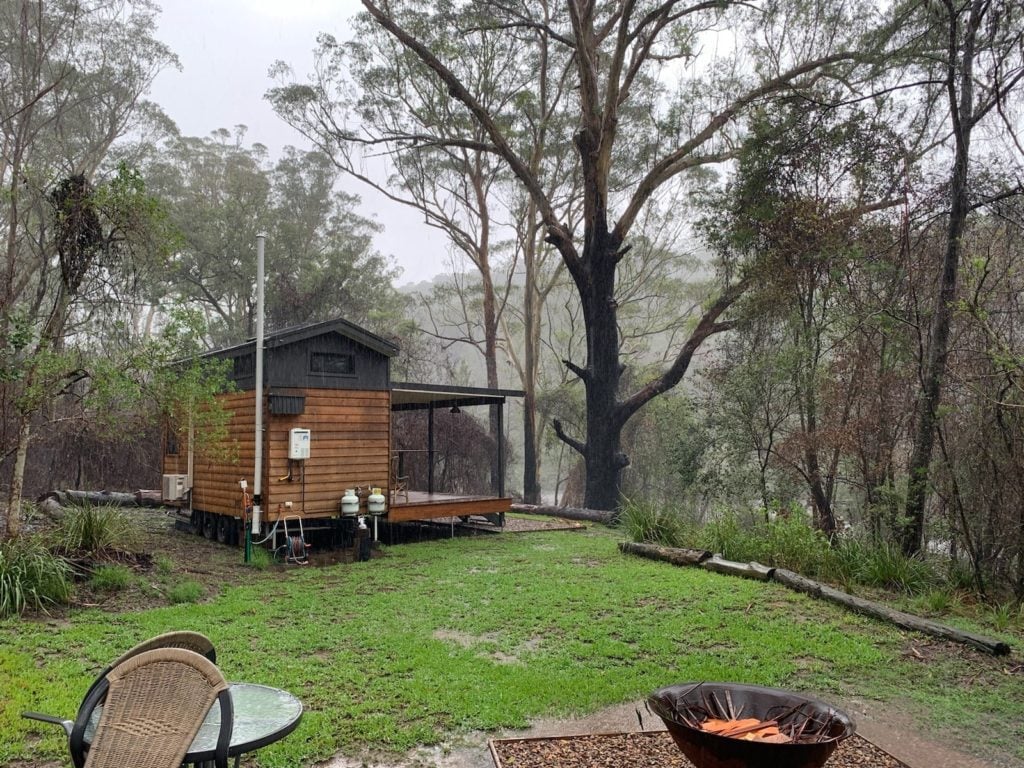 Tallarook Tiny Home Accommodation, Clyde River faced bushfire in August and flood in February when friends had to help tow the home to higher ground.

Grant has seen a lot of the home building industry since his early 20s, when he and his brother started their first company together with a $1000 investment from their father.

“A thousand bucks… off we went!” laughs Grant. “I remember we didn’t make much for a long time, but we learned some pretty valuable lessons. We worked together for 15 years home building regular houses … where an architect gives us a plan and we’d price it and we’d build it.

“But during that time, things were changing. A lot more talk about being more sustainable started coming into the picture. And when you start reading these things and then looking at what you do, you go, ‘These things aren’t in harmony with each other’.”

After training in sustainable homes, the brothers began a new business offering affordable houses, which scored a five-star sustainability rating out of a possible ten stars, in contrast to the average three-star rating of most new houses. But after a couple of taxing years, they decided the venture hadn’t quite achieved their hopes.

“There was still the element where people were seeing we were offering a good deal and were making the choice more out of finance than sustainability. It was like, ‘We’re not really hitting the mark’,” Grant says.

By 2015, Mark was ready for a change and decided to go into real estate with his father and sister.

“At that time I felt we had all this history in building and I wondered, ‘What’s the point? What does God want me to do?” Grant says.

“Then a few things fell into place. Something came across my desk and it said ‘if you have a caravan, you don’t need DA [Development Approval] approval to put one in your backyard’.”

Around the same time, Grant watched a TV program about the so-called “tiny house revolution” happening in the US.

“Right,” he thought. “I’m going to build one of these little tinies [as tiny houses are referred to in the business] as a prototype.”

So he did, using recycled materials. A few months and a trip to the US later, Grant started a business building tiny houses – with that six-month window of grace from his wife.

From early 2017 when the business started to take off, he hired more staff and moved the business from his home into a shed. As the business continued to grow, he found a bigger place and just recently the company has doubled its shed space again to keep up with demand.

“Now we’ve got a staff of about 17 and we hope to do about sixty [tiny house builds] this year,” he says.

While Grant hopes his non-Christian customers will read about his faith on his website, he also conducts himself in the most Christian manner he can.

“We employ both Christian and non-Christians. We have people that are staunch against it, but it doesn’t mean you don’t work with them,” he says.

“But every Monday morning we have a safety meeting and we discuss your typical safety issues in the workshop and then at the end of the meeting, we pray. I pray on their behalf.

“And you’ve got 17 people sitting around a room, in a workplace in the construction industry, hearing a conversation between me and God, on their behalf, asking for wisdom to deal with future contracts, clients to come, the right clients, safety, God’s provision, all this sort of stuff. And I don’t think that’s what they’ve ever seen before – not from the home-building industry, anyway.

“We try and conduct ourselves in them in the most Christian-like manner we can. But it’s not just about the contracts we sign, the appropriate pricing that we set, what we do with profits, donating where we can… it’s about, I think, every day them knowing that their boss trusts God. That the only reason we have work is that he trusts God. Now they may choose to reject that but we try and make that known.”

“I said I’d like to give a tiny house away roughly every two years … It’s essentially like a work tithe.” – Grant Emans

When it comes to giving tiny houses away, his faith is especially evident.

“I said I’d like to give a tiny house away roughly every two years … It’s essentially like a work tithe,” he says.

Grant contacted several organisations before finding the Salvation Army in Maroubra, which was the most ready to receive a tiny house. The Salvos have since fundraised and purchased another three tiny houses. They are being used as transition housing in Tamworth, the Miranda and Moree to take people from homelessness, to a tiny house, and  back on their feet and into social housing.

Now, Grant is anxious be in a position where the company can give away more of his beloved tiny homes.

“But I genuinely feel like God blesses the other work to pay for it. And until I hear otherwise from him, I’m going to keep doing that.” Everyday Christian: I grew up on social media and why I deleted it

Everyday Christian: I grew up on social media and why I deleted it

Last month I deleted all my social media accounts. Not simply removed the apps from…

Young & Free score Grammy nod for All of My Best Friends

Young & Free score Grammy nod for All of My Best Friends

Imagine having God's word in your language - for the first time

Imagine having God's word in your language - for the first time