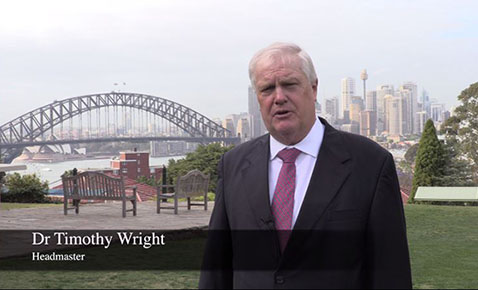 Religious institutions should have the right to employ staff who support their ethos, argues Dr Timothy Wright, headmaster at Shore in North Sydney.

A leading Anglican headmaster today branded an open letter supporting the right of Anglican schools to operate in accordance with their values a public relations disaster.

The letter by 34 heads of Anglican schools prompted angry protests by former students, who circulated petitions decrying the position of their former principals.

Dr Timothy Wright, headmaster of Shore in North Sydney, told Eternity today: “When we look back on the original discussion, the original letter, probably we were a little bit babes-in-the-wood-ish.

“We thought the central point would be clear, but it has not been clear – and it’s just been a disastrous piece of poor communication.”

Dr Wright joined in an attempt to change the conversation into a more positive direction. He said Dr John Collier (head of St Andrew’s Cathedral School) had “hit the button” in writing today that the exemptions in anti-discrimination legislation should be scrapped because they allowed the issue to be interpreted as about discriminating against gays, which was a caricature of the situation.

In a column in Sydney Morning Herald by Dr Collier applauded the former students who had circulated petitions for “demonstrating civic engagement and ethic concern for equal rights.”

He said a new law should be brought in at the next sitting of parliament to enshrine “positive freedoms relevant to Australians across a broad spectrum.”

Dr Wright agreed with this view. “It’s quite clear to me that you can’t use those exemptions without the whole thing getting focused into the right to sack gay staff and exclude gay students – and that’s just hopelessly unproductive, and it actually disturbs the wellbeing of both staff and students,” he told Eternity.

“I think we need to move separate legislation.” – Timothy Wright

“I think we need to move separate legislation. We need to state that institutions founded for religious purposes have the right to expect staff to support their ethos, as far as they can, and in some of our schools you must be a practising Christian to be employed. Generally, that’s not the case in the big longstanding schools.

“I think we need a definition of religious institutions – because we’ve got schools, we’ve got hospitals, we’ve got St Vincent de Paul …”

“It’s always a danger to get involved in trying to police people’s private lives.” – Timothy Wright

Dr Wright said today that the teaching staff at Shore included those who were openly gay.

“Look, I think if you speak with the heads of most of what you might call traditional, longstanding Anglican schools, that’s been part of their staffing for many, many years. Those people are very good teachers – often great contributors to the life of the school and no more likely, in my experience, to cause problems than heterosexual staff.”

“It’s always a danger to get involved in trying to police people’s private lives.” – Timothy Wright

Dr Wright said he was not “all that fussed” by what teachers did in their private lives.

“I think one of the challenges for us as a school is it’s always a danger to get involved in trying to police people’s private lives – and I think the church, historically, whenever it’s done that it hasn’t brought heaven on earth, it’s dragged hell up from the depths,” he said.

“I don’t think we want legislation that helps encourage us to police people’s private lives but to expect that in their work they uphold the mission and ethos of the school. I think it’s quite clear that in those schools we would probably want a right to appoint people of a faith background with that as a legitimate additional qualification.

“I would always be saying whatever your sexual orientation, that will mean a living relationship with Christ.” – Timothy Wright

He said the school’s philosophy of learning and education stemmed from a Christian view of the person, and “that does shape how we think and how we act. I think it also shapes some of the focus we have on what does it mean to flourish as a human being and, for me, I would always be saying whatever your sexual orientation, that will mean a living relationship with Christ.

“And we don’t want a restriction on that. We don’t want people saying you’ve got to teach all faiths or say that there’s nothing unique about Christianity – that’s where I think the protection of the ethos is about for me.”