“The fact that they get it 16 hours before America does – I just love that.”

For KING & COUNTRY’S Joel Smallbone has done “I don’t know, maybe 8 or 10?” interviews back-to-back by the time he talks to Eternity, but he is remarkably warm and energetic.

While I suspect his joy might actually be the result of delirium setting in after such a feat, and I’m certain the sheer relief of this being his final interview for the day – or the “closer” as he describes it – is a factor, Smallbone has another explanation.

“It’s just been nice,” he says, to spend time connecting with Australians and New Zealanders – even if they are media.

“There’s a couple of beautiful things that Australia represents during album releases – First of all, the fact that they get it 16 hours before America does – I just love that.”

Australia is, after all, the birthplace of Smallbone and his brother Luke – the other half of the award-winning Christian music duo. And the country holds a special place in his heart.

“I think it’s just the kinship,” he says. “There’s just a lot of different layers that register different for me – in a good way.”

For KING & COUNTRY’S new album What are we waiting for? launches tomorrow and Smallbone says “there’s a couple of beautiful things that Australia represents during album releases.”

“First of all, the fact that they get it 16 hours before America does – I just love that. I love that the first comments I ever get for a record come from my birth-land,” he says.

“There’s something about speaking to your birth-land that it just means something different being well received by Australia.”

Somehow, Smallbone makes it sound as though For KING & COUNTRY are just a couple of brothers from Oz having a red-hot go at the whole US Christian music caper. And, in some strange way, that is a good description of the attitude Smallbone conveys. He just doesn’t seem, to put it in colloquial Australian, “up himself”.

He’s got plenty of reason to be, though. As one of the music industry’s most respected and decorated duos, the brothers have won four GRAMMY Awards, 10 GMA Dove Awards, a Billboard Music Award, 13 K-LOVE Fan Awards, and their nine No. 1 songs have produced an astonishing accumulation of over one billion on-demand streams.

They’ve played to sold-out crowds in the U.S.A, Australia, Germany, Netherlands and New Zealand. Their last album Burn the Ships debuted in the Top 10 of the Billboard Top 200 Album Chart and has since propelled the duo to an industry-setting, six consecutive No. 1 singles – a couple of which are on this album.

And they’ve collaborated with the likes of Kirk Franklin, Tori Kelly, NEEDTOBREATHE, Timbaland and – wait for it – Dolly Parton.

Not impressed yet? The pair is committed to numerous philanthropic efforts focused on human trafficking, children in need, as well as programs in support of the arts.

Smallbone’s especially hopeful that Australians resonate with What are we waiting for?.

“I really think this record … it’s not an American record. It’s not an Australian record. It’s a global record,” he says. “I feel like in some ways it pulls Australia into the conversation in maybe a deeper way than we have in the past.” 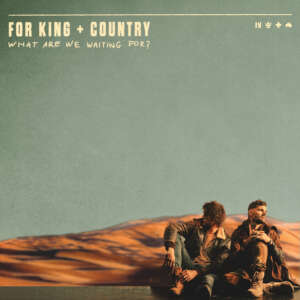 for KING & COUNTRY’S ‘What are we waiting for’ is available from Kooring stores nationally. Koorong

Smallbone says some of their previous records have been “deeply personal”.  And, while this one “has its way of being personal as well, it’s a wider record than some of the others.”

“So hopefully Australians find themselves in it. Even the ‘What are we waiting for?’ desert [image on the album’s cover] – it just feels more Australian. I don’t know.”

This is the first time For KING & COUNTRY have not chosen an album name that relates to a track on the album. Smallbone explains why.

“First of all, we want the album to be received and digested as an entire piece, rather than as a collection with a title track,” he says.

“But also, because there was something in the question ‘what are we waiting for?’ that really had pinged Luke and me in the process.

“And I think it means something different for all of us. My personal ‘what are we waiting for?’ is that I am waiting for the moment when I’m not waiting for something. And I think that part of the beauty of the question is that you find yourself in it.”

The global part relates to the global experience of the Covid-19 pandemic.

“We’ve just experienced something as a globe. Global suffering. Every creed, colour and country has experienced this pandemic. What do we do with that? Where do we go from here? What are we waiting for? is really driving at that question, and hopefully it will be a soundtrack as people piece together their lives and families and so on.”

“I feel like I can speak on behalf of America and Australia – and maybe the West in general – and just say that it seems like we’ve been in this period of finger-pointing, political tension, racial division, and social isolation. And, as a result, it’s sort of cascaded into this role of judgment and this (slightly less nasty, but still nasty) word “tolerance”,” Smallbone says.

(At this point I interrupt with an emphatic “Seriously!”).

“And c.) What if a more free, joyful, loving way to live is actually to set aside our prejudices and ‘tolerance’ or whatever else, and race towards empathy and compassion and the mystery of diversity and different people coming together to think and act and vote differently!” Smallbone continues, passionately.

“You know, maybe if we could get past some of these roadblocks of judgment, we could get to a place where we can relate in a deeper way.”

Is there something specifically Christian about that message, I ask? Could the same message come from a secular album?

Smallbone acknowledges that they often “cast a wider net” in their music and that, if you take a track like ‘RELATE’ or ‘Seasons’ and “break it off from the rest of the group” then “maybe they just become a social song or a love song or whatnot”.

But the two brothers hope people will digest the album as a whole and they’ve put deliberate cues throughout it for listeners so that it isn’t just “feel-good, fuzzy, go and hug the tree somewhere”.

“So it’s really the balance of the songs that I think gives the listener a cue that we’re looking at things through the lens of the redemption of Jesus Christ.”

While Smallbone is clearly a deep-thinking, nuanced and extraordinarily creative human, For KING & COUNTRY’S songs are characteristically restrained in both lyric and melody. The result is often a lyrical message which is strikingly accessible and a melody that can get stuck in your head for days.

Take, for example, the album’s third track, ‘Love me like I am’ with lyrics that go:

Or ‘Unsung hero’ – the song the brothers wrote to honour their parents that comes with a music video featuring home movies and photos from their childhood.

“What’s fun is that music video, most of the footage is inherently Australian because it’s our parents when they were young. I just love that sidenote,” Smallbone says.

“So we ended up writing a song about parents – and that could be grandparents, stepparents, foster parents, biological parents – and anything in between. It’s a song to those who have sacrificed so much, who, like anyone who gets in the ring of parenting, you get bloody and bruised and you don’t do it perfectly. You’re trying to work it out and dodge the punches,” Smallbone explains.

He qualifies that he’s “a massive advocate for working through past hurts and particularly on an extreme level”.

“But I think in our generation’s way of looking back at the traumas of our childhood and dissect where our parents went wrong – which is important – but what can sometimes get lost in it is just the beauty of going, ‘Man, they tried’.”

“Your parents showed up. They didn’t get a lot of thanks. They drained their bank account to raise you. They drove you to school. Like, they did all the things. So this song is just a simple song to go, ‘Parents, we see you. Well done.’