Backstage, in the cold concrete outskirts of the Allphones Arena in Sydney, people are walking with purpose in every direction. To one side, singer Jonathon Douglass, or ‘JD’ as he is better known, stands in front of a group of almost 60 people. It’s half an hour before the start of the fourth day of the biggest gathering of Christians in Australia.

JD jumps up on a chair so his voice can be heard.

“I don’t know about you, but I don’t want this to be about me. I want to be raising God’s name high.”

“In a setting like this, where there are thousands of people watching you, it’s easy to think you’re better than you really are.” — Matt Crocker

He begins to pray. Standing with him are the musicians, the choir and the lead singers of Hillsong’s worship team. They’re about to go on to centre stage before 22,000 people at the 2014 Hillsong Conference. JD encourages them to remember why they’re here: to praise Jesus, to serve the crowd, and build an atmosphere that inspires enthusiastic praise of God. The Worship team prayer meeting before heading out to main stage each morning for the Conference sessions.

JD is trying to balance what Joel Houston calls the paradox of the platform: “Drawing attention to yourself to draw it away from yourself; that constant tension between wanting to be a man of God and trying not to make a God of men, or yourself.”

Speaking during a leadership session about how he balances his high profile as a leader of the Hillsong Worship team with his regular life as a follower of Jesus, Houston says he’s coped with that tension to “varying degrees of success and failure”.

It’s an ever-present danger for Hillsong’s worship leaders. They’re front and centre of a church whose music sales reach into the millions of dollars. They take their place on the “platform”, as they call it, as the lights go down in packed stadiums that seat thousands, in cities all over the world.

The Worship team prayer meeting before heading out to main stage each morning for the Conference sessions.

Over 50 musicians and singers are in the praise and worship team at Hillsong Conference this year for the main arena alone, rotating through day and night sessions. More than 250 more will stand on the platform as part of the choir, string ensemble and dance troupe. Thursday morning’s praise session features 22 singers and musicians on the platform. JD, one of the front men of the Hillsong worship team this week, is one among many.

So is Matt Crocker, songwriter and singer for Hillsong United. He co-wrote the song some are calling the most important praise song written in years—This I Believe, based on the Apostles’ Creed. It might be easy for the success of the song to go to his head, but the number of songs being sung and singers up the front keeps his role in perspective. Dave Ware on the platform.

“In a setting like this, where there are thousands of people watching you, it’s easy to think you’re better than you really are. But there are so many others putting in the hard yards too,” Matt says.

Dave Ware is a worship pastor in Sydney and part of the leadership team of Hillsong Worship. He started out volunteering to sweep the floors, looking for a way to serve at church, when one of the creative leaders brought him into the music team.

The Hillsong Worship team has a co-leader system to help people work up to leading songs on the platform. Dave started out co-leading with Jad Gillies who coached him about how to gain trust with the congregation and create space for worship.

Now Dave’s a lead singer on the new Hillsong Worship album for the song ‘Heaven and Earth’. This morning was supposed to be a break time for him, after a big couple of days of service on the platform. But when one of the other worship leaders put their hand up and said they needed a break, he volunteered to go back on.

“It’s important to be honest about your limitations; not being afraid to say, you know, I’m not a rock-star, my voice is gone, I can’t be on this morning.” 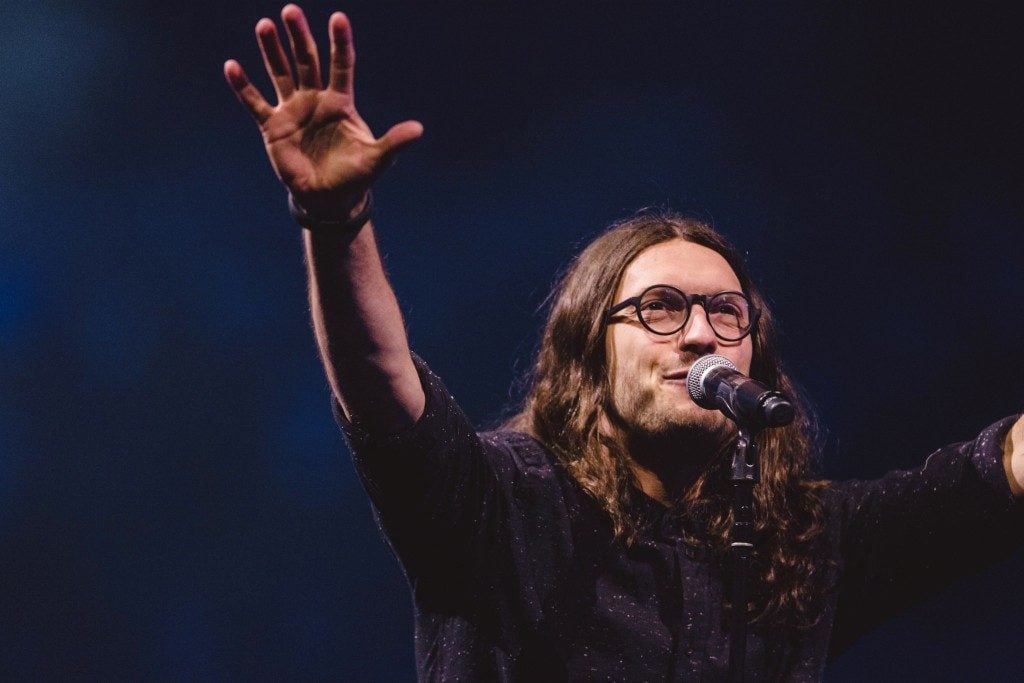 JD leads the thousands of Hillsong worshippers in song.

Annie Garratt, who leads the worship team at the original Hills Campus at Hillsong in Sydney, says the platform is a vulnerable place to be. The energy required to lead 20 minutes of worship at the start of each session at Conference, and a similar amount of time at each church meeting every week takes its toll (particularly, one can only guess, if one of the songs on the set list is ‘Your Love is Relentless’). Not everyone is ‘on’ all of the time, and some songs can indeed feel relentless.

“Leading worship is not about how I’m feeling. I know I’m called to do this. If I’m having a bad morning, I have to speak to myself before I go on: ‘it’s not about me, I’m here to grab people and lead them to Jesus’,” she says.

At a break-out session on worship leading, Jad Gillies, who oversees the worship leadership teams across Hillsong’s Australian campuses, told hundreds of keen music leaders that worship is not about you.

“Humble yourself. You’re there to serve. We’re not up here to create Christian rock stars. You’re on the platform only because you need to be high enough so people can see you.”

Backstage, the group of praying musicians disperse as the time draws near for the start of the day’s session. The lead singers grab their microphones, and the big red stage door opens out into the arena, where thousands of conference delegates are milling to find their seats. It’s only 9.30am, but a Mexican wave has broken out in the nosebleed section.

How quickly the singers go from that quiet reflective prayer to the black expanse of the platform, as the lights lift upwards and the drums pound an opening beat.

“Salvation sounds a new beginning,” we sing. And the singers raise their hands in worship.